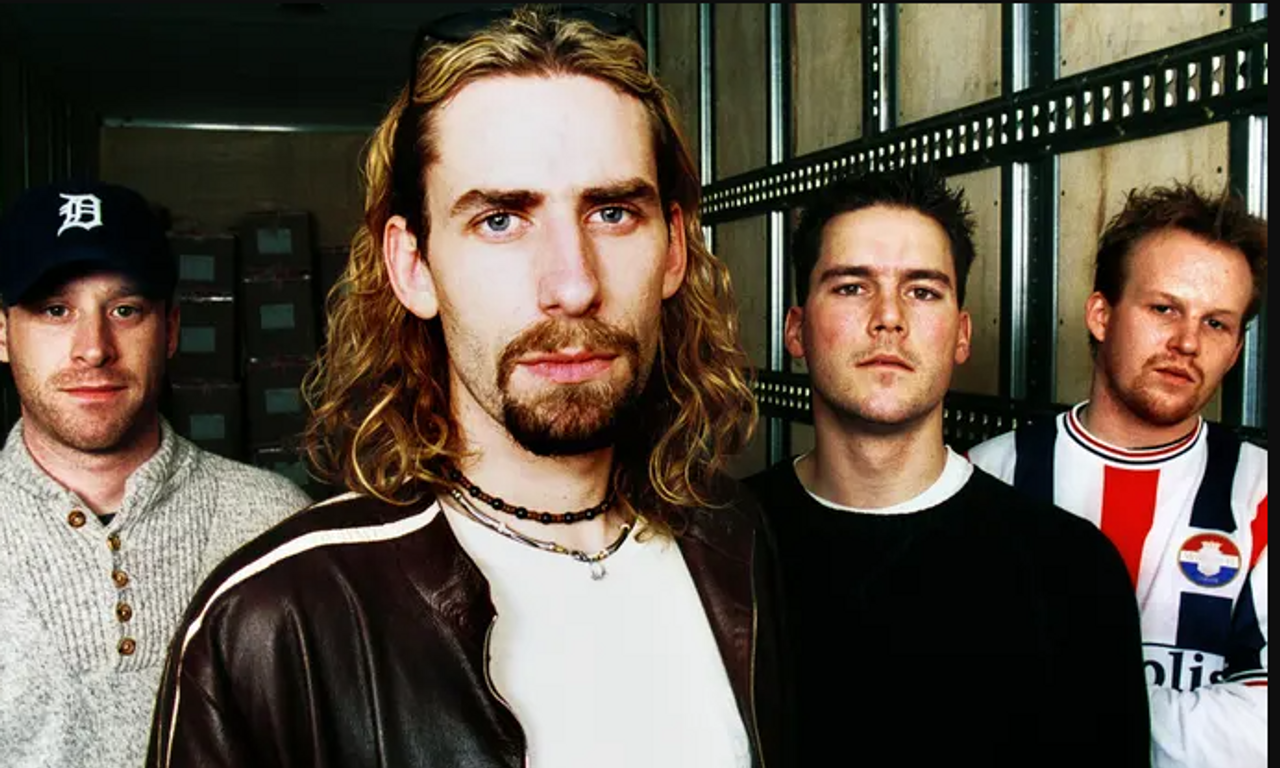 This time 20 years ago, Canadian band Nickelback hit number one on the Irish Singles Charts with ‘How You Remind Me’.

The track spent a month at the top of the charts and ended the year as the 8th-biggest selling track in the country.

The song ended the 2000s as the 4th most successful track on the Billboard Hot 100 above the likes of ‘I Gotta Feeling’, ‘Hey Ya!’ and ‘Lose Yourself’.

‘How You Remind Me’ was played 1.9 million times in that decade alone on American radio – to call the song a hit is underselling it.

Chad Kroeger’s lament about a bad relationship helped set Nickelback on the path to fame, but helped the band simultaneously become a punchline.

Nickelback quickly became a by-word and synonymous for bad music with large swathes of the music-buying public and critics alike, but 20 years is a long time in music.

Over the last 10 years, rock music has all but vanished from the radio, and the argument can be made that Nickelback were simply the right band at the wrong time.

To be clear, Nickelback were never a Beatles level band where every song was a diamond-cut classic to be passed from generation to generation, but the hatred the band get is comically outsized.

One could make the argument Nickelback put the nail in the coffin for rock music, but to lay the blame at their feet is unfair.

The cultural climate of the early 2000s was the perfect breeding ground for rock music, and considering the dire times we’re living in now, a band like Nickelback would and could hit the spot with the masses.

In the last decade, unashamedly populist pop music has become championed by critics which feels like a course correction.

Carly Rae Jepsen has become a critical darling for music that would have been written off as disposable rubbish in 2002.

If pop music can undergo rehabilitation, surely Carly Rae Jepsen’s compatriots can get the same treatment?

In the context of 2002 rock music, nu-metal was riding high, with acts like Slipknot, Limp Bizkit, Papa Roach occupying the column inches and radio airplay slots, and the sub-genre of post-grunge was starting to rear its head.

Around the time ‘How You Remind Me’ hit number one, The Strokes were the hottest band in Europe and LCD Soundsystem were about to become the favourite band of the most annoying person at house parties.

In Lizzy Goodman’s peerless ‘Meet Me In The Bathroom’ that explores the rise of New York indie music in the early 2000’s, the rise and fall of The Strokes is covered in painstaking detail.

Former NME Editor Conor McNicholas is one of the interviewees in the book, and describes the state of rock music circa 2001.

Per McNicholas, “Post-Britpop there was this terrible nether-land that was filled by Travis and Coldplay.”

“Suddenly when The Strokes turned up, we were the cool kids again,” he recalled.

This story reflects the state of music journalism at the time; The Strokes were cool and Nickelback were the dinosaur band.

NME gave Nickelback the award of “Worst Band In The World” in 2003, which further illustrates how music journalism of the time treated the band.

While critics were salivating over The Strokes, Nickelback were being written off for being one-note, cheesy and self-serious.

In truth, Nickelback’s only sin was being simple.

They existed in the middle ground between the in-your-face nu metal of the early 2000’s and the smart, allusion-heavy garage rock music of the era.

Nickelback are your quintessential steak and chips band; you know exactly what you’re getting when you listen to one of their tracks.

Yes, ‘Rockstar’ got overplayed in 2008 to the point of exhaustion, but that song is unapologetic in wanting to give listeners a good time.

The Strokes quickly lost the run of themselves by being too clever by half and nu-metal bands found that being angry could only work for so long.

Nickelback still persist to this day in large part because they play it safe and keep it simple.

Nirvana are the most influential band in rock music history next to The Clash insofar as every band with a guitar and drums were snapped up by record labels in the hope of finding the next big thing.

The 1990s saw pretty much any guitar band signed up by record labels, and Nickelback were signed by Roadrunner Records, a label that specialised in heavy metal.

Nickelback were a band with two moderately successful albums under their belt before they rocketed up the charts with their ballad.

After the events of September 2001, harsh, in-your-face rock music fell out of style, and while audiences still wanted rock music with a bit of edge, they didn’t want anything particularly challenging or taxing.

Nickelback were the perfect band to fill this gap.

The Alberta band are seen as the face of post-grunge, and the success of ‘How You Remind Me’ spawned countless imitators and derivatives.

Thanks to Nickelback, groups like Puddle Of Mudd, Creed and Audioslave became radio favourites, which depending on who you ask was a welcome change of pace for popular rock music or a nail in the coffin.

The Canadian band have sold over 50 million albums worldwide, still sells out stadiums to this day, and live on through internet meme culture.

Nickelback haven’t bothered the pop charts since Bertie Ahern was still in office, but to be fair very few rock bands have.

The 2010s were a disastrous decade for rock music, with trap-influenced rap music and EDM becoming the order of the day.

The decade was crying out for a band that played their own instruments and knew how to play a few chords on the guitar, but rock music fell out of fashion with the general public, with the ridicule Nickelback endured playing a decent role in making sure rock music remains buried.

Rock music in the 2010’s had a qualifier attached.

Arctic Monkeys and Tame Impala fit under the “alternative” label with very few riffs, Royal Blood and Black Keys were certainly successful but weren’t troubling the likes of Justin Bieber or Ariana Grande and even Metallica’s most recent album was greeted with a collective “well, that’s nice.”

The genre peaked in the early 2000s, and it’s fair to say that bands are afraid of being an unambiguous rock band for fear of getting the same ridicule as Nickelback.

Granted Nickelback had 3 albums in the 2010s, and their 2014 track ‘Edge Of A Revolution’ is Gal Gadot’s ‘Imagine’ cover levels of cheesy and tone-deaf, but it’s a testament to how much of a punchline Nickelback was by 2014 that they were no longer the internet’s punching bag.

It is very tricky to predict what the next big trend in music will be – pop-punk is suddenly hip again and Glass Animals are chart-toppers? – but rock music will always exist in some shape or form.

Nickelback and Kings Of Leon are probably the last unapologetically rock band to ever trouble the charts, but that isn’t to say the genre is dead forever.

It took film director Penelope Spheeris showing W.A.S.P guitarist Chris Holmes blind drunk in a swimming pool to the horror of his mother to help kill the glam metal movement.

Every genre has some turning point moment that makes audiences turn away, and the era of rap dominance on the charts will soon come to end.

Straight-down-the-middle rock music will make a comeback, and if Blink 182’s Travis Barker can become an elder statesman for pop-punk and Olivia Rodrigo can score a big hit by paying homage to Paramore, there may be room for Nickelback in this world after all.

Frontman Chad Kroeger spoke with Canadian newspaper the National Post in 2019 and discussed the hate the band has received during their time in the limelight.

Kroeger demonstrated thick skin and resilience when discussing the hate, and has even grown to embrace it.

“I don’t think that all the haters and the critics know how many favours that they’ve done for us, because otherwise, we would just be this just whatever band and now we’re this controversial band.”

“Everyone’s like ‘I hate them’ or ‘I love them’ — whatever it is, people are talking about us.”

“Everybody knows that if you make a video and you put the word ‘Nickelback’ in it it’s going to get a minimum of a million views. Every single time.”

“So it must be interesting in some way, you know. Love ’em or hate ’em. Without that, we would just be Green Day.”