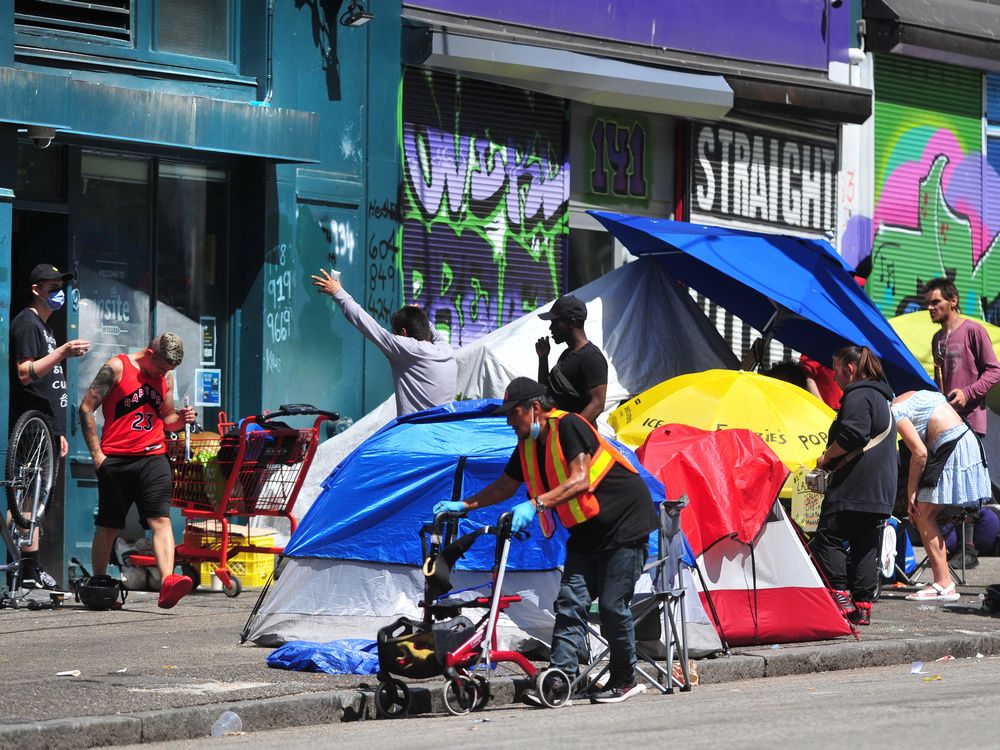 Vancouver Fire and Rescue Services Chief Karen Fry on Monday ordered that up to 150 tent/tarpaulin structures that have appeared this month on Hastings Street in the Downtown Eastside be removed by Thursday morning because they pose a fire and safety hazard.

According to the order, last Thursday fire inspectors toured Hastings between Carrall and Main streets and found entrances had been blocked to several buildings, there was an accumulation of combustible materials against buildings, firefighter access to buildings was blocked and there was unsafe storage of propane (as well as open flames.)

Fry said this was a danger to life due to risk of injury and fire. Many of the buildings along those two blocks are old and wooden. As a result, the hundreds of homeless people living in the temporary shelters have been ordered to remove those shelters as well as any propane bottles by Thursday at 9 a.m.

On Monday afternoon, the City of Vancouver issued a statement advising of Fry’s order and stating there was an urgent need to “accelerate structure removal” and that the order would “expedite the process.”

“Should a fire occur in the area in its current condition it would be catastrophic, putting lives at risk and jeopardizing hundreds of units of much needed housing,” the city statement read.

The city said the situation had been worsening since July 1 and had grown significantly more dangerous due to the increased number of tents and decreased accessibility on the sidewalks.

July 1 was the date the city’s engineering staff stopped their daily “street sweeps” in which garbage crews — supported by the Vancouver police — dismantled unoccupied tents and disposed of them, including personal items.

This practice had angered the majority on Vancouver council who supported a motion from Coun. Jean Swanson to put an end to the practice and led to an apology from the engineering department for not respecting people’s property. The motion also called on the city to work with the ad hoc organization Alternatives to Street Sweeps Working Group and to establish storage areas for people living without shelter (of which there are an estimated 250 in the DTES).

Stewart defended his government’s actions on homelessness, stating that in recent times the three levels of government had opened 1,100 non-market housing units at shelter rates in Vancouver.

He said that his office was in contact with provincial and federal government housing officials, attempting to secure more money for the people living in the Hastings Street encampment. He said non-profit housing providers also needed to assess their ability to take on some of the tenters.

A city spokesperson said: “Our hope remains to be able to remove structures along Hastings Street without the need for VPD presence to support the work. This will take co-operation of the community partners and people who are currently living in tents and gathering along the sidewalks.”