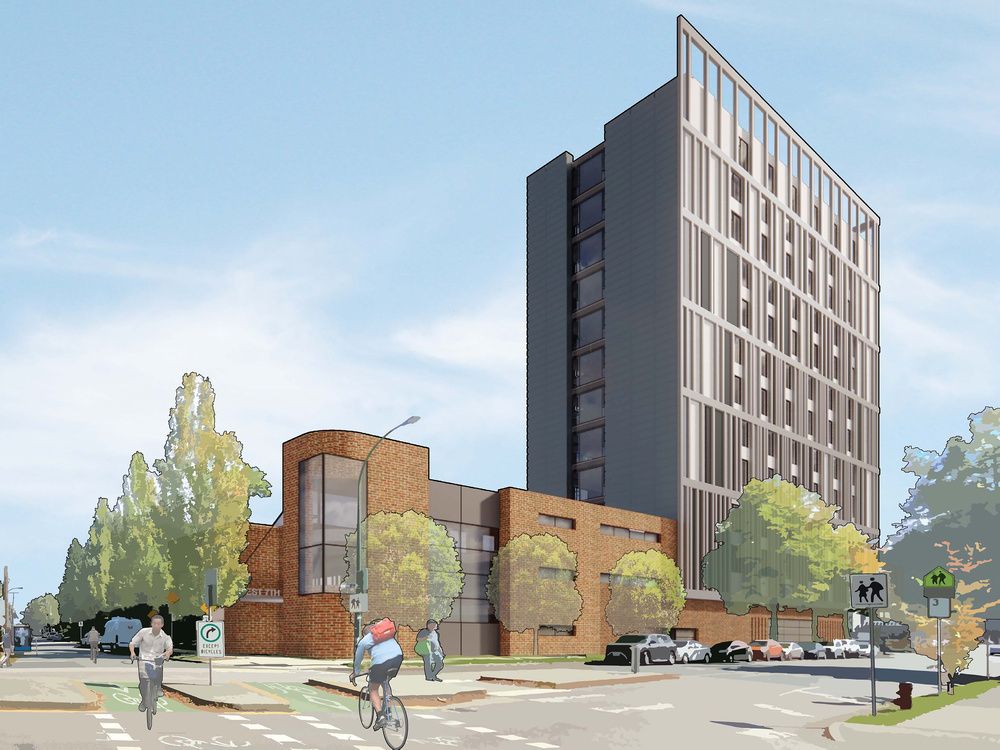 Vancouver city council has approved rezoning for the second of five B.C. Housing developments in the city that will create 424 suites for homeless singles.

On Tuesday night, council voted in favour of rezoning a city-owned site on Arbutus Street in Kitsilano between 7th and 8th Avenue (alongside the planned Arbutus subway station) to permit a 13-storey building with 129 one-person social housing units offering mental health and other supports. The project will be managed by the MPA Society, a long-standing non-profit agency with 220 full-time employees.

Each unit will have a kitchen and bathroom and occupants will have security of tenure, said City of Vancouver director of Housing and Homelessness Services Celine Mauboules. She said that 99 per cent of the estimated 250 people living in tent/tarpaulin structures along Hastings Street at the moment would jump at the chance to occupy one of these units.

Last week a community group called The Kitsilano Coalition asked the City of Vancouver and B.C. Housing to reappraise the Arbutus social housing project after former housing minister David Eby fired the board of B.C. Housing. They were fired because it was found the agency sometimes hands out multi-million contracts without a rigorous process to ensure the best provider is chosen.

Some neighbours were concerned about the impact the new development would have on safety in the area, fearful of a similar situation to when the 147-unit Marguerite Ford social housing project on the 200-block of West 2nd Avenue opened and generated over 700 police calls in 18 months. The development is also across the road from an elementary school.

Coun. Colleen Hardwick, who is running for mayor in the October municipal election, was the strongest advocate for those neighbours and voted against the project. Councillors Melissa De Genova and Sarah Kirby-Yung also opposed the project.

Hardwick said 75 per cent of 300 speakers at council were opposed to the project, including mental health researcher Dr. Julian Somers, retired provincial court judge Tom Gove — who ran the downtown community court — and the staff of the nearby Sancta Maria House recovery home for women.

“Instead of standing up and demanding a better model, the majority of city council accepted the failed model presented by B.C. Housing as good enough,” she said.

Coun. Adriane Carr — who backed the project — noted that former mayor Gregor Robertson had promised to end homelessness by 2015 and that it was a false promise with homelessness in the city “worse than ever.”

Coun. Lisa Dominato said the community consultation process for the project was lacking, but the MPA Society had a good reputation and would work to create a good mix of tenants.

The project was backed by the rest of council and Mayor Kennedy Stewart.

“As more and more neighbours are pushed to the streets due to a lack of supportive housing, this project provides hope of a better way forward,” Stewart said in a statement.

“129 residents will soon have their own place to call home, with wraparound services which will ensure they are well supported.”

Part of council’s approval was that the MPA Society and B.C. Housing create a Community Advisory Team to hear about any concerns once the project is operating, that a flashing pedestrian controlled traffic light be installed at 7th and Arbutus and that the project consider offering more than just single-person occupancy in the units.

The other B.C. Housing project that has been approved is on the 1400-block of East King Edward Avenue. This will be a 14-storey building with 109 units operated by the Vancouver Native Housing Society.

The three projects that have not yet received rezoning approval in order to go ahead are a planned six-storey building at 2930 Renfrew Street offering 50 single units operated by Lu’ma Native Housing Society, a six-storey 64 unit development on the 2500-block of South Grandview Highway run by Community Builders and a six-storey 72 single unit project at 1925 Southeast Marine Drive operated by The Kettle Society.