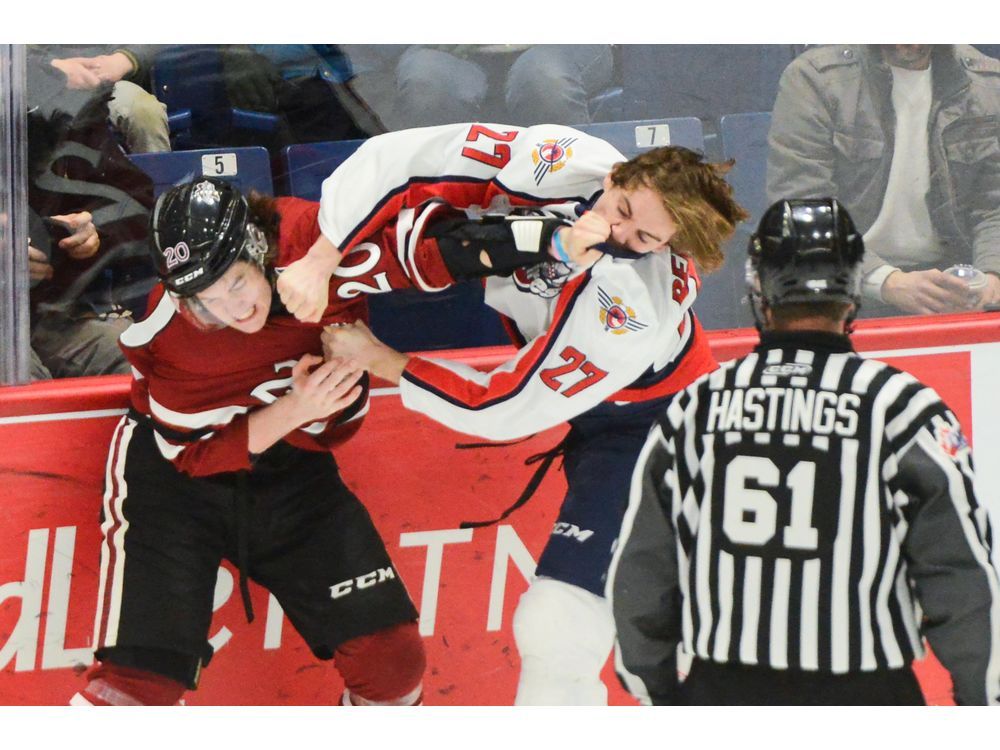 COVID-19 has made the quest for a West Division title a far steeper climb for the Windsor Spitfires.

The Spitfires were in Guelph on Friday to face the Storm for the fourth time this season. In a normal season, it would have been the last regular-season meeting against the Mid-West Division squad.

However, Friday’s game marked just the midway mark of the season series between the two clubs, who will now meet seven times this season.

“We try to control what we control and take care of our own business,” Spitfires’ general manager Bill Bowler said. “There’s no sense complaining, you just deal with it.”

Windsor is playing its entire regular-season schedule against Western Conference teams, which means added meetings against conference rivals due to COVID-19.

The Spitfires fell for the first time in four meetings on Friday with a five-goal blitz in the second period carrying the Storm to a 7-1 victory over Windsor before 2,500 at the Sleeman Centre.

It marked Windsor’s first loss in regulation in seven games. For the Storm, who sit second in the Midwest Division and fifth in the conference, it moved the club to within five points of the Spitfires, who are fourth in the conference. The top four teams in the conference receive home-ice advantage in the first round of the playoffs. Guelph also has a game in hand.

However, this year’s schedule is far from balanced. When the league reshuffled its schedule and extended the season, Windsor actually drew an extra road game in Guelph to end the season while losing a game against the Saginaw Spirit, who sit last in the West Division.

Meanwhile, the Flint Firebirds, who currently lead the West Division, have gotten most of the schedule breaks caused by the COVID-19 pandemic. Flint will play Saginaw 15 times this season, which is almost a quarter of its entire schedule, along with 12 meetings against the Erie Otters, who are last in the Midwest Division.

“It is what it is,” Spitfires’ head coach Marc Savard said. “There’s nothing we can do. That’s just the COVID era.”

Flint’s lead atop the division has been aided greatly by a 9-4-0-1 record thus far against Saginaw and an 8-0 mark against Erie.

Flint, which beat the Sarnia Sting 6-0 on Friday, now sits seven-points up on Windsor with the Spitfires still holding three games in hand.

“They (the Firebirds) have an easier road, but we’ll just worry about ourselves,” Savard said. “Whoever is next, we’ll play.”

On Friday, the Storm used a big second period to erase an early Windsor lead as Guelph extended its winning streak to three games.

Pasquale Zito put home his own rebound to put the Spitfires up 1-0 after 20 minutes, but Cam Allen and Ryan McGuire score 31-seconds apart early in the second period to give the Storm the lead for good.

Sasha Pastujov added another on a two-man power play and Danny Zhilkin and Ben McFarlane scored 15-seconds apart in the final two minutes of the second period to put Guelph in control with a 5-1 lead.

Pastujov and Valentin Zhugin scored 47-seconds apart late in the third period to complete the scoring as the Spitfires allowed seven goals to an opponent for just the second time this season.

The Spitfires return home on Sunday to face the Sting at the WFCU Centre. Game time is 4:05 p.m.

Sunday’s game will mark the final game Windsor will play with 50 per cent fan capacity at home with the OHL announcing on Friday that, in accordance to new provincial guidelines, it was eliminating capacity restrictions along proof of vaccination beginning Tuesday.