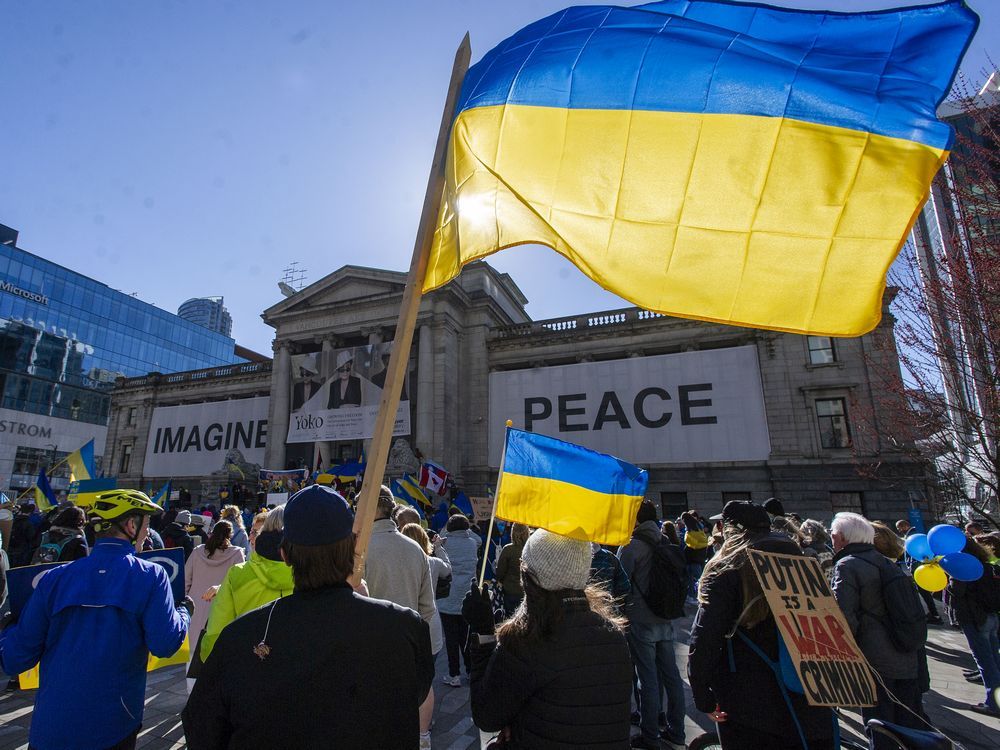 Mila Chayka, who grew up in Cherkasy in central Ukraine, stood at the edge of a massive crowd at the Vancouver Art Gallery Saturday collecting donations to send to her native country.

“This is my homeland and my heart is broken,” she said, visibly emotional.

“My husband’s cousin has been living in the subway in Kyiv for days. She finally escaped, she’s on the border (of Poland) right now.”

Chayka was among more than a thousand supporters of Ukraine gathered in downtown Vancouver to protest the Russian invasion.

Just as they did at a mass gathering last weekend at the art gallery, supporters waved blue and yellow Ukraine flags and held signs reading “Close the sky” and condemning Russian President Vladimir Putin.

Many people dressed in blue and yellow. Vinoks, the traditional Ukrainian crown of flowers, could be seen on the heads of women throughout the crowd.

Chayka said it was important to inform the entire world about the war in Ukraine. She has relatives who live in Russia who don’t believe Russia started the war. “Many people in Russia still believe there is no war in Ukraine,” she said. “They are being brainwashed.”

“When I call them and tell them there is war in Ukraine and we need to do something they say, ‘Oh, there is no war, Russian troops are doing a peaceful operation saving Ukrainians from Nazis.”

“I have a niece who lives in Moscow,” Chayka said. “She’s young. She’s progressive. She understands what’s going on. But she says, ‘We are scared to go on the streets and protest. People are being thrown in jail.’”

The rally happened as Prime Minister Justin Trudeau prepared to head to several European capitals to strategize with allies as fallout from Russia’s invasion of Ukraine intensifies.

Trudeau will spend next week in meetings in London and Berlin as well as Riga, Latvia, and Warsaw, Poland, saying he is joining partners to stand against Moscow’s aggression and strengthen democratic values.

“The biggest and strongest response we’ve had is actually in crippling the Russian economy, demonstrating to all Russians that Vladimir Putin made a terrible mistake,” he said Friday.

Olga Moldon was out with her two children and five grandchildren for the second weekend in a row. Her grandkids were selling bumper stickers with a variety of messages of support for Ukraine to raise money to send to Ukraine.

Her husband’s family was from Khardiv, the city in southern Ukraine that was recently overrun by Russian forces.

Moldon said she speaks daily with family and friends back in Ukraine, and recently let them know that Canada was accepting Ukrainians fleeing the war but no one was interested. “None of our friends want to leave Ukraine,” she said. “They want to fight.”

She said everyone she speaks to asks why the international community hasn’t put a no-fly zone in place over Ukraine. “Close the sky, this is what everyone asks for now,” she said.

Alex Kubyshyn, a burly Ukrainian-Canadian who has been in Canada for 40 years, said he’s only been sleeping three or four hours a night for days.

“Last night was maybe five hours,” he said, “so that was a bonus.”

His mother has been hunkering down in a bunker for the last “10 days or so” Kubyshyn said, and his best friend from childhood had joined a militia and was preparing to fight.

He said Ukrainians appreciate the Canadian government’s support with lethal weapons but stressed that they needed air defence like ballistic missiles and aircraft or international support to create a no-fly zone over Ukraine.

“The Ukrainian army is well trained and prepared,” he said, “they will not give up.”

With files from Tiffany Crawford and The Canadian Press