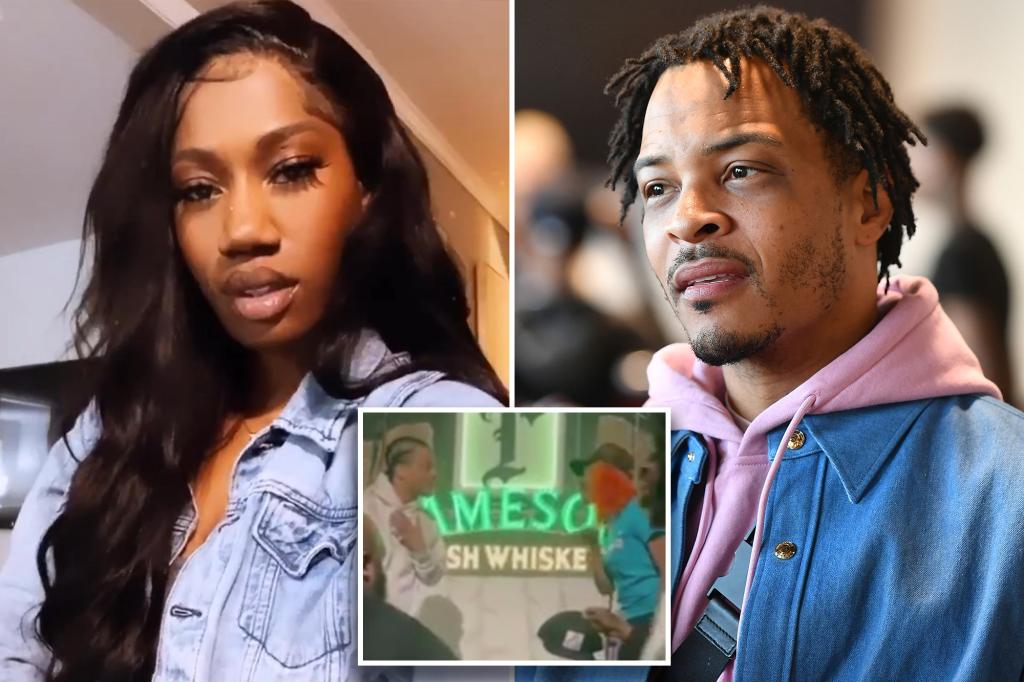 T.I. has confronted a comedian at an open mike night in Atlanta after she brought up sexual assault allegations leveled against him during her live stand-up set.

The 41-year-old rapper was in the audience at Our Bar ATL on Monday night when funny woman Lauren Knight referenced claims that T.I. and his wife, Tameka “Tiny” Harris, drugged and sexually assaulted a woman in 2005.

According to Knight, T.I. — whose real name is Clifford Harris — was heckling her during her comedy routine, repeatedly yelling out from the crowd and telling her to “take her wig off.”

That taunt prompted Knight to bring up the 2005 allegations (which did not go to trial due to the statute of limitations having run out).

“I said, ‘I’ll take my wig off when you speak on the allegations,’ ” Knight stated in a subsequent Instagram video addressing the incident.

Reference to “the allegations” caused T.I. to erupt, with the rapper storming the stage and verbally abusing Knight in front of the stunned audience. It was a startling turn of events so soon after Will Smith took to the stage and slapped Chris Rock at the Oscars on March 27.

Video of the moment — shared to the Baller Alert Instagram page — shows T.I. grabbing a microphone and telling Knight: “As many times as you joke on that s – – t n – – – -, I’m gonna check your mother f – – king ass as long as it takes.”

However, the video also shows Knight saying she doesn’t believe the sexual assault allegations, telling the crowd: “T.I. is innocent. I truly believe it. Give it up for him. There are no charges.”

In her subsequent Instagram video addressing the skirmish, Knight appeared to indicate that she had no hard feelings against the rapper.

“I made a joke, just like he did,” she told her followers in the clip.

Knight also stood by her controversial reference to T.I.’s lawsuit, writing in the caption: “Listen… you can’t be a heckler and get mad when you get a response. I stand on what I said. I love comedy. Make sure you got the whole story before you believe just anything.”

Last year, a woman filed a lawsuit against T.I. and his wife Tiny — real name Tameka Harris — claiming they drugged and sexually assaulted her in 2005.

However, the suit was thrown out just months later, due to the statute of limitations.

T.I. and Tiny’s attorney, Shawn Holley, told Page Six at the time: “Mr. and Mrs. Harris are pleased, but not surprised, by the District Attorney’s decision to dismiss these meritless allegations. We appreciate the DA’s careful review of the case and are grateful to be able to put the matter behind us and move on.”

Meanwhile, T.I. has been accused of — but never charged with — other crimes by more than 30 women.

In recent years, the women have accused the “Live Your Life” rapper of a litany of crimes, including drugging, kidnapping, rape and intimidation.

An incident, in which a woman claimed she was drugged and assaulted by T.I. in 2010, was similarly dismissed in Las Vegas last year because the statute of limitations had expired.

T.I. and Tiny have repeatedly denied “in the strongest possible terms these unsubstantiated and baseless allegations” and called the claims a “shakedown.”

The couple has been married since 2010 and raised seven children, including three of their own and others from their individual past relationships.