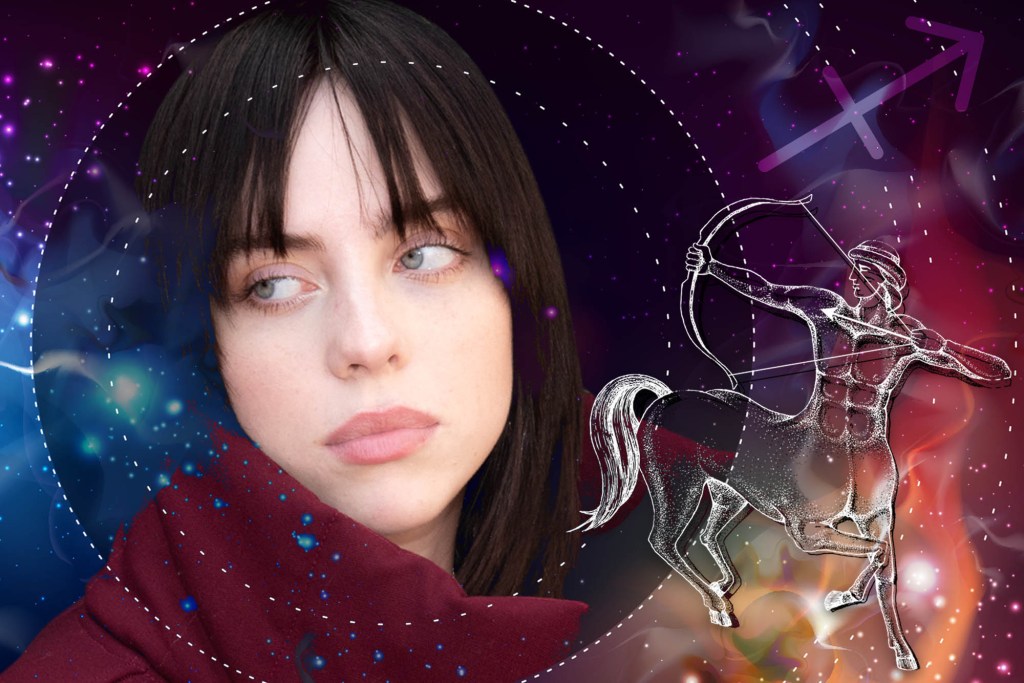 Happy return of the sun to the luminous Miss Billie Eilish. In her short sojourn on planet Earth, Billie has brought forth an original sound that isn’t entirely unlike listening to someone read their dream journal, out loud, underwater, on edibles. We love to hear it.

As our girl enters into the roaring wilderness of her 20s — and both hosts and performs on “Saturday Night Live” on Dec. 11 — let’s take a look at what her birth chart reveals about her public persona and private self.

Billie Eilish, born Dec. 18, 2001, has her Sun in idealistic, shoot-your-shot Fire sign Sagittarius. In astrology, the Sun represents the arch of our lives, the hero’s — or, in the case of Billie, shero’s — journey towards actualization. Sagittarius energy is momentous, optimistic and expansive. These folks seek strange shores and new horizons personally and professionally and their guiding philosophy is “Why not?”

Sagittarius is represented by the archer, a centaur who casts his arrows and ambitions skyward, a fitting metaphor for Eilish’s “recording music in my bedroom one day to owning the internet the next” career trajectory. Sagittarius rules the Ninth House of higher learning, and Eilish — who was homeschooled from the get-go — reportedly passed her high school equivalency exam at the tender age of 15, proving the road to greatness often begins on an unpaved path.

Sagittarians value freedom above all else and fear nothing more than being caged or controlled. Eilish’s response to this fear is found in her utter refusal to concede control of her music or image to anyone. While creative authority is essential to archers, they are broad-minded and make for natural collaborators, a fact made evident in Eilish’s ongoing musical partnership with her older brother, Finneas O’Connell.

Unflinching honesty is a hallmark of Sagittarians, and Eilish is no exception. She has been utterly, bravely open about her struggles with depression, suicidal ideation, anxiety and abuse. Eilish has distilled her struggles into song, including a recent exploration of power dynamics and exploitation in the track “Your Power.”

There is a certain moral authority among Sagittarius natives; they are unafraid to cast an arrow to the sky or a fist to the air. That energy compels them to take a stand and give voice to it, as Eilish did onstage in Texas, condemning the state’s near-total ban on abortion. Eilish has also used her celebrity status to advocate for animals. She agreed to rock a floor-length fairytale Oscar de la Renta gown to the 2021 Met Gala — if, and only if, the company stopped selling fur.

Fighting the good fight and looking like a dime piece while she does it.

If the sun is the self, the moon is the soul. In astrology, the moon relates to our needs and our style of fulfillment. It reveals what we require to feel safe and what we cannot live without, how we listen and what we respond. Because the moon is related to the divine feminine it also points to our relationship with our mother and/or maternal influence and the kind of nourishment we did or didn’t receive as children.

Billie has her moon in the alien cult leader Air sign of Aquarius. Aquarians are oddballs and madmen, geniuses and provocateurs. There’s a tendency among them to intellectualize emotion and their friend group closely resembles the island of misfit toys. Those with this moon feel secure only when they believe their freedom is guaranteed. They are deeply resistant to relying on others, as it leaves them vulnerable to desertion and the devastation that follows. Air moons prefer to process through logic rather than raw feeling, which gives them a sense of cool detachment and a nonjudgmental worldview. You cannot shock or alienate a moon in Aquarius native; their gift to the world is their radical acceptance and unflinching loyalty, a modality made evident in Billie’s public and musical homage to her friend, the late, controversial rapper XXXtentacion.

In relation to the mother archetype, Aquarius moon natives are usually raised in an unconventional household by a mother figure who valued independence and free thinking and actively defied traditional expectations or caretaking roles. Billie’s momma is actress, screenwriter and PETA award winner, Maggie Baird. In terms of literal nourishment, Baird is a vegan, a lifestyle choice she has passed on to her turkey-cradling, leather-loathing progeny.

Eilish’s moon is conjunct Neptune, the planet of dreams, intuition and compassion. This placement lends itself to heightened emotional sensitivity and, in the case of Eilish, a rare and powerful blurring of sensory perception known as synesthesia. Eilish credits the condition for inspiring her visually and musically, even paying homage to it with her self-titled fragrance. This conjunction points to a dissolved barrier between the native and the energy of others; they essentially operate as a raw nerve, feeling and absorbing. The challenge of this aspect is learning how to filter what is true and essential from what is abject hogwash and/or the slings and arrows of your lessers.

Billie has Mercury, planet of communication and expression in Capricorn. An Earth sign, Capricorn has a reputation for being financially responsible and they apply a similar frugality to language. More about impact than word count, what they lack in verbosity, they make up for in conviction. Case in point: fellow Mercury in Capricorn native Stephen Hawking. While Eilish’s frontiers are the human condition rather than the far reaches of the universe, she is nothing if not direct and efficient in her lyrics and personal proclamations. Eilish proves that pragmatism can be poetic as she dressed down a former suitor in her song, “Lost Cause,” telling the sad millennial sack: “I know you think you’re such an outlaw/But you got no job.”

Truth hurts — and Mercury in Capricorn knows just where to stick it.

Venus is the planet of love, possessions, aesthetics and attachments. Billie has Venus in free-wheeling Sagittarius. Those with this placement thrive on surprise. In love, they ask only that you be interesting, they want relationships to feel like an adventure in mind expansion and boundary-pushing. Hard pass on monotony and conventional gender roles, and an enthusiastic yes to sex outdoors, philosophical debates, impromptu road trips and flowers plucked from the cemetery passed along the way.

Billie’s been keeping it covert with her latest love interest, Matthew Tyler Vorce, but if that triple-named, problematic poster wants to hold on to her, he must come correct with direct desire and the spirit of spontaneity.

Billie’s Venus is conjunct Pluto, an aspect that lends itself to intense, often traumatic emotional experiences and the potential for serious romantic obsession. Case in point: Bille’s childhood fixation with Justin Bieber was so acute her mom considered putting her in therapy.

The relationship between Venus, which governs appearance, and Pluto, which rules death and transformation, points to the possibility of challenges with physical appearance and body confidence among those with this aspect. Billie has admitted her preference for oversized clothing stemmed from a fear of being body-shamed and confided in a Vanity Fair interview that her self-harm was related to the way she felt about her body.

Yet It seems our girl is stepping into her power, using her pain as a platform to challenge and change the status quo, as she did with her short film “Not My Responsibility,” Stripping down to a black bra, she offers a voiceover that questions toxic cultural narratives about the commodification of the female body. “If I wear what is comfortable, I am not a woman. If I shed the layers, I’m a slut. Though you’ve never seen my body, you still judge it and judge me for it. Why? We make assumptions about people based on their size. We decide who they are, we decide what they’re worth. If I wear more, if I wear less, who decides what that makes me? What that means? Is my value based only on your perception? Or is your opinion of me not my responsibility?”

Promoting self-love and radical acceptance while calling out the oppressive weight of the male gaze? All hail.

In astrology, Mars, named for the Roman god of war, represents our approach to sex, conflict and success. It indicates how and why we respond or react to people and provocation. Billie’s Mars is in the dreamy, pacifist, “never getting out of my pajamas” Water sign of Pisces.

Mars in Pisces doesn’t want to fight and it can’t help but feel. Rather than go to war, these folks would prefer to take a 9½-hour bath in order to rinse off the emotional detritus they pick up from others. Their high rate of absorption makes those with Mars in Pisces prone to depression. They need to retreat from the world in order to recover from it, a tactic Eilish alludes to in her song “NDA.”

Yet it is precisely this vulnerability that lends serious magnetism to Mars in Pisces natives. You feel like you’ll never really understand them, and I’ll be damned if that kind of mystery doesn’t make a legion of fans want to try.

Having the planet of action in the sign of inspiration indicates that momentous energy is applied to creative expression and the channeling of pain into production. Eilish, like fellow Mars in Pisces native Vincent Van Gogh, has shown she is not only capable but astrologically compelled to create. And, for that, we are all the better.

Happy birthday baby, we can’t wait to see the heights and depths you’ll take us to next.

Astrologer Reda Wigle researches and irreverently reports back on planetary configurations and their effect on each zodiac sign. Her horoscopes integrate history, poetry, pop culture and personal experience. She is also an accomplished writer who has profiled a variety of artists and performers, as well as extensively chronicled her experiences while traveling. Among the many intriguing topics she has tackled are cemetery etiquette, her love for dive bars, Cuban Airbnbs, a “girls guide” to strip clubs and the “weirdest” foods available abroad.