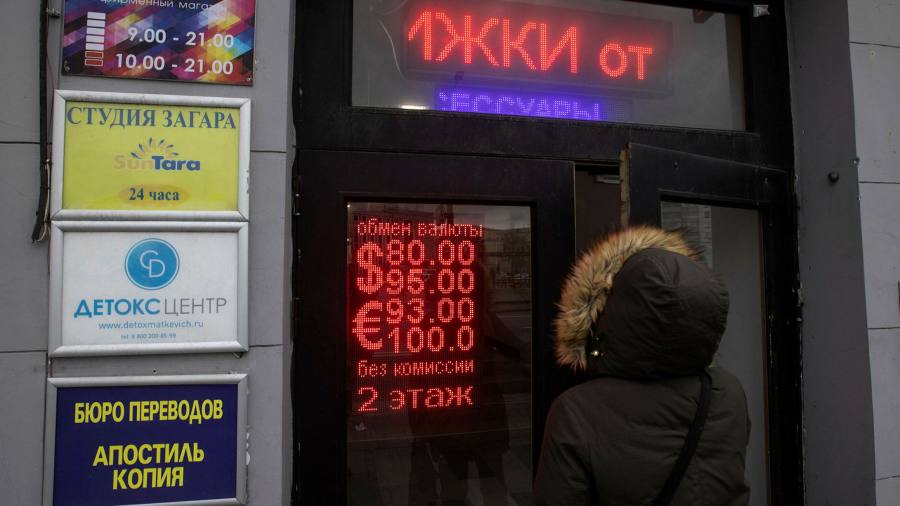 Russia’s stock market dropped at a record-breaking pace and the rouble plunged after Moscow launched a full-scale invasion of neighbouring Ukraine.

The Moex index briefly fell 45 per cent before recovering to a decline of 30 per cent in early European trading, while the rouble tumbled to a record low against the dollar after Vladimir Putin launched a “special military operation” to demilitarise and “de-Nazify” Ukraine.

Shares in oil and gas majors plummeted, with Gazprom down 33 per cent, and Lukoil and Novatek both about 30 per cent weaker, leaving the Moex down 42 per cent since the start of the year. The scale of the shock to markets suggests that investors had expected the Russian president to back down.

“You have the panic button being hit right now, I don’t think the market was pricing in the risk of a proper military conflict,” said Emmanuel Cau, head of European equity strategy at Barclays. “For the time being, it’s hard to see what could be a trigger for the market to stabilise.”

The Moscow exchange had earlier halted operations after the rouble fell to 89 to the dollar following reports of explosions in several Ukrainian cities. The Russian currency picked up slightly after the central bank said it would step in to stabilise the market.

“At this point in time, people are saying ‘get me out and get me out at any price’,” said Luis Saenz, head of international distribution at Sinara, a Russian investment company. “The vast majority of people are expecting the next round of sanctions to be impactful on their ability to invest in Russian stocks”.

Russian bond prices tumbled in strained trading conditions as markets reopened after Wednesday’s public holiday and markets reacted to fresh sanctions preventing US and EU investors from trading any new Russian debt issued from the start of March onwards. Dealers were pricing Russian 10-year bonds with yields as high as 15 per cent — up from less than 11 per cent on Tuesday — but huge gaps between buying and selling prices meant little actual trading was being done, investors said.

“Brokers are basically saying if you want to buy then we can give you a price, but if you’re selling, forget it,” said an analyst at a big asset manager. “The fear is Iranian-style sanctions where even if the Russians want to pay you back, there’s no way of getting the money to you.”

Some fund managers think this week’s new restrictions on Russian bonds could be a prelude to stricter curbs that ban them from buying or selling Russia’s existing debt. The cost of insuring Russian debt against default has more than doubled in two days with five-year credit default swaps trading at a spread of 740 basis points. In a sign of deepening concern some dealers have switched to a type of pricing often used in distressed credits.

Now that Russia has attacked Ukraine “the sanctions hit is going to be significant unlike the soft sanctions imposed on Tuesday and Wednesday”, said Charlie Robertson, chief economist at Renaissance Capital, referring to measures announced by the US, EU, and UK earlier this week.

Ukrainian bonds also extended their recent declines, with the price of a bond maturing in 2032 falling to 62 cents on the dollar, according to Refinitiv. Investors said some brokers were quoting much lower prices for Ukrainian debt. A “full-blown war” would likely cause Ukraine to default on its debt, Robertson said.