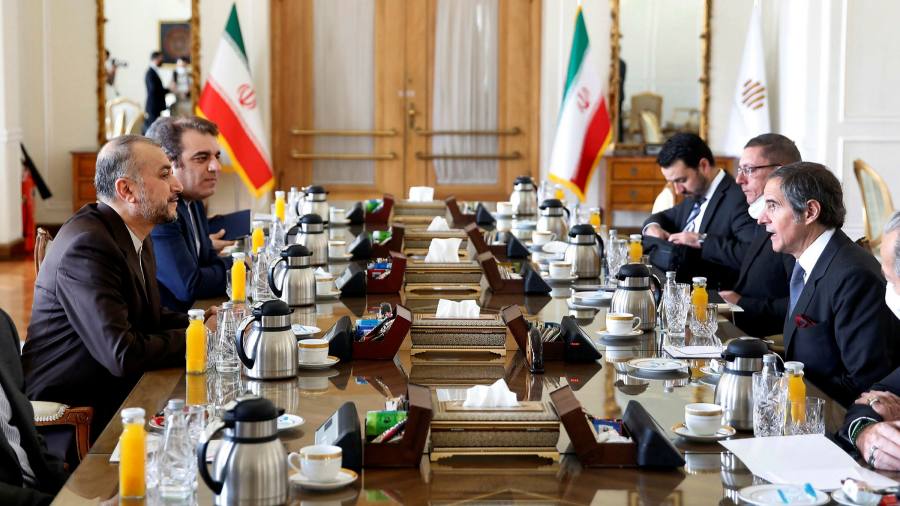 Russia is seeking written guarantees from Washington that US sanctions imposed on the country do not impede its ability to trade with Iran, a move that risks complicating efforts to revive the 2015 nuclear accord.

Moscow made the demand as western officials said they are close to a deal with Iran that would bring the US back into the agreement that Tehran signed with world powers. This would mean the Islamic republic limiting its nuclear activity in return for sanctions relief.

Russia, a signatory to the accord along with the UK, France, Germany and China, has been involved in the negotiations in Vienna aimed at saving the deal.

Sergei Lavrov, Russian foreign minister, told reporters on Saturday that Moscow wanted the US guarantees to ensure sanctions on Russia did not damage “our right to free and full trade, economic and investment co-operation and military-technical co-operation with the Islamic republic”.

“It would have all been fine, but the avalanche of aggressive sanctions that has erupted from the west . . . demand additional understanding,” he was quoted as saying by Interfax, the Russian news agency. “We need guarantees that these sanctions won’t affect the regime of trade-economic and investment ties embedded in the [nuclear deal].”

The US, EU and UK have imposed sweeping sanctions on Russia since its invasion of Ukraine, including those aimed at freezing the assets of President Vladimir Putin and Lavrov.

Iran transferred enriched uranium and heavy water to Russia after the 2015 nuclear accord was signed, and it would have to reduce its stockpiles again if a new deal was sealed.

Ali Vaez, an Iran expert at the Crisis Group think-tank, said Moscow’s demands were a “sign that the commingling of the two issues [the Russian invasion and the Iran talks] has started”. He added that the US could issue waivers for work related to the transfer of excess fissile material to Russia.

Iran has ramped up its nuclear activity since then US president Donald Trump’s decision in 2018 to unilaterally abandon the accord and impose crippling sanctions on the Islamic republic.

President Joe Biden’s administration has pledged to rejoin the deal and lift many sanctions if Tehran falls back into compliance with the original accord. It has been holding indirect talks with Iranian negotiators, mediated by the EU, in Vienna.

Western officials said this week they were close to securing a deal, but cautioned there were still outstanding issues that needed to be resolved.

Rafael Grossi, head of the International Atomic Energy Agency, discussed one of the points holding up the talks — a dispute over a stalled probe by the UN’s nuclear watchdog into traces of uranium found at old, undeclared sites — with Iranian officials in Tehran.

In a joint statement, Grossi and Mohammad Eslami, the head of Iran’s atomic agency, said Tehran would provide the UN nuclear watchdog “written explanations, including related supporting documents to the questions raised by the IAEA” by March 20.

Grossi would then report his conclusion by June, the statement said.

They added that they had agreed to “accelerate and strengthen their co-operation and dialogue aimed at the resolution of the issues”.

Grossi cautioned before his trip to Tehran that “people cannot foresee a return” to the nuclear accord if there were unresolved issues with the IAEA.

Other key sticking points include Tehran’s demands that the Biden administration provides guarantees that no future US president can again unilaterally abandon the deal.

Diplomats and analysts said it was virtually impossible for Biden to offer the guarantees that Tehran is seeking, but negotiators have been working on some form of assurances. There is also disagreement over which US sanctions would be lifted if Iran agreed to limits on its nuclear activity.

Trump imposed sanctions on dozens of senior Iranian officials, including President Ebrahim Raisi before he came to power last year, and the office of Ayatollah Ali Khamenei, the supreme leader. He also designated the elite Revolutionary Guard a terrorist organisation.