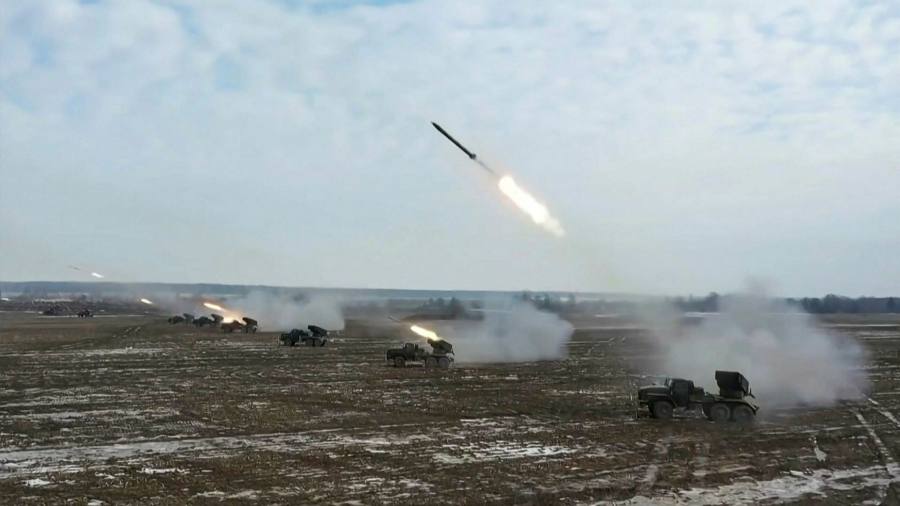 Russia will start nuclear exercises to test its ballistic and cruise missiles on Saturday as western powers continue to warn that the Kremlin is mobilising for an imminent invasion of Ukraine.

Russia’s defence ministry said on Friday that units from its air force, army and navy would take part in the drills, which would test its launch crews and personnel as well as its nuclear and conventional weaponry.

President Vladimir Putin will personally supervise the drills, which are likely to heighten tensions between Russia and the west over the already fraught situation in Ukraine.

The announcement came as the US disclosed revised estimates of Russia’s armed presence near Ukraine, suggesting personnel numbers had increased by more than two-thirds since the end of January to between 169,000 and 190,000.

Michael Carpenter, US ambassador to the Organization for Security and Co-operation in Europe, described it as “the most significant military mobilisation” on the continent since the second world war.

The timing of the nuclear drills, which US officials had interpreted as a show of strength by Moscow to Nato, will further add to the sense of foreboding in western capitals over Russia’s intentions in Ukraine.

António Guterres, UN secretary-general, said on Friday he was “deeply concerned” about the concentration of Russian forces and the risk of a military conflict in Ukraine. “I still think it will not happen. But if it did, it would be catastrophic,” he told the Munich Security Conference. “It’s high time to de-escalate.”

Although the Kremlin said the annual nuclear exercises — which were not held in 2020 or 2021 because of the pandemic — were long planned, the last time the exercises were moved to February from their usual autumn timeframe was shortly before Russia invaded Crimea in 2014.

Dmitry Peskov, Putin’s spokesperson, told reporters the exercises were regular and should not “give anyone cause for questions and concern”.

Russia has the largest nuclear forces in the world, with just under 4,500 warheads in its stockpile. The nuclear drills follow its massive military exercises in Belarus, which are set to end on Sunday.

Putin said on Tuesday that Russia had begun pulling back its forces from the Ukrainian border, but western countries have accused Moscow of publishing videos of tanks and artillery supposedly heading back to base as a smokescreen for further troop deployments.

US president Joe Biden warned on Thursday that Russia was on the brink of invading Ukraine within “several days”, saying Washington believed the Kremlin was engaged in “a false flag operation to have an excuse to go in”. Ukraine’s defence minister Oleksii Reznikov told parliament on Friday that the probability of a major escalation was “low”.

On the same day as unveiling plans for its nuclear drills, Moscow said it would engage in fresh talks with western powers in a bid to resolve the Ukraine crisis through a security agreement.

Peskov said there would be “certain contacts on the working diplomatic level between foreign ministers” with the US next week after Russia’s foreign ministry sent a reply to the US state department on Moscow’s draft security proposals on Thursday.

In response to the letter, Antony Blinken, US secretary of state, had invited his Russian counterpart Sergei Lavrov to meet in Europe next week to discuss a possible high-level summit that would resolve “mutual security concerns”.

“Let’s see, right now it’s part of the negotiating process. But this idea should keep on going,” Peskov said. Russia’s ambassador to the UK said the meeting could be held in Geneva or Finland, according to Interfax.

The Russian letter expressed Moscow’s openness to talks on issues such as arms control and deconfliction measures, but insisted it would only do so as part of a broader discussion of its core security grievances with Nato.

Russia has also rejected calls to draw down its troops at the Ukrainian border and insisted it had no plans to invade.

Annalena Baerbock, Germany’s foreign minister, expressed regret that Russia was not sending any representatives to the Munich Security Conference, an annual gathering of politicians, military chiefs and diplomats that kicked off on Friday.

“Precisely in the current, extremely dangerous situation, it would have been so important to meet Russian representatives in Munich,” she said in a statement. “It’s a loss that Russia isn’t exploiting this opportunity.”

Ukraine and Russia-backed separatists controlling breakaway eastern regions of the country continued on Friday to accuse each other of shelling each other’s positions and civilian neighbourhoods after a Thursday flare-up in fighting.

Reznikov said 60 ceasefire violations were recorded in the previous 24 hours, including 43 artillery salvos, but insisted Ukraine would “remain cool headed”.