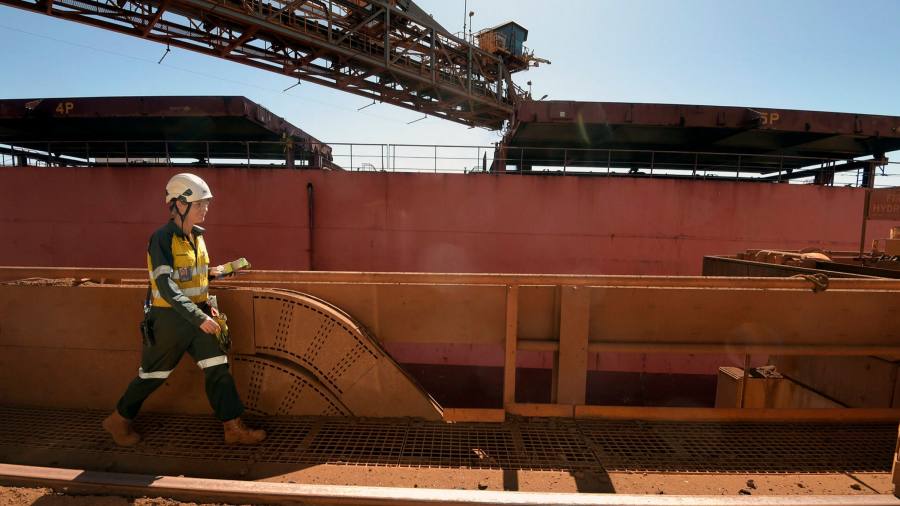 Rio Tinto has signalled an end to the era of record returns in the mining sector, as the Anglo-Australian group reported a sharp drop in half-year profit and more than halved its dividend payment.

This time a year ago, the world’s biggest producers of raw materials were basking in the glow of soaring metal prices as lockdown restrictions eased and demand picked up.

But the industry is now facing a vicious margin squeeze as fears of a demand-sapping recession drive commodity prices lower while the cost of everything from diesel to explosives soars.

At the same time, a deepening crisis in the property sector is raising concerns about demand from top commodity consumer China.

Rio, the world’s largest producer of steelmaking ingredient iron ore, reported underlying earnings of $8.6bn for the six months to June, down from a record $12.2bn last year, on sales of almost $30bn.

The company, which is the first of the big miners to report results, said it would pay a dividend of $4.3bn, or 50 per cent of underlying earnings.

While that is still the second-highest half-year payout on record and in line with its dividend policy, the dividend is significantly lower than last year’s payment of $9.1bn and below what analysts had expected.

Dominic O’Kane, analyst at JPMorgan, said the decision to pay out 50 per cent of earnings, against market expectations of 65-70 per cent, would be a big focus for investors.

“With $300mn of net cash at the end of June, the 50 per cent payout . . . is likely to be regarded as a disappointment and is likely to provoke questions on whether Rio is seeking to retain balance sheet flexibility for mergers and acquisitions, which is a comment we have heard from other global mining peers.”

Rio chief executive Jakob Stausholm defended the payout of 276 cents per share, explaining that this time a year ago, the price of iron ore “was more than twice as high as it is today”.

“You also have to look at the absolute number — $4.3bn is a staggering amount,” he said. “We are very proud of what we are paying out.”

Asked whether he was keeping “powder dry” for possible deals, Stausholm said that going into a period in which there could be “some headwinds on international markets”, it was not a bad thing to have a “strong balance sheet.”

“Basically it gives us more optionality,” he said.

Rio is looking to increase its exposure to metals that are critical for the green energy transition. To that end, it agreed to buy a lithium mine in Argentina last year for $825mn and is seeking to buy out the shares it does not already own in Turquoise Hill Resources, which controls the huge Oyu Tolgoi copper mine in Mongolia.

Asked about rising costs, chief financial officer Peter Cunningham told reporters there were “hotspots” that Rio was having to manage “very actively”.

“If you look at the diesel price it is roughly double what it was in 2021,” he said. “Otherwise I’d say the major effects are just the broad level of inflation in the economy in which we operate is flowing through.

The biggest factor in Rio’s lower profits for the six months to June was a weaker performance from its iron ore unit, where underlying earnings dropped 37 per cent to $6.5bn.

Prices for benchmark ore with 62 per cent iron content dipped below $100 a tonne this month, although they have recovered to $111, according to an assessment from Platts. This time a year ago, iron ore was trading above $200 a tonne.