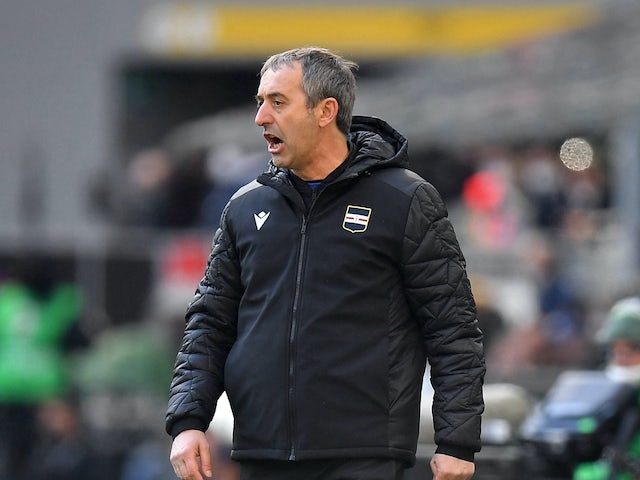 Despite a recent downturn in form, Empoli are separated from Saturday’s opponents Sampdoria by eight points and five places in the Serie A standings, as the pair meet at Marassi this weekend.

Samp trail their counterparts in the table following a turgid campaign, which saw old coach Marco Giampaolo recently return, while the Serie B champions made a flying start to the season but are now on a run of nine games without a win.

Though the reappointment of former favourite Marco Giampaolo as Sampdoria manager brought about the Blucerchiati’s only win since mid-December, they have now lost five of their six Serie A games played in 2022.

Picking up just three points throughout that period – and only Bologna have accumulated fewer – they have been unable to pull away from the danger of demotion, and sit 16th in the standings; two points above 18th-placed Venezia having played one game more.

Having previously stunned Sassuolo 4-0 at Stadio Luigi Ferraris, the Ligurians travelled to San Siro last Sunday to face Milan, and returned home pointless after a 1-0 defeat which would have been by a far greater margin had the new league leaders taken their chances.

Giampaolo next leads his side out against a side in similarly troubling form, and Samp should have fond memories of the clubs’ clash back in September, when they ran out 3-0 winners at Empoli’s Tuscan headquarters.

In all, they have gone unbeaten in 10 of their last 11 Serie A encounters with the Azzurri, but have curiously failed to win any of their three most recent home games against them in the top flight.

Even if they have managed to avoid defeat away to Sampdoria in recent times, Empoli have still been unable to take maximum points in seven of their last eight league matches at Marassi – versus either Genoa or this week’s opponents.

Indeed, in three of their last five visits to the Ligurian capital they have failed to even score, so the Tuscan club will certainly not be returning to a happy hunting ground on Saturday.

Coach Andrea Andreazzoli will be desperate for his side to confound recent precedent there, though, as they have slid into the bottom of the table following a declining points return of late.

A paltry tally of five from their last eight Serie A outings – in addition to elimination from the Coppa Italia at the last 16 stage – sees the ailing Azzurri in 11th spot before this weekend’s action, yet still some 10 points clear of danger.

Often an entertaining watch, Empoli may have set a new club record for goals scored at this stage of a Serie A season (38 from 25 matches) but they have conceded 48 times in the process – also their highest total at this point in a top flight campaign.

Following last week’s 1-1 home draw with lowly Cagliari, they return to the road having drawn each of their last four away games in the league. No doubt, Andreazzoli will hope to further improve one of the division’s better records this term – with his side suffering just two defeats from 12 away trips to date.

While both Kristoffer Askildsen and recent signing Sebastian Giovinco undertook individual training during the week, both are hopeful of being involved in the Sampdoria squad on Saturday. However, Japan captain Maya Yoshida and Danish winger Mikkel Damsgaard are both still out of action.

Having fielded a 4-4-1-1 setup for his return to San Siro, coach Marco Giampaolo may opt for a more attacking approach this time out, so veteran forward Fabio Quagliarella is a contender to return to the starting XI.

Supporting the front line from out wide will be Antonio Candreva, who has previously struck four times in seven Serie A matches against Empoli, and also scored in stoppage time at the end of Samp’s last home game. Meanwhile, following a strong showing in Milan, Wladimiro Falcone is set to continue in goal.

The visitors could give a first start to a familiar face for the home side, as on-loan midfielder Valerio Verre is vying with Liam Henderson and Albanian playmaker Nedim Bajrami to feature in support of Andrea Pinamonti up front.

On a season-long loan from Inter, nine-goal Pinamonti could become just the ninth Empoli player to reach double figures in a Serie A season.

At the back, meanwhile, Sebastiano Luperto should return from a muscular injury in time to travel, but is most likely to start on the bench.

Even amid some failing form, Empoli are a tough nut to crack away from home, and were within minutes of ending their winless run last weekend.

So with neither team particularly potent of late – Samp’s freak victory over Sassuolo aside – this clash is all set for a low-scoring draw.

Our expert tipster partners at Sporita.com are predicting over 2.5 goals in this match. Click here to find out what else they are predicting for this game and for more of their tried-and-tested football tips.Over 2.5:data
ID:478313:1false2false3false:QQ:: from db desktop :LenBod:collect11972: