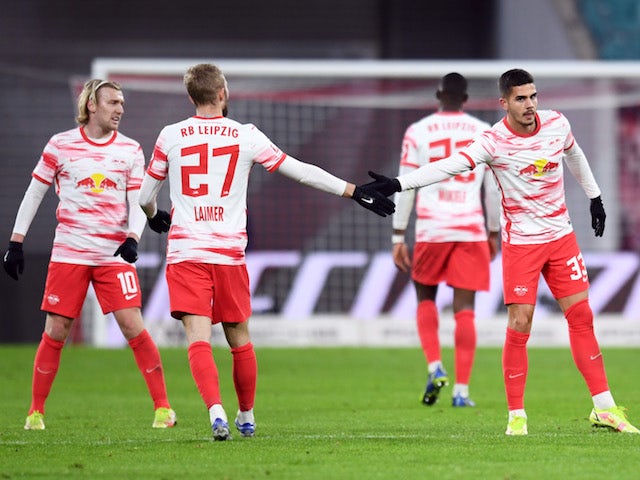 Hansa Rostock will face top tier opposition in the last 16 of the DFB-Pokal, when they come up against RB Leipzig on Wednesday.

Die Roten Bullen have finished runners-up in two of the last three seasons of the domestic cup competition, while Hansa Rostock are participating in the round of 16 for the first time since the 2008-09 season.

RB Leipzig are a rejuvenated outfit under Domenico Tedesco, who took over the reins from Jesse Marsch in December.

Tedesco has lost just one of his first five games in charge of Die Roten Bullen, and they enter Wednesday’s tie off the back of consecutive victories.

After thrashing Mainz 4-1 in their first outing of 2022, Leipzig claimed their first clean sheet under their new boss on Saturday.

They travelled to Stuttgart at the weekend and took the lead after only 11 minutes courtesy of an Andre Silva spot-kick before Christopher Nkunku struck in the second half to wrap up the three points.

Die Roten Bullen will now turn their attention to Wednesday’s encounter, and if Leipzig can progress they will begin to dream of a first-ever DFB-Pokal title.

They may be struggling in the 2.Bundesliga, but Hansa Rostock will be fully focused on causing a cup upset on Wednesday.

Sitting three points above the relegation play off spot, Jens Hartel side may be relieved to have a momentary distraction from their relegation battle.

Winless in their last six competitive fixtures, Hansa Rostock face an uphill task to progress to the quarter-final stage of the DFB-Pokal for the first time since the 2004-05 edition of the competition.

They have experienced a dramatic run to the last 16, winning their first-round tie in the 119th-minute of extra time before requiring a 121st-minute equaliser to send their second-round encounter with Jahn Regensburg to penalties.

They prevailed 4-2 in the shootout to set up a meeting with Leipzig, but having conceded eight goals in their last three away matches, the visitors may be slightly fearful of the attacking talent available to their hosts.

Dominik Szoboszlai suffered a muscle injury in the warm-up before Saturday’s encounter with Stuttgart, and the Hungary international is expected to miss the cup tie.

Ilaix Moriba and Amadou Haidara are currently representing their respective countries at the Africa Cup of Nations, while Emil Forsberg and Marcel Halstenberg are ruled out due to injury issues.

Positively, Nordi Mukiele and Konrad Laimer have returned to training, and they could be included in the matchday squad on Wednesday.

As for the visitors, Lukas Scherff and Maurice Litka are both absent due to anterior cruciate ligament injuries, while an ankle problem will rule Nik Omladic out of the tie.

Despite losing at the weekend, Hartel is expected to keep changes to a minimum, although Streli Mamba could come into the starting lineup.

John Verhoek has scored 10 league goals for Hansa Rostock this term, and he will lead the line for the visitors in Leizpig.

This will be the first meeting between the two sides since a 3.Liga clash in 2014, but on this occasion Hansa Rostock will come up against a Leipzig side stacked with talent, and we think the hosts will made light work of their second tier opponents on Wednesday.

Our expert tipster partners at Sporita.com are predicting over 2.5 goals in this match. Click here to find out what else they are predicting for this game and for more of their tried-and-tested football tips.Over 2.5:data
ID:475600:1false2false3false:QQ:: from db desktop :LenBod:collect10392: