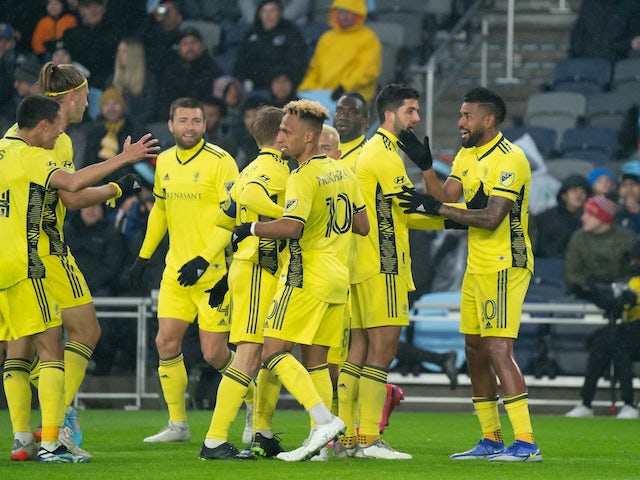 Nashville SC can extend their unbeaten run at home to an incredible 25 games in all competitions when they welcome the San Jose Earthquakes to GEODIS Park on Saturday.

The Boys in Gold have won their last three Major League Soccer affairs and are currently sixth in the Western Conference, while San Jose had a four-match unbeaten run snapped before the international break when they lost 3-2 to Los Angeles FC.

The early regular season schedule for Nashville was not an easy one as they had to play their first eight matches away from home before the opening of GEODIS Park.

They came out of that in relatively good shape however, earning 11 out of a possible 24 points to remain in contention for the playoffs.

Gary Smith has seen his team take off lately, without a defeat in their last four matches in all competitions and positioned to earn another postseason berth.

In their previous fixture, they came out full of energy and determination, taking a 3-0 lead against the Colorado Rapids after 17 minutes of play and cruising to a comfortable 3-1 victory, ending The Burgundy Boys’ 23 match home unbeaten run in the process.

Nashville are among the best teams in the league at limiting quality shooting chances, and even though they allow their fair share of entries into their own penalty area, they are quick to close down that space, blocking numerous shots.

So far in 2022, The Boys in Gold have looked sharp from open play, while they are starting to get their dangerous attacking players more touches, which has made a massive difference in their results.

If there is an area that needs improvement, it would be how they defend set-pieces, which continues to plague them as they allow far too many chances in all three phases of the field in dead ball situations.

A new coach has made a big difference in Silicon Valley, though San Jose still find themselves near the bottom of the Western Conference standings with 14 points.

Since Alex Covelo took over from Matias Almeyda, The Quakes have earned points in five of their last seven league fixtures, with six of those encounters being decided by a goal or fewer.

While they are giving themselves a chance to collect points, they have yet to solve their problems at the back, conceding 15 times domestically under Covelo and leading the league when it comes to goals against (32).

San Jose have indeed proven to be a quality side in the attacking third, scoring the third-most goals in the league thus far (25), and it is that kind of pinpoint accuracy in front of goal which has kept their matches close, as The Goonies have conceded first in their last four MLS affairs.

This year, the Quakes are one of only five teams in the league who have not won a match away from home, losing three road fixtures by a single goal.

As appealing as their aggressive and seemingly relentless press may be at times, it has gotten this team in a lot of hot water, costing The Goonies several points which could have them higher up the table.

They are currently four points back of the final playoff spot in the Western Conference, so even though their season has not gone smoothly there is not that much ground to make up.

Nashville have managed to get Hany Mukhtar more touches in recent contests, which has improved their results, with the German notching his second brace of the campaign in their previous match, as he has four goals in his last three games, while his teammate CJ Sapong has scored once in each of his previous two encounters.

Elliot Panicco made his debut in goal for The Boys in Gold at Colorado, stopping four shots, while Luke Haakenson earned his second career assist in that fixture.

Daniel Lovitz picked up cap number 185 in MLS play in their last match, and Dax McCarty made his 421st career regular-season appearance.

Teal Bunbury remains out with a right knee problem, Robert Castellanos continues to recover from right ankle surgery and Randall Leal has an ankle injury.

Jeremy Ebobisse scored twice in a losing effort for San Jose versus The Black and Gold, as he is tied with Jesus Ferreira in the Golden Boot race with nine tallies to date, while Cristian Espinoza has seven assists this season and 37 in his career, currently only three back of Chris Wondolowski for the fourth-most in club history.

Over the international window, The Quakes made a move, signing promising youngster Cruz Medina as a homegrown player until 2026, with an option for 2027.

JT Marcinkowski wore the captain’s armband for the first time in his MLS career when they faced LAFC, and Jamiro Monteiro has assisted in five of The Quakes’ last seven matches played, tallying three goals.

The best players for Nashville are in fine form right now, and while San Jose have a pretty lethal striker themselves, they have not fixed their defensive issues, and we anticipate Mukhtar and company will prevail because of their depth in the attacking third, along with their home fans, who always seem to provide them with that extra boost.

Our expert tipster partners at Sporita.com are predicting under 3.5 goals in this match. Click here to find out what else they are predicting for this game and for more of their tried-and-tested football tips.Under 3.5:data
ID:487660:1false2false3false:QQ:: from db desktop :LenBod:collect14469: