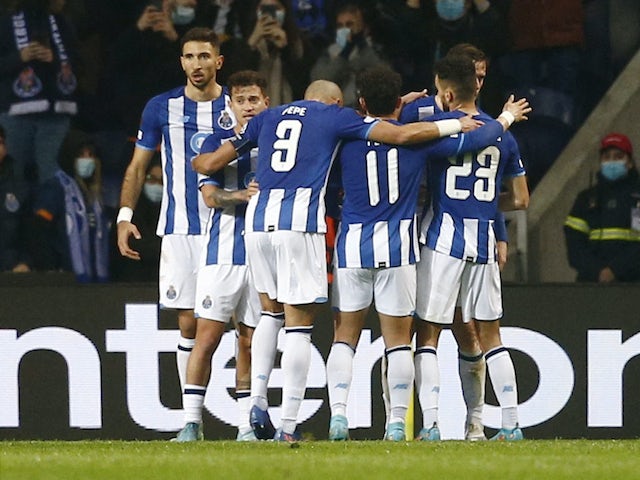 Off the back of an Europa League victory over Italian outfit Lazio, Porto resume their charge for the Primeira Liga title as they visit the Parque de Jogos Comendador Joaquim de Almeida Freitas to face Moreirense on Sunday.

The visitors, on the other hand, were on the receiving end of a 5-0 thrashing at the hands of Famalicao last time out and will be looking to quickly bounce back from that result.

Moreirense were sent crashing back down to earth in the Primeira Liga when they were thrashed 5-0 by fellow strugglers Famalicao at the Estadio Municipal de Famalicao last Sunday.

Pepe, Simon Banza, Adrian Marin and Joao Carlos Teixeira all scored to hand the hosts a commanding four-goal lead heading into the half-time break before Ivan Dolcek put the icing on the cake with his 69th-minute strike.

This followed a 4-1 victory over 10-man Belenenses when the sides met at the Parque de Jogos Comendador Joaquim de Almeida Freitas on February 7 which saw their three-game winless run come to an end.

With 19 points from 22 games, Os verdes e brancos are currently 16th in the Primeira Liga standings, four points above rock-bottom Belenenses and one below Tondela just outside the relegation zone.

Their poor performances this season has been owing to their struggles on the road where they have managed just one win from 12 games and currently boast the division’s fourth-worst record with seven points from 12 so far.

While Moreirense will look to bounce back from their defeat against the Vila Nova, next up is an opposing side who are unbeaten in each of the last 11 meetings between the sides since 2017, claiming eight wins and three draws in that time.

Meanwhile, Porto kicked off their Europa League campaign on winning note as they came from behind see off Lazio 2-1 on home turf last time out.

In a thrilling contest at the Estadio do Dragao, Mattia Zaccagni put the Italian side ahead in the 23rd minute, but Toni Martinez came up trunks for the Dragoes as he struck twice to turn the game on its head.

They now turn their sights to the Primeira Liga where they saw their 11-game winning streak come to an end courtesy of a 2-2 draw with rivals and defending champions Sporting Lisbon last February.

Porto head into the weekend unbeaten in each of their last 13 games across all competitions, claiming 12 wins and one draw since December’s 3-1 loss against Atletico Madrid in Group B of the Champions League.

With 60 points from 22 games, Sergio Conceicao‘s men, who are the only unbeaten side in the Primeira Liga this season, are currently top of the league table with a healthy six-point lead over second-place Sporting Lisbon.

Porto will take to the pitch without the services of Wilson Manafa, who has been out of action since sustaining a leg injury in the game against Benfica on December 31.

Martinez put on a clinic in the game against Lazio last time out and the 24-year-old forward could be rewarded with his fifth league start of the season.

Meanwhile, barring any late fitness issues, Moreirense head into Sunday’s game with a clean bill of health and no suspension concerns, giving Sa Pinto the luxury of a full strength squad at his disposal.

Despite their defeat against Famalicao last time out, Andre Luis was a bright spark for Os verdes e brancos and we expect the Brazilian forward to lead the attack once again.

Porto head into Sunday’s game as one of the most in-form sides in the Primeira Liga and will fancy their chances against an opposing side who they are unbeaten against since 2017. Looking at the gulf in quality and experience between the two teams, we are tipping the visitors to ease to all three points on Sunday.

Our expert tipster partners at Sporita.com are predicting over 2.5 goals in this match. Click here to find out what else they are predicting for this game and for more of their tried-and-tested football tips.Over 2.5:data
ID:478556:1false2false3false:QQ:: from db desktop :LenBod:collect10054: