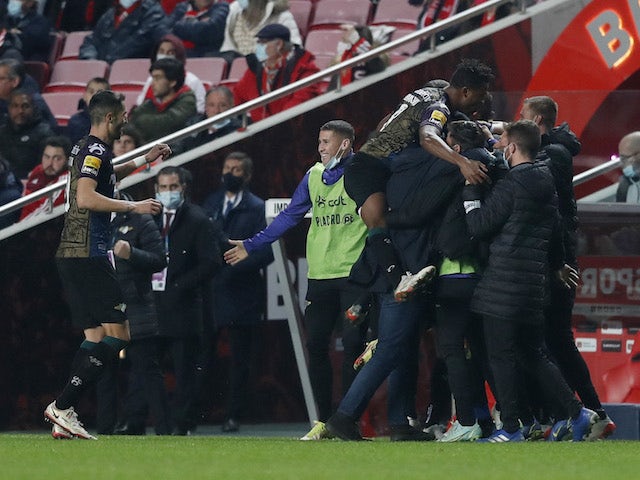 Moreirense will be looking to snap their four-game winless run and move out of the relegation places when they welcome Maritimo to the Parque de Jogos Comendador Joaquim de Almeida Freitas on Sunday.

O Maior das Ilhas, on the other hand, will head into the game seeking to get one over the hosts after failing to win any of the last four meetings between the sides since 2019.

Moreirense failed to steer clear of the relegation places last weekend as they settled for a 1-1 draw at Arouca after bottling their one-goal lead in the final 11 minutes of the game.
​
In a game where Fabio Pacheco received his marching orders, Bruno Marques restored parity in the 79th minute following Yan Santos‘s 44th-minute opener before Victor Braga stood tall to deny Ibrahima Camara the winner from the penalty spot five minutes later.
​
Moreirense have now failed to win any of their most recent three games — losing two and claiming one draw in that time — while managing just one win from their last seven outings.
​
With 20 points from 24 games, Ricardo Sa Pinto‘s men are currently 17th in the Primeira Liga standings, level on points with Tondela in the relegation playoff spot and two points off 15th-placed Arouca just outside the drop zone.
​
However, Os verdes e brancos will feel confident of ending this dry spell and rising out of the relegation places as they go up against an opposing side who they are unbeaten against in each of the last four meetings between the teams since 2019, claiming three wins and one draw in that time.
​

On the other hand, Vasco Seabra will be impressed with his side’s performance last time out as Maritimo held reigning champions Sporting Lisbon to a 1-1 draw on home turf.
​
Despite seeing just 32% of the ball possession at the Estadio do Maritimo, Bruno Xadas put the hosts ahead in the opening five minutes before Islam Slimani struck in 38th minute to force a share of the spoils.
​
Maritimo head into Sunday’s game winless in all but one of their last six outings — claiming three draws and losing two in that time — with a 3-0 victory over Arouca on February 14 being the only exception.
​
However, O Maior das Ilhas will take pride in their recent form on enemy territory as they have picked up three wins from four away games, scoring seven goals and keeping two clean sheets in that time.
​
Maritimo have won seven, drawn eight and lost nine of their 24 games this season to collect 29 points and sit ninth in the league standings, level on points with eighth-placed Portimonense.
​
Moreirense follow Sunday’s game with a mouth-watering home clash against Sporting Lisbon, while the Maritimo return home to face Vitoria de Guimaraes on next Sunday.

Moreirense will be without the services of veteran midfielder Pacheco, who is currently suspended after receiving his marching orders against Arouca last time out.

On the injury front, the duo of Walterson Silva and Guinea-Bissau international Sori Mane will play no part in Sunday’s game as they continue their spells on the sidelines through injury.

Maritimo, on the other hand, head into the game with a clean bill of health and no suspension concerns, giving Seabra the luxury of a full-strength squad at his disposal.

On the back of his side’s solid display against Sporting Lisbon last weekend, the 38-year-old manager could name a similar side on Sunday, meaning we could see a centre-back pairing of Matheus Costa and skipper Zainadine Junior shielding Paulo Victor in gaol.

Further up the pitch, Ali Alipour is currently the club’s top scorer in the league with six goals so far, and we expect the 26-year-old forward to spearhead the attack once again.

Despite failing to came away with all three points, Maritimo will feel feel delighted with their performance against the reigning champions last time out as they held on for an impressive draw. While they head into the game in similar form with Moreirense, we are backing Seabra’s men to build on last week’s performance and come away with a slender win on Sunday and end their winless run in this fixture.

Our expert tipster partners at Sporita.com are predicting over 1.5 goals in this match. Click here to find out what else they are predicting for this game and for more of their tried-and-tested football tips.Over 1.5:data
ID:479899:1false2false3false:QQ:: from db desktop :LenBod:collect10672: