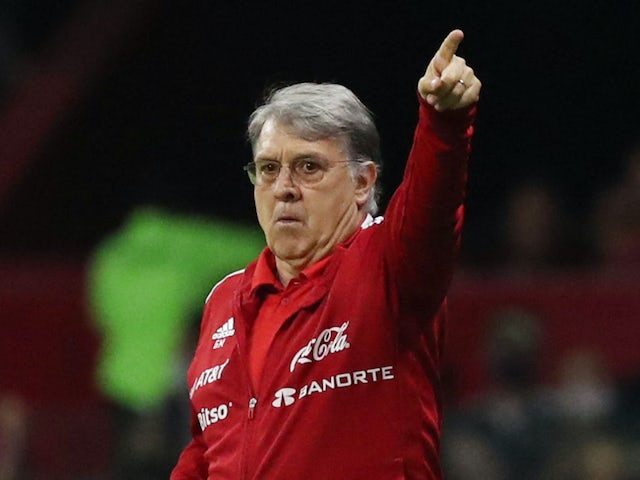 Following a devastating end to their World Cup qualification campaign in June, Peru begin life under new management when they travel to the Rose Bowl in Pasadena, California, for an international friendly versus Mexico on Saturday.

Since booking their place in the finals earlier this year with a 2-0 triumph over El Salvador, El Tri have just two wins in their last seven matches in all competitions, while the Peruvians failed to qualify for Qatar, losing 5-4 on penalties against Australia in a match which ended 0-0 after 120 minutes.

As they prepare to make their eighth successive trip to the World Cup, there may be more scrutiny surrounding this current Mexican squad than ever before.

Gerardo Martino‘s men rarely had much rhythm to their game in their 14 qualifying matches in the Octagon, scoring a goal or fewer in nine of those encounters.

As the ninth-ranked team per the FIFA World rankings, the Mexicans will be expected to make it beyond the opening phase of this World Cup once again in a group which features Argentina, Saudi Arabia and Poland.

Over the summer months, this team struggled to find quality in the attacking third, winning only one of their previous five matches in all competitions and failing to tally on three occasions.

The Mexicans have not faced the Peruvians since 2015, capturing only one of their previous five encounters against them, netting a goal or fewer in four of those matches.

Scoring the opening goal has proven to be a pivotal part of their success, as Mexico have not lost when drawing first blood since falling 3-2 in extra-time against the USA at the CONCACAF Nations League final last year.

A second successive trip to the World Cup was not on the cards for Los Incas this time around, as they failed to maintain their composure against the tactical mind games played by Socceroos reserve goalkeeper Andrew Redmayne in the penalty shootout.

Looking back at their campaign, Peru missed a pair of opportunities to qualify directly for the finals out of South America, squandering a 2-1 lead against Brazil on matchday two, eventually losing 4-2, and then failing to hold onto a first-half lead at home to Uruguay on matchday nine, drawing 1-1.

Those five points dropped wound up being the difference between an inter-confederation playoff and direct passage into the finals, as they finished two points behind Ecuador for fourth.

The Peruvian Federation have put the future of the national team in the hands of Juan Reynoso, who, as a player, captained this team to a semi-final appearance at the 2000 CONCACAF Gold Cup.

Reynoso will be very familiar with the Mexican game, having managed three sides in Liga MX, leading Cruz Azul to the Guardianes league title in 2021, their first in 24 years, becoming the first foreign-born coach to achieve that feat.

He inherits a team that have been sharp along the back end throughout 2022, conceding a goal or fewer in their eight matches played this year.

Raul Jimenez, who led Mexico with three goals in qualifying, needs three more appearances to reach 100 for the national team, Guillermo Ochoa can draw even with Jorge Campos for fifth in all-time appearances, currently one behind the former Mexican keeper (129), while Andres Guardado is two caps away from equalling the all-time national team record of 177 set by Claudio Suarez.

Hirving Lozano continues to search for his first goal in Serie A this season after tallying five domestically for his club side Napoli in 2021-22, Henry Martin is second in Liga MX scoring with 10 goals, Kevin Alvarez is tied for second in the league for assists with five and Santiago Gimenez has two goals in five Eredivisie appearances with Feyenoord.

Rogelio Funes Mori has not appeared for the senior side since starting alongside Lozano and Jesus Manuel Corona in late January, when they drew 0-0 versus Costa Rica in World Cup qualifying.

He and Orbelin Pineda were the joint top-scorers for El Tri at the 2021 Gold Cup, while Hector Herrera was named that tournament’s best player.

Peruvian captain and goalkeeper Pedro Gallese has not conceded in his last three matches in all competitions, while Luis Advincula and Alex Valera both missed from the penalty spot against Australia, ultimately costing them a place in the World Cup.

Advincula has a chance to draw even with Paolo Guerrero for third in international caps as the country’s record goalscorer was not selected for this match, while Raul Ruidiaz, who leads the Seattle Sounders with nine tallies domestically, has not scored an international goal since March 2018.

Bryan Reyna and Piero Quispe, who play their club football domestically in Peru at Academia Cantolao and Universitario respectively, are looking to make their first appearances for the national team.

Christian Cueva is eight caps away from 100 in his international career, and Nilson Loyola needs to make two more appearances for Peru to reach double digits.

We believe that Mexico have a lot more quality than the Peruvians on paper, but the Gold Cup runners-up have lacked consistency and quality in the final third.

On the other side, La Blanquirroja are well organized at the back, and that composure, along with an experienced shot stopper, should be enough to keep El Tri at bay, though we do not anticipate the Peruvians will create much themselves in the attack.

Our expert tipster partners at Sporita.com are predicting over 1.5 goals in this match. Click here to find out what else they are predicting for this game and for more of their tried-and-tested football tips.Over 1.5:data
ID:495124:1false2false3false:QQ:: from db desktop :LenBod:collect14688: