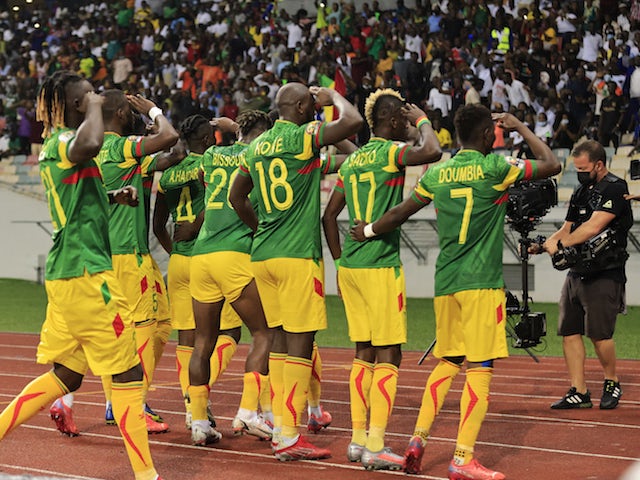 With their African Cup of Nations qualifying campaign already in motion, Mali and Zambia go head to head at the Stade du 26 Mars in a thrilling friendly fixture on Friday.

The Chipolopolo were denied a place in the 2022 African Nations Championship back in July and will head into the weekend seeking to pick up a morale-boosting result.

Mali maintained their perfect start to the 2023 Africa Cup of Nations qualifiers as they fought from behind to secure a hard-earned 3-1 victory away to South Sudan when the sides squared off on June 9.

After trailing at half time courtesy of an own goal from Metz defender Boubakar Kouyate, Monaco’s Mohamed Camara restored parity in the 58th minute before substitutes Sekou Koita and Aliou Dieng found the target in stoppage time to complete the comeback.

This followed a resounding 4-0 victory over Congo in their opening game in Group G of the qualifiers on June 4, when first-half goals from Camara, Kalifa Coulibaly and a brace from El Bilal Toure put the Red Devils to the sword.

Prior to both victories, Eric Chelle‘s men saw their hopes of reaching the upcoming World Cup come crashing down in the final hurdle as they were beaten 1-0 on aggregate by Tunisia in March’s playoffs, with Moussa Sissako‘s first-leg own goal proving to be the decider.

Mali head into the weekend on a run of five wins from their last six home games across all competitions — scoring an impressive 14 goals and keeping five clean sheets — with a 1-0 loss to Tunisia on March 25 being the only exception.

Zambia, on the other hand, failed to book their place in the 2023 Africa Nations Championship as they fell to a 1-0 aggregate defeat at the hands of Mozambique when the sides locked horns back in July.

Having held on for a first-leg goalless draw in Mozambique on July 24, the Chipoloplolo returned home six days later, where they were beaten 1-0 courtesy of Pachoio Lau Ha King‘s 81st-minute strike.

Prior to that, Aljosa Asanovic‘s men secured the 2022 COSAFA Cup title as they saw off Zambia and Botswana to book their place in the final on July 17, where an extra-time own goal from Edward Maova saw them narrowly edge out Namibia at the Moses Mabhida Stadium.

Zambia, who are currently second in Group H of the 2023 AFCON qualifiers with three points from six games, head into the weekend on a run of two wins in their last six friendly outings since the start of 2021, picking up two draws and losing twice in that time.

Mali have called up an experienced group for their double-header against Zambia, including goalkeeper Djigui Diarra, RB Leipzig’s Amadou Haidara and Monaco midfielder Camara.

Tottenham man Yves Bissouma has three goals for the national team and the 26-year-old should handle business at the centre of the park, while Reims youngster Toure will push for a starting role in attack.

Diadie Samassekou, who recently completed a move to Greek side Olympiacos, should team up with Bissouma in midfield, while Mamadou Fofana and Boubakar Kouyate should form the centre-back pairing.

Zambia have named a 23-man squad for their upcoming friendly games, including captain and Brighton midfielder Enock Mwepu and the experienced Clatous Chama, while Lawrence Mulenga has earned his first senior call-up.

The attacking duo of Fashion Sakala, who turns out for Rangers, and Leicester City’s Patson Daka, who has nine goals in Malian colours, should be tasked with spearheading the attack once again.

Joshua Mutale, who turned out for Power Dynamos, is one of 10 home-based players named in the squad and the 20-year-old will be looking to add to his six caps.

On the injury front, Asanovic will be unable to call upon the services of Lecce forward Lameck Banda and versatile midfielder Lubambo Musonda, who has 41 senior appearances under his belt.

While the full-time results remains somewhat unimportant, Zambia will be looking to restore some pride after failing to secure a place in the African Nations Championship. However, they face a resurgent Mali side who picked up two wins from their first two AFCON qualifying games. We predict a thrilling game contest with Les Aigles claiming a slender victory.

Our expert tipster partners at Sporita.com are predicting over 1.5 goals in this match. Click here to find out what else they are predicting for this game and for more of their tried-and-tested football tips.Over 1.5:curl
ID:495106:1false2false3false:QQ:: from db desktop :LenBod:collect14657: