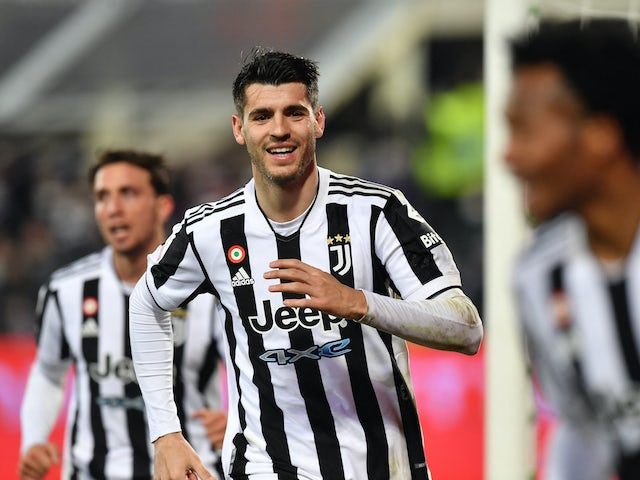 After a successful week in both league and cup, Juventus seek to continue their improbable Scudetto charge as they host struggling Spezia on Sunday.

Since their win over Empoli last weekend – followed by a fortuitous Coppa Italia win on Wednesday – Juve are seven points from the Serie A summit. Meanwhile, their visitors have lost three games on the spin – halting their ascent of the table in early 2022.

Unbeaten in 13 straight Serie A games – winning eight times in the process – Juventus have rediscovered their ability to grind out results in recent months, following more than a year of frustrating inconsistency

As they attempt to extend that run to a 14th match without defeat for the first time since late 2019, the Bianconeri can reflect on a 3-2 victory at Empoli last week – with January signing Dusan Vlahovic scoring twice at Stadio Carlo Castellani – and their subsequent cup success at Fiorentina.

In midweek, Max Allegri‘s men had to soak up some pressure and a total of 22 shots at goal, but emerged from the first leg of their Coppa Italia semi-final tie with a one-goal advantage – plus a crucial away goal, given the competition does not phase that rule out until next season.

Lorenzo Venuti‘s unfortunate own goal in stoppage time not only improves Juve’s chances of claiming silverware this term – with a defence of the Coppa still on the cards – but also maintains momentum, as the 36-times champions aim to sneak past the Milan clubs and Napoli to claim a most unlikely title triumph.

From the end of September onwards, Juventus have collected 48 points from 23 Serie A fixtures, which is more than any other side during that period, and they sit fourth in the standings – three points above Atalanta, who still have a game in hand.

Though they rarely produce free-flowing football, the Bianconeri are finally back in Scudetto contention – albeit as outsiders – and will expect to add three more points to their tally on Sunday evening: they have won all three of their previous games against Spezia in Serie A; scoring at least three times on each occasion.

After facing 31 shots on their goal and conceding 65% of the possession against Roma last Sunday, 10-man Spezia seemed to be on the brink of a precious point towards their target of Serie A survival, as their encounter at Stadio Alberto Picco entered stoppage time still goalless.

However, their visitors’ final attack of the game nearly brought about a dramatic match-winner, when Nicolo Zaniolo‘s header struck the crossbar and – after a goalmouth scramble and subsequent VAR delay – Roma were awarded a penalty, which Tammy Abraham then coolly slotted past the previously unbeatable Ivan Provedel.

January manager of the month Thiago Motta, therefore, has now overseen three consecutive defeats to end February, which leaves his side just four points above the drop zone having played a game more than 18th-placed Venezia.

Spezia have never before lost four in a row during their brief Serie A history – which began less than two years ago – but they will now attempt to repel a resurgent Juventus forward line with one of the division’s worst defensive units.

Having leaked 49 goals already, at a rate approaching two per game, the Ligurian outfit have also conceded shots on goal at an average of 17.5 per 90 minutes – surely not a recipe for success this weekend.

Juventus seem to have had a revolving door to their physio department over recent months, and Leonardo Bonucci is now back on the treatment table – having been ruled due to a calf problem.

The centre-back joins Federico Chiesa, Alex Sandro, Weston McKennie, Denis Zakaria and his longstanding defensive partner Giorgio Chiellini on the sidelines, but Paulo Dybala, Daniele Rugani and Federico Bernardeschi were all involved in training this week and could be ready to feature.

As a result of their defensive absences, the hosts should deploy the versatile Danilo in the centre of their back four, as Rugani is unlikely to be risked.

Meanwhile, up front, Dusan Vlahovic – only the sixth player in Serie A history to score 20 or more goals in successive Serie A campaigns before turning 23 – has scored four goals in three league games against Spezia, including a hat-trick for Fiorentina last October.

Spezia could be without the man who led their attack last time out, as M’bala Nzola has been receiving medical attention during the week. However, regular starter Rey Manaj is back from suspension and will replace the Angola international up front.

Ebrima Colley and Jacopo Sala remain doubtful, while Aimar Sher and Leo Sena are ruled out, and both Jakub Kiwior and Kelvin Amian are unavailable due to suspension – the latter having been sent off for a second bookable offence last week.

Following his ultimately fruitless heroics in the defeat to Roma, goalkeeper Ivan Provedel is the Italian with the best save percentage (73%) in Serie A this season, and may need to put such proficiency to the test in Turin.

Though it took a fightback from behind to win 3-2 in September’s reverse fixture, Juventus should have no such problems on Sunday, as they approach this encounter in far better form.

Even accounting for a series of absences in the home side’s squad, only Venezia have faced more shots on target than Spezia in Serie A this season, while city rivals Torino are the only team to have conceded fewer than Juve – indicating the probable outcome of this match.

Our expert tipster partners at Sporita.com are predicting over 2.5 goals in this match. Click here to find out what else they are predicting for this game and for more of their tried-and-tested football tips.Over 2.5:data
ID:479894:1false2false3false:QQ:: from db desktop :LenBod:collect13266: