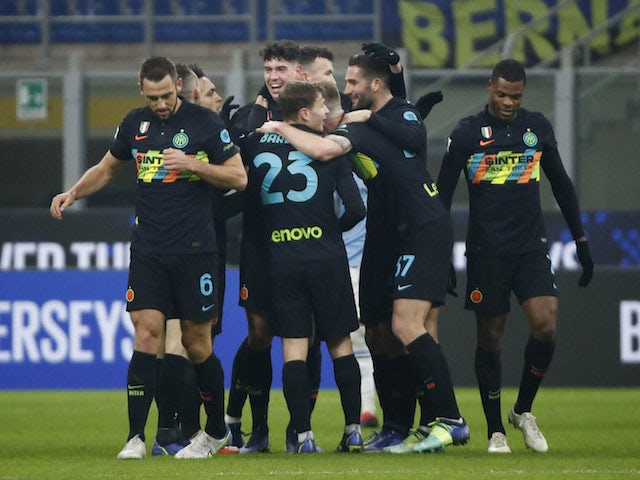 Seeking to add the Coppa Italia to their Serie A and Supercoppa triumphs of the past year, Inter Milan take on Empoli in the last 16 on Wednesday.

The Scudetto holders were beaten in the semi-finals last year, but begin their quest for an eighth national cup at San Siro having remained undefeated domestically since October.

Finally bringing to an end a 39-game long scoring streak in Serie A, Inter’s last outing at the weekend may have ended goalless, but the champions put on another absorbing show against their Lombardy rivals Atalanta.

Ahead of a local affair which they have historically dominated, the Nerazzurri arrived in Bergamo having already secured the first silverware of the season – lifting the Supercoppa Italiana with the last kick of extra time against old foes Juventus.

However, following on from their 2-2 draw with the same opponents earlier this season, Inter could not get the better of their hosts, despite dominating possession and carving out gilt-edged chances for both Arturo Vidal and Edin Dzeko.

Though they lost to Real Madrid in their final Champions League group fixture, Simone Inzaghi‘s men switch their attention to the Coppa Italia this week having last lost in the Italian top flight some 13 matches ago. Furthermore, their latest point helps them stay clear of city rivals Milan at the top of the table, as they continue a spirited title defence.

Having missed out on the double by falling to eventual winners Juventus in the final four last term, Inter will be determined to seal a meeting with either Roma or Serie B side Lecce in this year’s quarter-finals, which will be staged early next month.

Therefore, a repeat of the 2-0 victory they managed when last encountering Empoli, back in October, would be very much welcome on Wednesday.

Even though they almost inevitably lost to Inter at Stadio Castellani in the autumn – having gone down to 10 men early in the second half – Empoli were able to take three points from both fixtures either side of that game, amid an excellent to start to their Serie A return.

Since the turn of the year, however, the Azzurri have struggled to maintain such momentum and have picked up just two points so far in 2022 – slipping into the bottom half of the table.

Five straight games without a win for Aurelio Andreazzoli‘s side – who suffered a 5-1 home defeat to Sassuolo earlier this month – hardly constitutes a crisis, but Sunday’s draw at fellow promoted outfit Venezia means they are still seeking a first success since the previous round of the Coppa Italia.

A dramatic 4-3 victory over Verona at the last-32 stage saw the Tuscan team progress to this week’s big night out at San Siro, which seems a long way from their vanquishing of Vicenza in August’s first round.

As the Serie B champions prepare to meet their top-flight counterparts, then, they arrive at one of Calcio’s great venues as rank outsiders, but past shocks brought about by ‘the magic of the cup’ can at least offer a small sliver of hope.

Simone Inzaghi is set to make a number of changes to his starting lineup in midweek, amid a hectic period for Inter since returning from the mid-season break.

The champions reportedly boast the rare luxury of having no absentees ahead of Wednesday’s tie, as Alexis Sanchez and Edin Dzeko prepare to rotate out of the side, allowing the Argentinian duo of Lautaro Martinez and Joaquin Correa the chance to feature up front.

Fringe players such as Roberto Gagliardini, Federico Dimarco and Andrea Ranocchia may also be involved in the first XI, and evergreen goalkeeper Samir Handanovic could take a well-earned rest before Saturday’s game against Venezia.

Empoli, meanwhile, will be without full-back Fabiano Parisi again due to a hamstring problem, but teenage centre-back Mattia Viti returns from a Serie A suspension and could start.

Injured midfielder Nicolas Haas, who was selected for the win over Verona in the previous round, is expected to stay sidelined until next month, so squad members such as Leo Stulac and young Kristjan Asllani may be included by Aurelio Andreazzoli.

The veteran coach has plenty of options to choose from in attack, with Patrick Cutrone, Andrea La Mantia and Leonardo Mancuso all hoping to usurp Inter loanee Andrea Pinamonti up front.

With nothing to lose, Empoli may be able to rediscover the enterprising brand of football which elevated them to Serie A status and then upset a number of established members of the top flight late last year.

However, Inter’s squad is the deepest in Italy, and even a second-string Nerazzurri XI will contain sufficient pace, power and goal threat to seal safe passage through to the last eight.

Our expert tipster partners at Sporita.com are predicting over 2.5 goals in this match. Click here to find out what else they are predicting for this game and for more of their tried-and-tested football tips.Over 2.5:data
ID:475605:1false2false3false:QQ:: from db desktop :LenBod:collect11973: