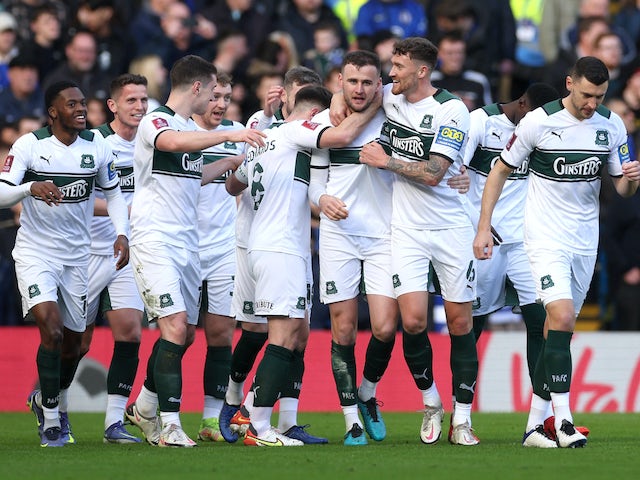 Seeking to pick up a third league win on the bounce for the second time this season, Plymouth Argyle take a trip to the Priestfield Stadium to face Gillingham on Saturday.

The visors will also be looking to complete a league double over the Gills after grinding out a narrow 1-0 when the sides squared off back in August’s reverse fixture.

Gillingham failed to make it two wins from two League One outings for the first time this season last Saturday when they were held to a 1-1 draw by Morecambe away from home.

Despite seeing less than 40 percent of the ball possession, substitute Ryan Jackson struck against the run of play in the 72nd minute to hand the Gills the lead, but fellow substitute Jonathan Obika restored parity 12 minutes later to force a share of the spoils.

This followed a 1-0 victory over Cambridge United when the sides squared off on February 8, when 30-year-old forward Vadaine Oliver scored a dramatic winner with just four minutes remaining on the clock.

With 26 points from 32 games, Neil Harris‘s men currently occupy 22nd place in the League One standings, four points above Crewe Alexandra and five off Wimbledon just outside the relegation places.

Having secured a 10th-placed finish last season, Gillingham’s horrid campaign so far has been owing to their lack of firepower in attack where they boast one of the division’s worst records with just 26 goals scored.

Plymouth Argyle, on the other hand, moved into the promotion playoffs places last Saturday when they picked up a hard-fought 1-0 win over a resilient Shrewsbury Town side.

With nothing to show for their impressive attacking display in the first half, the Pilgrims upped the ante after the interval with 26-year-old midfielder Conor Grant scoring the only goal of the game two minutes after the hour mark.

Manager Steven Schumacher will be delighted by his side’s recent performances as they have now won three and drawn one of their last four league outings, while only losing to Chelsea in extra time in their FA Cup tie on February 5 having forced a 1-1 draw in 90 minute at Stamford Bridge.

With 53 points from 30 games, Plymouth Argyle are currently sixth in the league standings, albeit with two games in hand over most of their league rivals, including Oxford United who are one spot below only on goal difference.

While they will look to keep the juggernaut rolling, next up is the daunting task of facing Gillingham at the Priestfield Stadium, where they have lost each of their last six visits since 2009.

Jackson opened his account for the season with his strike against Morecambe last time out and the 31-year-old could be rewarded with a starting role on Saturday.

On the injury front, Gillingham will take to the pitch without Daniel Adshead, who is on loan from Norwich City, after the 20-year-old midfielder fractured his metatarsal in November’s game against Portsmouth.

Meanwhile, Schumacher will be unable to call up the services of Zimbabwean defender Brendan Galloway, who has been out of action since November through a knee problem.

With 12 goals under his belt this season, Ryan Hardie is currently eighth in the League One top scorers chart and the Scottish forward will be looking to deliver the goods once again.

Luke Jephcott was on target in August’s reverse fixture against the Gills and the Welshman, who boasts eight goals and four assists this season, will certainly be one to look out for.

Gillingham have endured an underwhelming campaign so far and face the risk of dropping down to the fourth tier as they find themselves at the wrong end of the table. After struggling for form at the turn of the year, Plymouth Argyle appear to have found their rhythm once again and could pick up a fourth straight league win this weekend. We anticipate a one-sided affair with the visitors claiming all three points.

Our expert tipster partners at Sporita.com are predicting over 2.5 goals in this match. Click here to find out what else they are predicting for this game and for more of their tried-and-tested football tips.Over 2.5:data
ID:478413:1false2false3false:QQ:: from db desktop :LenBod:collect10404: