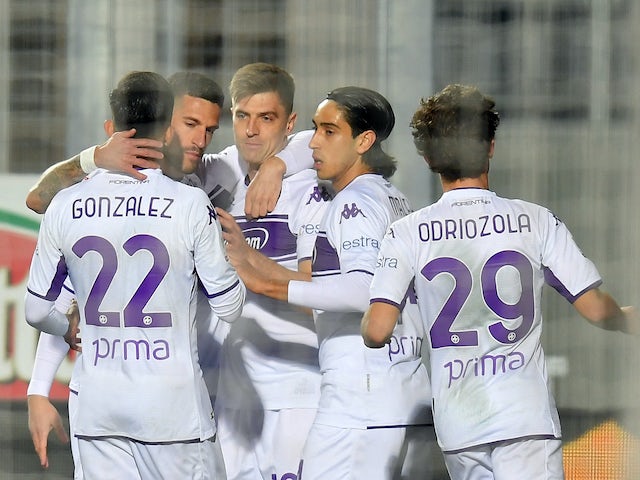 Sports Mole previews Sunday’s Serie A clash between Fiorentina and Atalanta BC, including predictions, team news and possible lineups.

Now separated by only five points and three places in the Serie A standings, eighth-placed Fiorentina and Atalanta BC – who sit fifth – meet at Stadio Artemio Franchi in Sunday’s early kickoff.

After bringing an end to their five-game winless run with Europa League victory in midweek, the visitors will look to get back on track in domestic competition, while the Viola won at in-form Spezia on Monday to stay in contention for the European places.

Bound for the Coppa Italia semi-finals after edging out Sunday’s visitors in the previous round earlier this month, Fiorentina continue to excite and entertain despite their apparently in-built inconsistency.

Having enjoyed two major cup wins against higher-ranked rivals since the start of the year – plus winning 6-0 against Genoa in Serie A – the Tuscan team have also been held by lowly Cagliari and thumped 3-0 by Lazio in recent weeks.

Nonetheless, they sit on the shoulders of the leading pack in pursuit of continental qualification for next season, following a late winner from Sofyan Amrabat in La Spezia which earned them a 2-1 win at the start of the week. After conceding a 74th-minute equaliser to former Viola loanee Kevin Agudelo, it was the Morocco international who proved Fiorentina’s unlikely saviour at Stadio Alberto Picco.

While their away form is now improving, Vincenzo Italiano‘s men have built their revival this term on making their headquarters a Florentine fortress – winning six of their last eight league games at Stadio Artemio Franchi and losing only once.

Not only that, but they have also racked up 25 goals during that spell – at least six more than any other Serie A side on home soil – at an average of over three per game.

Recent precedent does not favour them this weekend, though, as the Viola have won only one of their last six league encounters with Atalanta. They did, however, come out on top in their most recent meeting – a 2-1 victory in September’s reverse fixture.

Atalanta may have returned home from their last two league visits to the Franchi with maximum points, but their form since the turn of the year has seen the chasm between the two clubs diminish in the Serie A standings.

After a previous streak of six wins in a row, La Dea have now won only one of their last seven league matches – drawing four, with three ending goalless.

Once unthinkable for Gian Piero Gasperini‘s free-scoring side, the goals have dried up, as star striker Duvan Zapata was ruled out for several months and former Fiorentina frontman Luis Muriel struggles under the weight of expectation, having previously thrived in a role as the Bergamaschi’s ‘supersub’.

Only the width of the crossbar away from taking a surely unassailable 2-0 lead at home to Juventus last Sunday, the Nerazzurri saw Hans Hateboer‘s close-range volley bounce out, and inevitably their chief rivals for a top four place went on to grab a stoppage-time equaliser to cancel out Ruslan Malinovskyi‘s thunderous opening goal.

They have, at least, managed to forge ahead in their Europa League playoff tie with Greek Super League champions Olympiacos since that latest Serie A setback, with defender Berat Djimsiti being the unlikely source of both goals in a 2-1 first-leg win in Bergamo.

Curiously, Atalanta have been barely lukewarm on home soil this season, but are the only side still unbeaten on the road throughout the top five European leagues. With nine wins to date – fewer only than Manchester City’s 10 – confidence should still be high as they make the trip down to Tuscany for a fascinating Sunday afternoon clash.

Atalanta BC Serie A form:

Atalanta BC form (all competitions):

After serving suspensions on Monday, the Fiorentina midfield duo of Lucas Torreira and Giacomo Bonaventura are available once again, but Sofyan Amrabat scored the winner on an increasingly rare start and will hope to retain his place.

Having also found the net last time out, on-loan striker Krzysztof Piatek has previously registered three goals in as many Serie A matches against Atalanta and will vie with fellow January signing Arthur Cabral to start in the centre of the hosts’ front three.

As goalkeeper Pietro Terracciano has apparently picked up a knock, former Viola number one Bartlomiej Dragowski could make his return to the starting lineup on Sunday, having lost his place following several weeks on the sidelines with a thigh injury.

Meanwhile, Atalanta will be without Duvan Zapata, Aleksei Miranchuk and Jose Luis Palomino in Florence, but goalkeeper Juan Musso returns to the league lineup after missing the draw with Juventus through suspension.

The second-half star of the show against Juve was undoubtedly Ruslan Malinovskyi, who has now scored six goals this season, and the Ukraine international will be among the contenders to start in support of Luis Muriel up front.

Alternatively, recent acquisition Jeremie Boga could start as a ‘false nine’ for the away side, who are expected to bring Remo Freuler and Hans Hateboer back into the first XI after they began Thursday’s Europa League game on the bench.

We say: Fiorentina 1-2 Atalanta BC

An Atalanta squad which has lost direction since the turn of the year arrive at the Franchi having put together two good results since their Coppa Italia exit at the hands of the Viola.

As a result – and due to Fiorentina’s defensive deficiencies – they can continue their gradual return to form and extend a superb away record by picking up three points towards the top four chase.

Our expert tipster partners at Sporita.com are predicting over 2.5 goals in this match. Click here to find out what else they are predicting for this game and for more of their tried-and-tested football tips.Over 2.5:data
ID:478544:1false2false3false:QQ:: from db desktop :LenBod:collect13384: