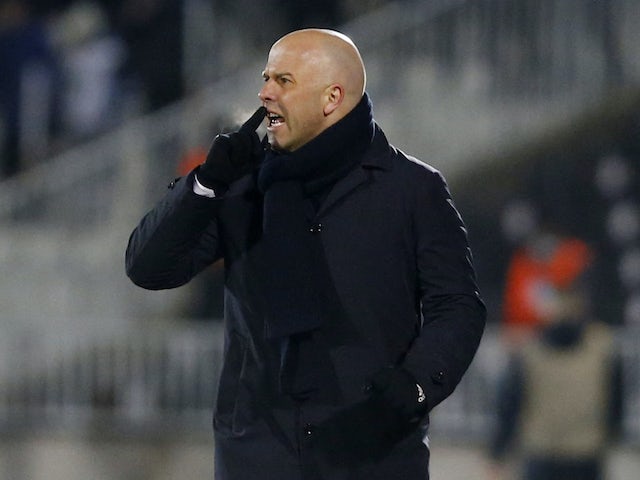 Feyenoord and Slavia Prague will do battle in the first leg of their Europa Conference League quarter-final tie in the Netherlands on Thursday.

The hosts cruised past Partizan to reach this stage, while their visitors beat LASK Linz in a dramatic two-legged affair.

Feyenoord dominated their Europa Conference League group, containing their quarter-final opponents, progressing automatically to the round of 16 as they finished top with four wins and two draws from their six matches.

The first meeting with Slavia Prague came at home in September, and the Dutch outfit prevailed with a 2-1 win thanks to goals from Orkun Kokcu and Bryan Linssen, before forcing a creditable draw in the reverse fixture in the Czech capital.

As a result of their first-placed finish, Arne Slot‘s side booked a round-of-16 meeting with Serbian outfit Partizan, and they took a big advantage in the first leg as Jens Toornstra hit a brace alongside goals from Luis Sinisterra, Lutsharel Geertruida and Cyriel Dessers in a dominant 5-2 away win.

Dessers and Linssen were again on the scoresheet alongside Reiss Nelson in the reverse leg, sealing an 8-3 aggregate win, with Slavia Prague now awaiting.

On the back of a 2-0 win over Willem II in the Eredivisie at the weekend, with Linssen and Sinisterra again adding to their goals tallies, De Stadionclub will aim to make use of home advantage and take a lead in the tie on Thursday.

After finishing second to the Dutch side in the group stage, Slavia Prague had to go through another knockout round, firstly taking on Turkish giants Fenerbache in a playoff tie.

Ibrahim Traore, Oscar Dorley and Ondrej Lingr got on the scoresheet in an impressive 3-2 away win, before Yira Sor hit a brace and Ivan Schranz found the net to ensure they won the second leg by the same scoreline and progressed to the final 16.

Austrian outfit LASK Linz then stood in their way, and the Slaviste again made a strong start, winning 4-1 at home thanks to another Sor double alongside goals from Traore and Peter Olayinka.

While they went on to suffer a narrow defeat in the away leg, goals from Olayinka, Alexander Bah and Sor ensured they did enough to progress on aggregate, and the Czech outfit now find themselves in the quarter-finals as a result.

On the back of a league draw with title rivals Viktoria Plzen, Jindrich Trpisovsky‘s side will take encouragement from the fact that they have netted 13 goals in four Conference League knockout games so far and will again look to get on the front foot in the first leg of their final-eight tie.

Feyenoord will likely remain without Lutsharel Geertruida and Justin Bijlow, as the pair continue spells in the treatment room, although attacker Alireza Jahanbakhsh was fit to feature off the bench at the weekend.

Luis Sinisterra will keep his place on the left wing, having contributed eight goals and six assists since the beginning of Europa Conference League qualifying and 11 goals and five assists in 25 Eredivisie appearances this season.

Bryan Linssen will be vying to lead the line after his goal off the bench in the win over Willem II, although Cyriel Dessers has also impressed up front this season following a loan move from Genk.

Slavia Prague come into the game without centre-back Aiham Ousou and left-back Srdan Plavsic, as both will serve suspensions after being sent off in the second leg against Partizan.

They have plenty of options to choose from in attack, given the team’s free-scoring form, and Yira Sor should continue to lead the line, having hit five goals in his last three continental appearances.

The other attacking spots in their 4-2-3-1 system will be fought for by the likes of Peter Olayinka, Ondrej Lingr, Mads Madsen and Ivan Schranz.

Given the two sides’ runs in the tournament so far, we certainly expect an exciting and high-scoring encounter.

Slavia Prague have impressed so far, and they will cause their hosts problems, but a trip to Feyenoord is a step up in difficulty and we see them falling short in the away leg.