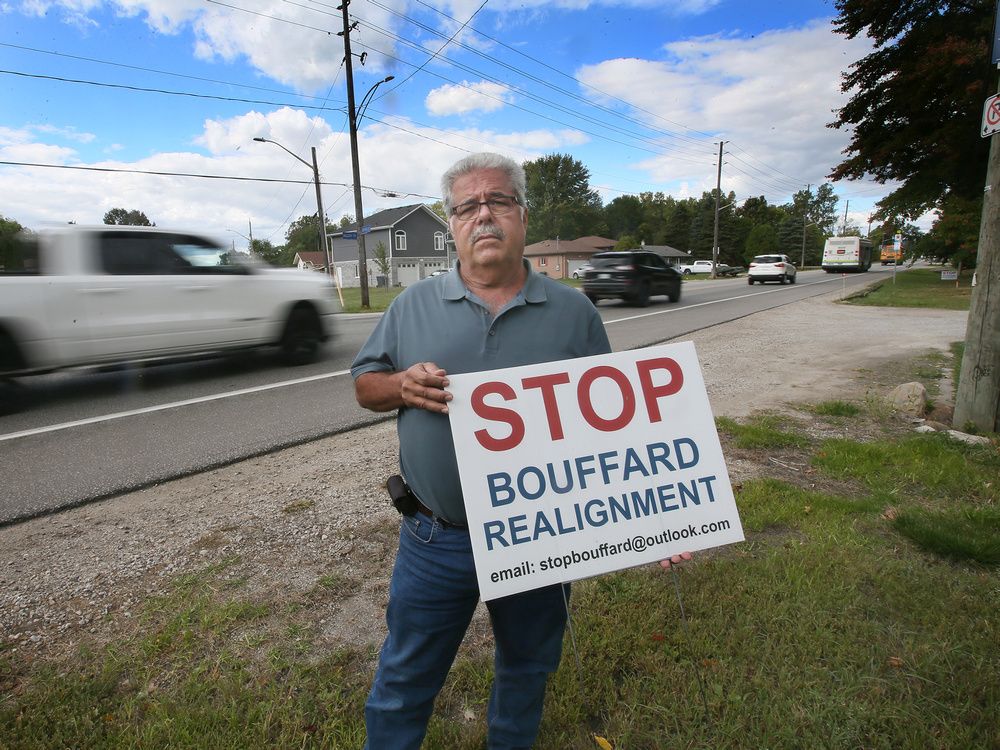 A group of residents will approach LaSalle council on Tuesday night, angry about upcoming plans to realign and unite Bouffard Road which for decades has been divided into two separate paths on each side of Malden Road about 100 metres apart.

The residents are expected to present a petition to town council with hundreds of names against the realignment out of concerns that a united thoroughfare on Bouffard will create added traffic in the area.

Only one home, owned by Tony Puzzuoli, would be expropriated under the plan, but realigning and connecting Bouffard is expected to create a new intersection at Malden with a stoplight and hasten commercial and residential development of the eastern section of Bouffard which today is largely vacant land.

“This makes me feel horrible, my wife is besides herself with anxiety,” said Puzzuoli, who has owned his home for 38 years and in direct path of the planned realignment. “This is my retirement home where I was going to settle into my garage and putt around.

“To me, I don’t see any reason for this, the residents around here don’t see it.”

The plan to realign Bouffard was first approved by the town in 2009 as part of the sweeping expansion plans and upgrading of Malden Road, which to date has completed a couple kilometres of initial improvements.

The environmental assessment for changes to Bouffard has also been completed, but residents in close vicinity, including Puzzuoli, say they were told years ago creation of nearby Laurier Parkway — another 100 metres away to the south of Bouffard — ended the any need for the Bouffard realignment in the near future.

The town even gave Puzzuoli the green light in roughly 2012 for a new garage on his property.

He believes developers starting to assemble pieces of property on Bouffard has pushed the proposed realignment to the forefront and back in front of council.

“(Town officials) told me they didn’t need it and now coming back and saying they need this,” Puzzuoli said. “The neighbours are concerned, they don’t like the idea of the heavy traffic we are going to get. They don’t want this. The road can still be developed and improved just the way it is.”

LaSalle’s Deputy Mayor Crystal Meloche called the planned Bouffard realignment a “difficult situation” for council and residents involved. She has previously voted in favour of the plan.

“A big part of why I said yes is anyone who lives in town knows that stretch of Malden Road from Normandy (Road) to Laurier (Parkway) is awful and dangerous,” said Meloche, already acclaimed to become the town’s next mayor.

She believes a lot of anger from the residents is due to “misinformation” as there is unlikely to be actual construction or need for the Bouffard realignment to happen for potentially another 10 years.

The town’s plan for the next stage of improvements on Malden is to start at Normandy and slowly work their way south towards Bouffard, Meloche said.

“Nobody is looking at taking (Puzzuoli’s) property right away,” she said. “But LaSalle is one of the fastest growing places in Windsor and Essex County. That area on Bouffard will see development, but that could be years out.

“It’s going to take us at least two years just to start work at Normandy. We still have to get some pieces of land there and then you are talking about ‘where are the funds going to come from?’ The big thing people need to understand is the work on Malden first needs to get to Reaume Road.”

That is many years away and once that upgrade work is completed, future councils may be satisfied and feel there is no longer any need to push forward with more work on Malden or undertake the Bouffard realignment, Meloche said.

“But that will be up to a future council to decide,” she said.

Such vows from anyone on council or connected with the town, however, mean little to Puzzuoli when it comes to the Bouffard realignment.

“I can see the land packaging (by developers on Bouffard) happening behind me,” he said. “(Town officials) have already showed me they can’t be trusted verbally, so how can we trust them verbally now?”