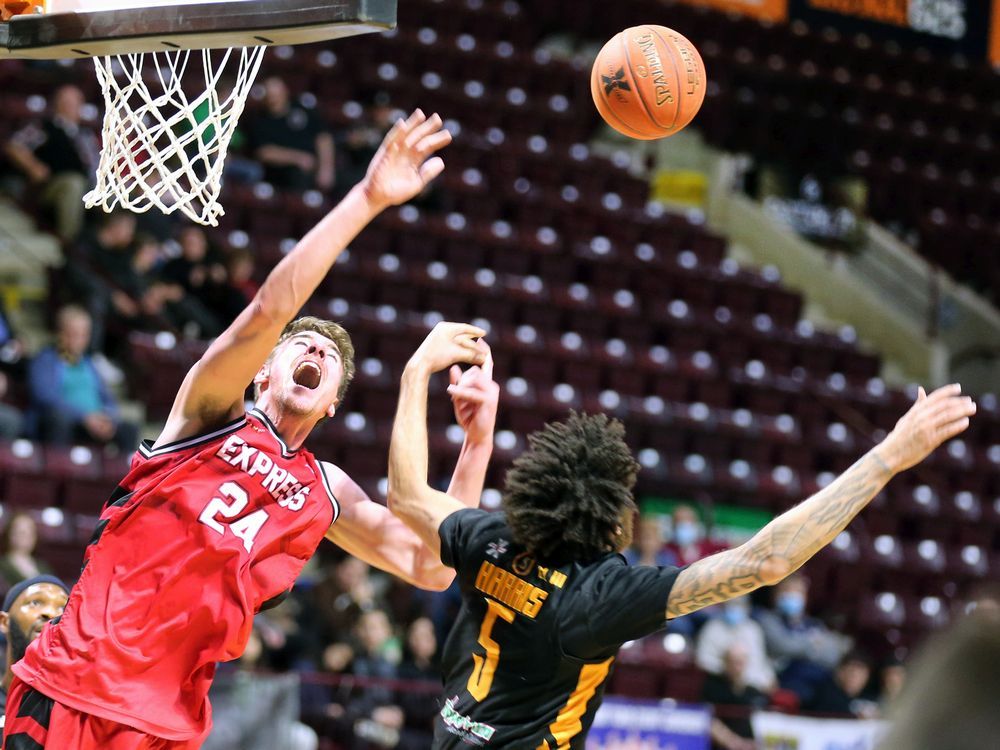 The Windsor Express had to rebuild a roster after a lost season to the COVID-19 pandemic.

Now, the club is trying to rebuild the roster again within the season after a string of injuries.

“We are definitely struggling in terms of keeping a healthy group on the floor since Game 1,” said Express head coach Bill Jones, who is also the team’s vice-president of basketball operations. “The roster we put together (to start the season) has only played one quarter.”

Playing for the fourth time in six days on Wednesday and with a short bench, the Express dropped a 112-109 decision in overtime to the Sudbury Five at the WFCU Centre.

With the loss, the Express remain winless in 11 games against NBL of Canada competition while the club is a perfect 3-0 in interlocking games against The Basketball League teams.

“Our problem playing 48 minutes,” said Jones, who saw his team let a six-point lead in the final three minutes of regulation slip away and another six-point edge in overtime.

That’s not a surprise considering for a club that has battled injuries also season and often plays with a short bench. The injuries started with the opener when shooting guard Kareem Canty went down with Achilles’ injury. Rudolphe Joly, Lance Tejada, Kobie Williams and Jachai Taylor have all spent time on the injured list. Tejada could be out for the rest of the season with a back injury.

“It’s two-fold in that there’s a lot of frustration, especially when you have winning tradition, but the reality is that these are unforeseen,” Jones said. “As a former player, you understand injuries are part of game. As winner, it’s Muprhy’s Law in that anything that can go wrong will go wrong.”

Even trying to fill holes hasn’t worked out perfectly for the Express. The club acquired guard Jordan Bedford from Dayton in The Basketball League, but it took two weeks for his paperwork to be cleared, which kept him off the court.

Bedford, who is from Louisiana, pushed the club to sign buddy William Claiborne. The 6-foot-11, 290-pound Claiborne signed three days after returning home from playing in Malta, but he missed Wednesday’s game with a slight injury.

“I heard great things, but didn’t know much,” the 25-year-old Claiborne said of the NBL of Canada “I was willing to take the chance and learn more and was willing to come here and put myself on a bigger and better stage. The organization’s great, the competition is great and my teammates are great, but I’m still learning.”

The club has tried to fill some other holes adding veteran Marvell Waithe and bringing back former standout Quinnel Brown. However, Jones is now looking forward to just two games in the next 13 days to allow some time for players to get more comfortable and also try to fill a few more holes on the roster.

“We’re still trying to compete, stabilize and fill gaps and that’s been part of our downfall in the league,” Jones said. “With a smaller number of teams, the talent that is there is very good. With TBL and guys finishing up over in Europe, it’s hard to get someone to come in.

“We have some time for identifying the type of player we want. A point guard is a priority. We like William Claiborne and he brings some stability. Now, we need someone who can run our offence.”

While the NBL of Canada plays an interlocking schedule with TBL this season, the good news for the Express is that all four teams in Canada will move to the playoffs.

“One positive is every team makes playoffs and we can still get roster ready for the playoffs,” Jones said. “We’re working in the office and on the court to keep guys together, stabilize and move forward. We know anything can happen in the playoffs.”