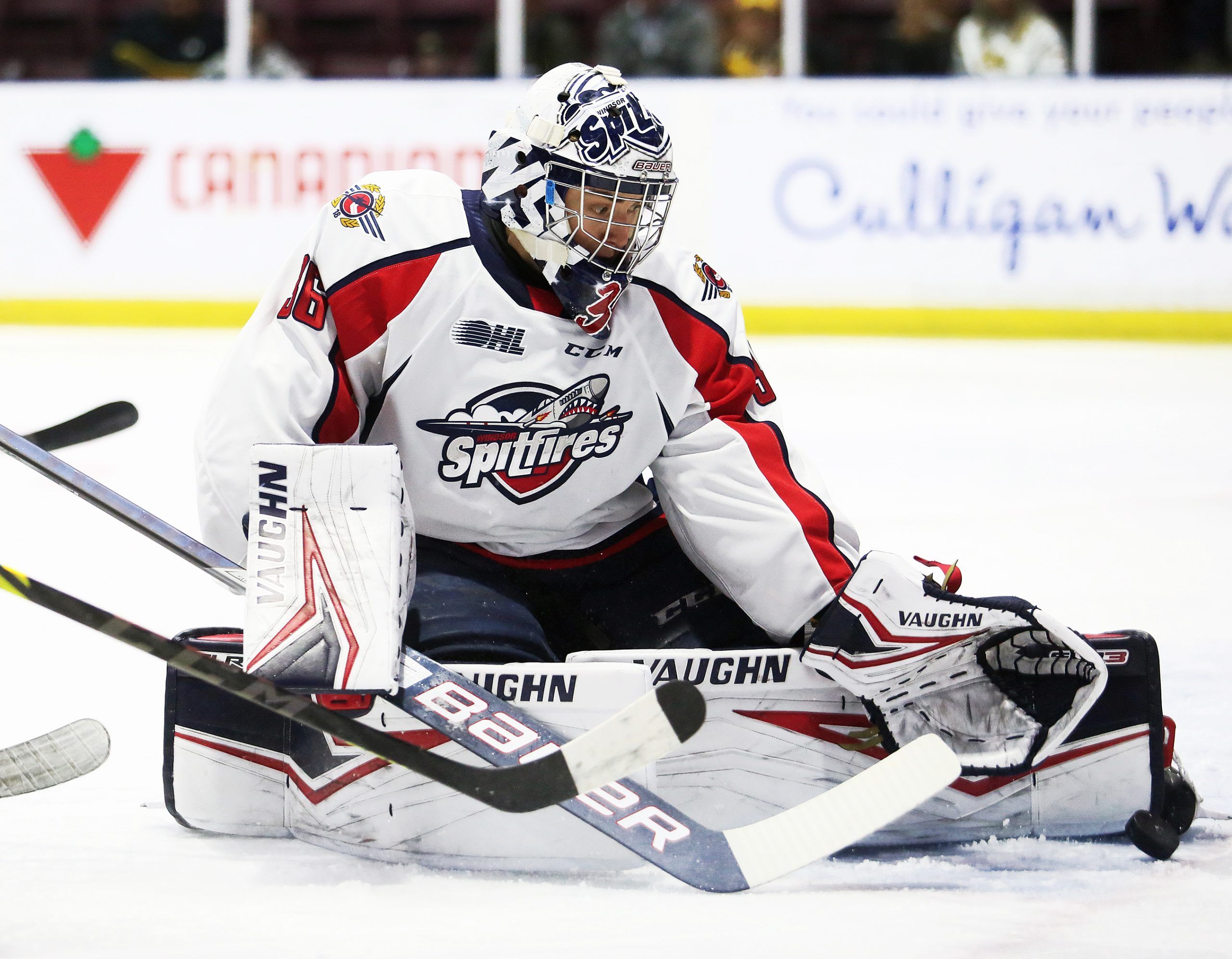 The waiting was finally over for Windsor Spitfires’ overage goaltender Matt Onuska.

With a nagging injury from last season no longer an issue, the 20-year-old Onuska made his exhibition debut for the Spitfires on Tuesday against the Flint Firebirds at the WFCU Centre.

“You want to be playing, but I think it was important to take time and get fully healthy and ready to play games,” said Onuska, who sat out Windsor’s first three exhibition games.

Coming over in a deal with the London Knights just prior to the trade deadline, Onuska went 19-3-1-1 in 26 regular-season games for the Spitfires and was 12-6-2 in 22 playoff games.

He picked up the win on Tuesday with a 30-save performance and got plenty of offensive support. Defenceman Michael Renwick and Oliver Peer each scored a pair of goals. Rookie A.J. Spellacy and defenceman Daniil Sobolev both had a goal and an assist. Alex Christopoulos had Windsor’s other goal while Colton Smith picked up four assists and Ryan Abraham three assists.

“We just wanted to be patient with him,” Spitfires’ head coach Marc Savard said of bringing Onuska back into the fold. “He had a great finish for us (last season) and he’s looked good in practice.”

With Windsor playing its final three exhibition games over five days, Onuska is happy to jump back into action.

“You definitely want to get into some exhibition games to get into game speed so when the regular season rolls around, you’re feeling good,” said Onuska, who saw the Spitfires improve to 2-2 in exhibition play.

Onuska started training camp working with goaltending coach Michael Leighton after practice before finally returning to full practice with his teammates a little over a week ago.

“It’s been a lot of practising,” Onuska said. “Making sure I’m in a controlled setting with Leights and making sure I was working on my own game and not pushing anything too hard.

“I’m feeling good and it’s exciting to finally not have that lingering in the back of my mind and just play my game.”

Forward Wylie Birkett is no longer with the the Spitfires.

A six-foot-six, 195-pound forward, Birkett was a ninth-round pick by the club in the 2020 OHL Draft.

The 18-year-old Birkett had three assists in 16 games with the Spitfires last season, but spent the majority of the campaign with the junior B LaSalle Vipers. He was pointless in two exhibition games this season.

Meanwhile, Smith returned to the club after spending rookie camp with the New York Islanders while Sobolev was also in the lineup for the club. The Montreal Canadiens’ draft pick was supposed to attend rookie camp with the NHL club in Buffalo, but visa issues kept him from crossing the border.

Islanders’ draft pick Matthew Maggio, who is a potential overage candidate with the Spitfires, has moved on the NHL’s team’s main training camp as has Dallas Stars’ prospect Wyatt Johnston, who was last season’s OHL scoring leader and most outstanding player.

Former Spitfires’ equipment manager Wally Tatomir passed away on Sunday at his home in Boone, N.C. He was 76.

A Leamington native, Tatomir worked for the Spitfires in the 1980’s and moved on with ownership when the club secured the expansion rights for the Detroit Jr. Red Wings.

He moved on to the NHL when ownership purchased the Hartford Whalers and then moved with the club when it became the Carolina Hurricanes.

Tatomir brought the Stanley Cup to Essex in 2006 after the the Hurricanes’ championship before retiring in 2002 after 17 seasons with the organization and more than 30 years in the business.