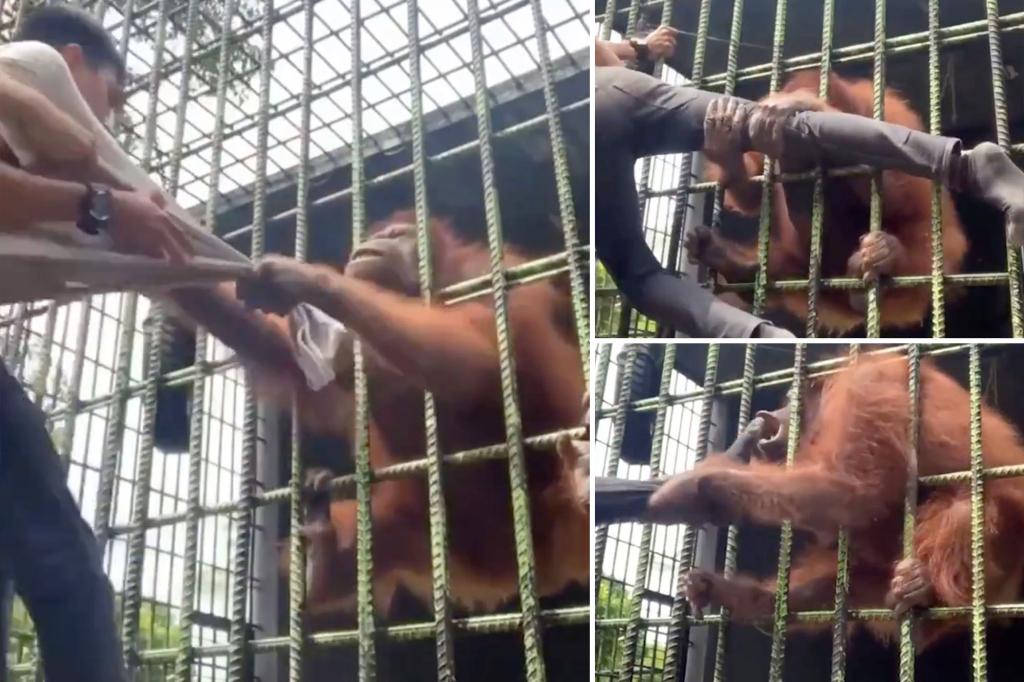 A wannabe social media influencer got an important clout lesson on Monday: Don’t monkey around with an agitated ape.

Hasanal Arifin hopped an enclosure fence at the Kasang Kulim Zoo in the Riau province of Indonesia, Newsflare reported. The 19-year-old allegedly taunted the resident orangutan — and that’s when the peeved primate grabbed him by the shirt and yanked him toward the cage, as captured in an alarming video with more than 16.5 million views on Twitter alone.

“The visitor wanted to take a video [and] create content without permission,” an outraged zookeeper identified only as Ides told the outlet. “He crossed the safety distance barrier. This is very dangerous and violates the rules. We have already reprimanded the man. Please take the rules seriously.”

Footage of the incident — which appears to have first been posted on Reddit but went viral after TMZ picked it up — shows Arifin yanking his arm away only for the primate to grab his shirt and pull him closer. (Orangutan’s arms can grow to 7-feet long, according to the World Wildlife Fund.) Eventually, the orangutan manages to get a hold on the teen’s legs and nearly flips him.

“This was idiotic, stupid behavior,” Ides said. “It also put himself and others in great danger. I have reminded staff to ensure that no visitors have the chance to do this again.”

According to zoo staff, the prankster managed to covertly hop the fence when staffers were on a lunch break.

Arifin, who didn’t suffer any injuries, was saved by a passerby who alerted staffers immediately and managed to calm the the creature down until they arrived.

The prankster was immediately thrown out of the zoo and reprimanded by staff.

Orangutan’s are generally nonaggressive towards humans, however, they are considered to be five to seven times stronger than humans, India Times reported.

“Google people who have been attacked by apes. They are strong enough to rip you to pieces. And they go for your face and your hands first,” commented one self-proclaimed ape experton Reddit. Meanwhile, one sharp-eared Twitter user claimed to have pinpointed the exact moment the distressed teen’s rescuer could be heard passing gas in the clip, declaring “I can’t unhear it.”

“”All things considered, he would have probably have been OK. Orangutans are one of the more docile apes out there. Not one recorded death of a human from an orangutan,” another social media pundit chimed in.

“This orangutan was clearly agitated, but he didn’t seem to want to do any serious harm from what I could see, but then again I’m no expert.”