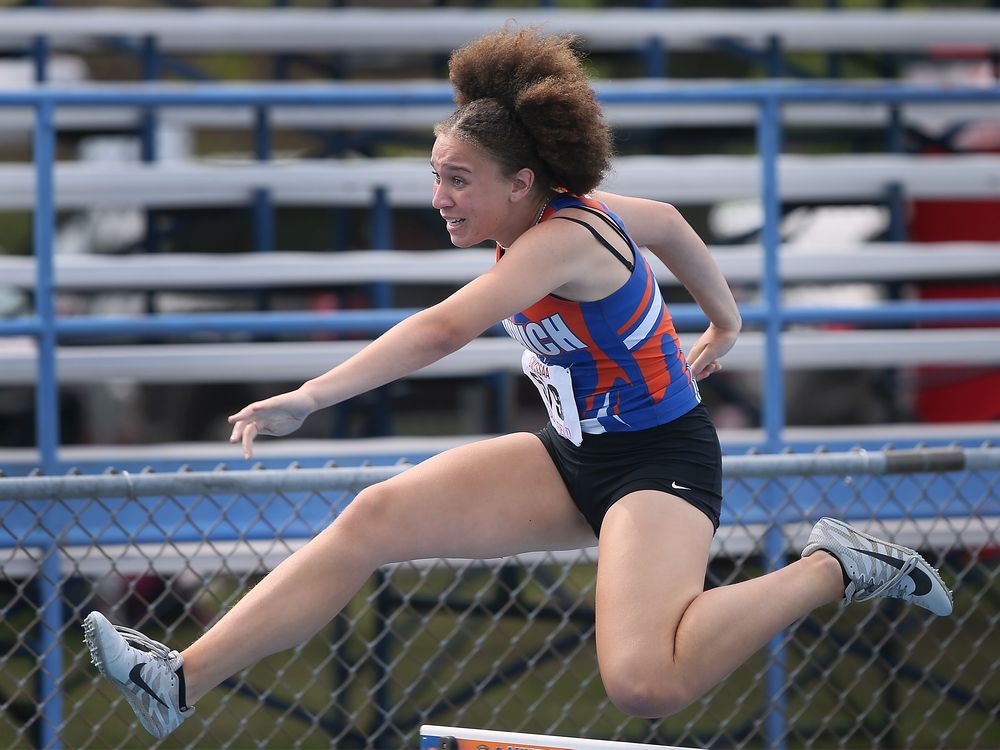 The Sandwich Sabres’ track and field team picked up right where it left off before the COVID-19 pandemic.

Sandwich won the OFSAA overall team title in track and field in 2019, but the pandemic forced the cancellation of the event in 2020 and 2021.

“It was just a phenomenal year,” Sabres’ head coach Rob Moore said. “To my knowledge, it the first-time ever that an area team has won the guys and the girls (overall) title together.”

Sandwich took the girls’ title with 110 points, which was 37 points ahead of the team’s closest rival. The boys finished with 44 points to share the title with St. Thomas St. Joseph. Both teams received OFSAA championship banners.

“We didn’t know, as a coaching staff, what we going to be,” Moore said of the team’s return to play this year. “We knew the Grade 12’s coming back and a few of the individuals that competed in club.

“When we started seeing results after WECSSAA and SWOSSAA, we thought we had a chance, depending on how many we could get to OFSAA (from regionals) and we had 41.”

Sandwich athletes picked up a dozen medals over the three-day meet, which was two more than the 2019 championship team.

Leading the way was Ella Steel-Douglas, who picked up her fourth gold medal of the meet by winning the novice girls’ 300-metre hurdles in 45.82.

Sandwich also closed the meet on Saturday with three silver medals. Alex Seagris took second in the senior girls’ javelin with a throw of 42.24 metres. Oma Chaaban took silver in the junior boys’ 200 metres in 22.22 second, which was just 5/100ths of a second back of the winner. Joelle Olla, Ruby Radovich, Savannah Baillargeon and Nicole Seagris teamed to take silver in the 4×400-metre relay in 4:02.79. Tatem Combres added a bronze medal in the senior boys’ javelin with a throw of 52.21 metres.

Two other area athletes also found the podium on Saturday. L’Essor’s Rose Forshaw claimed her third medal of the meet with a bronze medal in the senior girls’ javelin with a best effort of 38.47 metres. Lajeunesse’s Karol Jasniewicz also earned a bronze medal in the junior boys’ 800 metres in 2:01.84.

“The future bodes well,” Moore said. “Out of the 41 athletes that went to OFSAA, only six are graduating.”

The Holy Names Knights settled for the silver medal at the OFSAA boys’ AAA soccer championship in London.

The Knights fell 1-0 to Hamilton Bishop P.F. Reding in the gold-medal game. Hamilton got the game’s only goal two minutes into the match. Mateo Nepszy hit the crossbar shortly after that, but the Knights could not pull even.

Holy Names got to the final with a thrilling win over Ajax Brother Andre, which had to be settled by penalties.

Scoreless through regulation, Gabe Steele scored in overtime, but Ajax came back to tie it and force penalties.

In the fifth round, Steele needed to score to extend it. The goalie made the save, but the ref ruled he left the line early. Steele scored with the second chance and Rob Mancini won it in the next round.

The Cardinal Carter Cougars came up just short of reaching the gold-medal match at the OFSAA boys’ A soccer championship in Joran Station.

The Cougars had a 2-1 lead late in regulation time when the referee awarded a penalty shot to Breslau St. John’s Kilmarnock in the semis. That sent the game to extra time where it finished 6-2 with Parker Steel and Julian St. Pierre scoring for Cardinal Carter

That sent the Cougars to the bronze-medal game where Steel’s goal got the club to extra time 1-1 against Hamilton District Christian, but Cardinal Carter, which also struggled with injuries, was outscored 4-2 in the the penalty shootout.

The L’Essor Aigles fell 1-0 to London Mother Teresa in the bronze-medal game at the OFSAA girls’ AA soccer championship in Bradford.

Earlier in the day, the Aigles lost 2-1 on penalties to host Bradford Trinity. Madison Guignard scored for the Aigles, who were missing several key players due to injury.