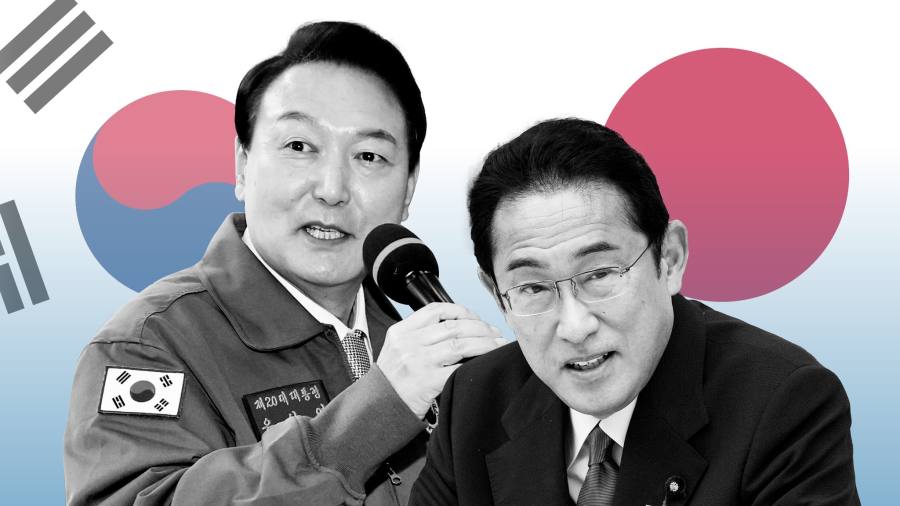 At the Nato summit in Madrid this month, one of the most important meetings could end up being between the leaders of the US and two crucial but fractious allies from East Asia: Japan and South Korea.

Quiet discussions are under way to arrange what would be the first meeting of a Japanese prime minister and South Korean president since late 2019 and a chance to set aside historic disputes to focus on the pressing challenges of an emboldened China and nuclear-armed North Korea.

Success could help to reshape the diplomatic map of East Asia and mark a new chapter for bilateral relations between Tokyo and Seoul that have sunk to historic lows.

Leadership changes in both countries have brightened the prospects for reconciliation. Fumio Kishida, Japan’s prime minister since last October, declared in April that it was “now or never” to fix the hostile relationship. Yoon Suk-yeol, who was inaugurated as South Korean president in May, has called for “a rethink” in relations and campaigned on a promise to improve ties.

“We cannot win a war on the Korean peninsula without Japan,” said Chun, noting the importance of Japanese airfields and ports to US military support for Seoul. “It’s like an aircraft carrier that can never be sunk, it is critical to Korea’s security.”

Improving ties between East Asia’s most powerful democracies will not be easy, however. US officials attempted to bring Kishida and Yoon together during President Joe Biden’s trip to Asia last month. But Japanese officials pushed back against the idea, saying they wanted to see how Yoon would act in office after a tightly contested election.

People with knowledge of the discussions said diplomatic efforts had now shifted to arranging an in-person encounter at the Nato summit on June 28-29. Japanese officials have been encouraged by a landslide victory for Yoon’s ruling party in local elections last week that strengthened the new president’s political position.

Japan and South Korea are not Nato members, but have been invited to join the summit as part of US-led efforts to build a coalition of democracies to confront security challenges heightened by Russia’s invasion of Ukraine.

Officials and analysts caution that, even if it happens, a trilateral summit will be just a starting point. Both Kishida and Yoon risk a public backlash if they are viewed as sidestepping thorny issues related to Japanese use of forced labour and sexual slavery during the second world war.

Many South Koreans see a 1965 treaty that resolved all claims related to Japan’s 1910-45 occupation as illegitimate, while many in Japan do not trust South Korea to respect any new agreement to settle historic issues.

A joint 2021 poll by South Korea’s East Asia Institute and Japan’s The Genron NPO, found 63 per cent of South Koreans had a negative impression of Japan, down from 72 per cent a year earlier. But in Japan sentiment worsened, with 49 per cent feeling similarly about South Korea, up from 46 per cent.

“Security co-operation may move forward behind the scenes. But it’s difficult to be vocal about it considering the public sentiment,” said Kohtaro Ito, an expert on South Korea at the Canon Institute for Global Studies.

The last time the two countries came close to a rapprochement was in 2015 when Kishida as foreign minister helped broker a deal to resolve the issue of South Korean “comfort women” forced into prostitution during the second world war.

In a book published in 2020, Kishida stressed the importance of security. “To be honest, South Korea’s behaviour has been upsetting. But when it comes to countering North Korea, it’s impossible for Japan to act alone without South Korea’s co-operation,” he wrote.

Yoon, a former prosecutor with no foreign policy experience, has surrounded himself with experts on Japan including foreign minister Park Jin, who has studied at the University of Tokyo.

“Historically, the general approach of South Korean conservative administrations has been to try to separate contemporary issues [like regional security] from historical and territorial questions,” said Rachel Minyoung Lee, a non-resident fellow at the Stimson Center think-tank in Washington. “Yoon will continue in that tradition.”

While the Japanese have been encouraged by efforts by members of Yoon’s inner circle to improve ties, relations remain at the mercy of future Korean court decisions on the “comfort women” issue and reparations for forced labour.

Moon Jae-in, Yoon’s leftwing predecessor known for his hardline stance on Japan, promised not to intervene in the court cases, limiting diplomatic routes for resolving the dispute.

But two Korean analysts, who requested anonymity owing to the sensitivity of the issue, said the government had more sway over the judiciary than was officially admitted.

“We may find that some of the conservative judges who kept a low profile during the Moon era make a comeback under Yoon,” said one of the analysts. “We have seen it work that way in the past.”

For Kishida, any action to improve ties beyond the proposed trilateral meeting could be politically risky ahead of elections for Japan’s upper house of parliament in July.

Officials in Seoul want Japan to remove the export controls, but hardline members of the ruling Liberal Democratic party, embittered by the breakdown of the 2015 deal, oppose offering such an olive branch.

“It’s going to be very difficult, since resolving the Japan-South Korea dispute will require significant leadership involving a drastic change in direction,” said Junya Nishino, an expert on South Korea at Keio University.