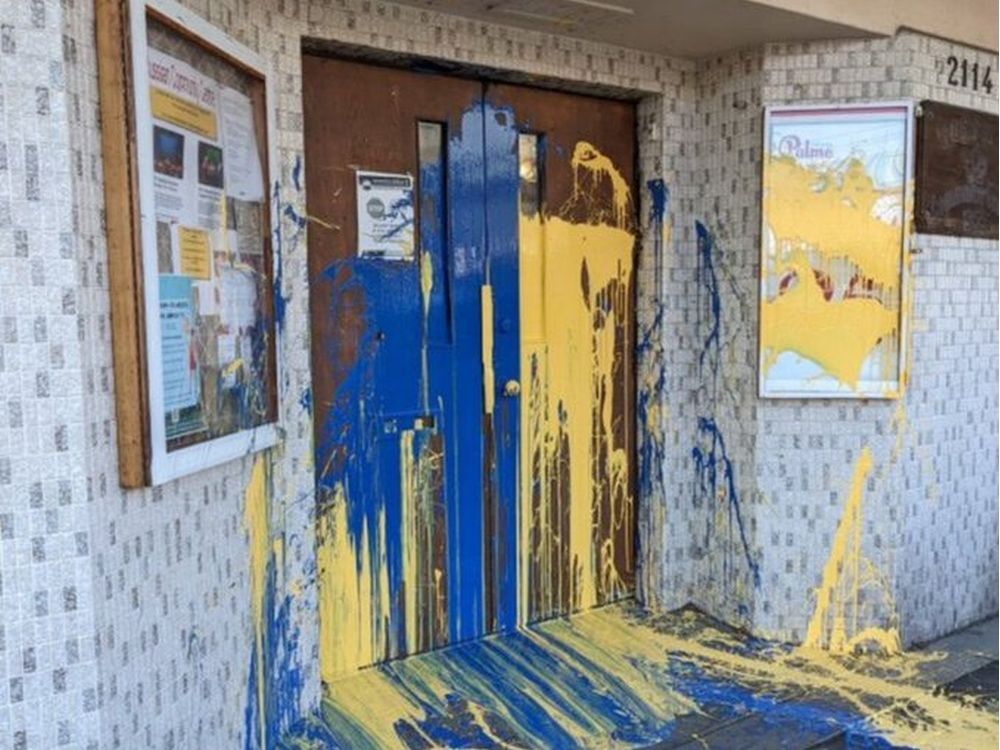 Members of the Russian Community Centre in Kitsilano are reeling after a case of vandalism as many of them have friends and relatives who have been displaced by Russia’s invasion of Ukraine, says the centre’s board chair.

“What happened with the paint situation really impacted a lot of our members. It was like a slap in the face” at an already emotional time, said Ariadna McKenna.

“We all have many (people) in Ukraine and Russia that we have been in touch with, trying to find out if they are OK, if they are able to get out.”

The centre was started by a wave of immigrants to Vancouver who escaped tyranny by fleeing Russia in the 1950s. Over the years, it has aimed to help uphold traditions related to food and culture, said McKenna.

The centre’s building was covered on Saturdaywith blue and yellow paint in the colours of the Ukrainian flag. It has been in its location on West Fourth Avenue near Arbutus since the late 1950s and is a member of the local business improvement association.

“It did dawn on me a few times, that it could be targeted, just by being called the ‘Russian Hall,” said Jane McFadden, executive director of the West 4th Avenue Business Improvement Association.

McFadden said she had previously only been in touch with the Russian Community Centre via an email address. That’s how they had successfully communicated for years.

But now, she has the cell phone numbers of several of its members in order to be in close touch on security issues as the conflict escalates in Ukraine.

“We’ve got our security and everyone’s got video surveillance on and ready and I know police were there yesterday speaking to a lot of (the other businesses on Fourth Avenue), so people are more alert and aware.”

McKenna said members of the centre talked about keeping the blue and yellow paint on the building to show respect for Ukraine, but in the end, they scrubbed it off because it was all over the sidewalk and they wanted to minimize negative attention. She said passersby offered to help remove the paint.

A University of B.C. political science professor, who specializes in war and international conflict management, said accurate and inaccurate images circulating on social media about the situation in Ukraine are leading to an “algorithmic polarization of people. Some people want to take action and it can be misdirected.”

Allen Sens said the vandalism at the Russian Community Centre or threatening calls being made to owners of small businesses in Vancouver with the word “Russian” in their names are “completely unacceptable because these are people who have no say and probably no sympathies with what is going on in Russia. That’s the simple answer. The trickier answer is that people’s passions are ignited and they are getting enraged. It’s a country in a conflict whose citizens have been demonized.”

Sgt. Steve Addision said Sunday the Vancouver Police Department is still working to identify the person or people responsible for the vandalism.