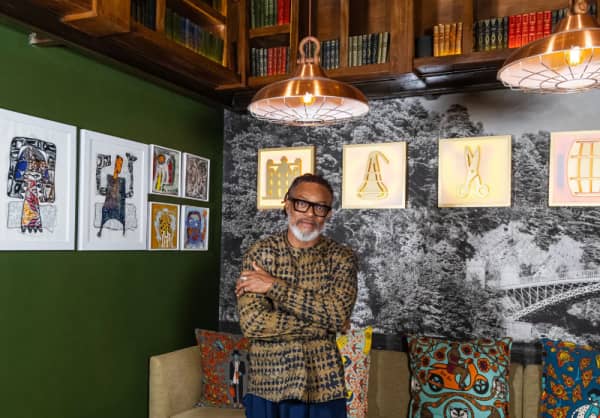 Lagos has become a hotbed for architecture and design, and the city is attracting and celebrating some exceptional talents. As there is no one definition of African design, the city’s design output is as diverse as its creators. Get to know 7 unique creatives, who are making their mark and defining the city’s style. Inspired by West African talking drums, Lani Adeoye’s furniture and light fixtures—elegant, rattan-like metal sculptures that can take months to complete. Tosin Oshinowo calls her design aesthetic “Afro-minimalism”. She has earned acclaim for her light-suffused residences and hospitality projects, like the Sencillo Lagos rental villa on Ilashe island. Five years ago, Seun Oduwole, found himself wondering: “Why can’t we have a museum space [in Lagos] that operates at the same level as the Louvre or MoMA?” Shortly thereafter, the John Randle Centre for Yoruba Culture and History was born. When Patrick Koshoni converted his family’s Victoria Island compound into the beloved members’ lounge Mìlíkì (Yoruba slang for “milk”) in 2013, he didn’t expect it to become the epicenter of the city’s creative cognoscenti.