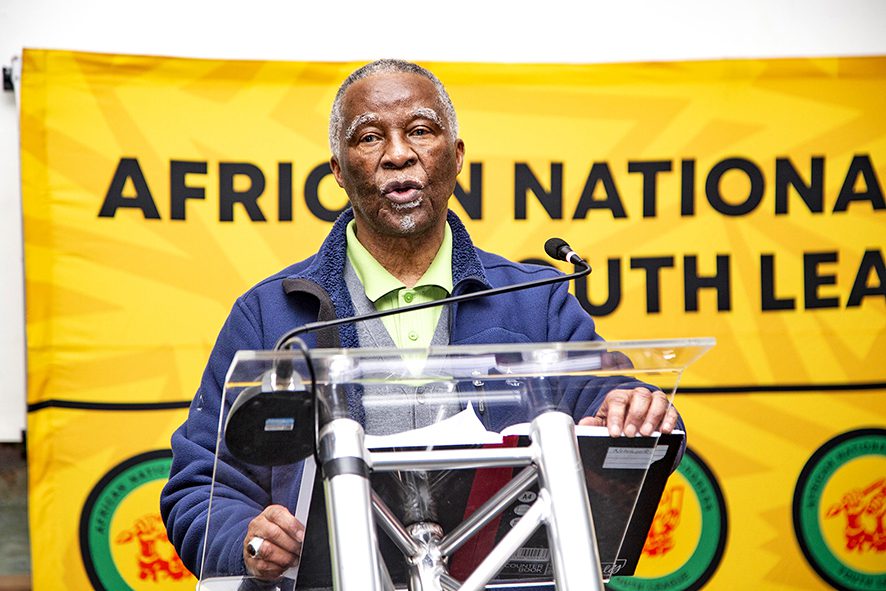 The topic of Thabo Mbeki’s political legacy is moot. Even his position between global icon Nelson Mandela and alleged state-capture architect Jacob Zuma is quite telling.

For the most part, Mandela, whom he succeeded, basked in the glow of post-apartheid reconciliation and euphoria. But Mbeki could not afford that luxury. There was serious work to be done in building a post-apartheid political dispensation. Much of this arduous task fell on him, whom many considered Mandela’s de facto prime minister.

Mbeki is attractive to many intellectuals beyond South Africa because of his thinking about pan-Africanism, the African renaissance and neocolonialism. All these issues are pertinent in Africa and its vast diaspora, which put Mbeki in the spotlight of the pan-Africanist movement. Numerous works have been written on his tenure as president and his legacy.

Mbeki found his second wind as probably the most respected African elder statesman after his ignominious exit as ANC leader. His transition has been without great fanfare but quite effective.

As the ANC became afflicted by corruption and deadly politicking, Mbeki kept above the fray. His nemesis and erstwhile deputy, Jacob Zuma, who succeeded him as president, went further in tarnishing the ANC brand and legacy in the most disrespectful manner.

This is the uncomfortable position from which Mbeki is compelled to be assessed.

Mbeki is not a charismatic leader, neither does he pretend to be. He does not possess Mandela’s charm or Zuma’s demotic earthiness, which can move people to declare they’d kill for him.

Mandela had a winning smile that floored Hollywood A-listers. Zuma sang and danced his way into the hearts of the South African masses and wasn’t afraid to make a fool of himself. Mbeki always remained aloof. His appeal was largely among intellectuals.

Mbeki is rather a conscientious technocrat equally at home with other technocrats such as Phumzile Mlambo-Ngcuka and Trevor Manuel. The two served in prominent positions in Mbeki’s cabinet.

During his tenure as ANC president (1997-2007), Mbeki couldn’t woo the rank and file in his party with rousing speeches delivered with visceral directness. That isn’t his forte. He is, instead, a manager of systems and institutions and a purveyor of ideas.

Mbeki is a promoter of pan-Africanism – the quest to unite Africans in pursuit of a united, prosperous Africa. Frantz Fanon, the Haitian revolution, the Harlem Renaissance and important milestones of black empowerment powerfully shaped Mbeki’s ideological make-up. There is a certain cosmopolitanism present in his outlook. But the masses of the South African people did not appreciate it. Instead, he was deemed cold, unresponsive and, therefore, uninteresting. This, more than any other failing, was the reason for his political downfall.

His detractors and the party cast their lot with a more engaging Zuma in December 2007, which turned out not to be the best of choices. Mbeki was subsequently unceremoniously fired as president of the country by the ANC in September 2008.

Mbeki’s rejection by his party undoubtedly reduced his political influence in the ANC. But he did not become idle. He worked diligently on the continental stage, where his expertise and experience are highly valued. He has been traversing the continent on behalf of the AU, putting out political fires and helping broker peace with an energy and commitment that many of his age don’t possess.

All through Zuma’s scandals and motions of impeachment, Mbeki more or less maintained his silence and dignity.

Zuma, on the other hand, abdicated his powers to a shady cabal that influenced key government appointments and commandeered most of the lucrative government contracts.

Then people started to think that perhaps Mbeki wasn’t that bad after all. Some might argue that he had dictatorial tendencies, but he was always his own man.

After years in political purgatory Mbeki seems to have undergone a resurrection, based on the unmitigated disasters of his successor. He is now helping to save the ANC.

It is a pity that Mbeki’s invaluable work on continental affairs isn’t valued in South Africa. Beyond South Africa, Mbeki is increasingly being considered among African intellectuals such as Toyin Falola (Nigeria), Paul Zeleza (Malawi) and Mammo Muchie (Ethiopia). He’s placed in the same league as African philosopher-kings like Senegal’s Leopold Sedar Senghor, Ghana’s Kwame
Nkrumah and Tanzania’s Julius Nyerere.

At 80, Mbeki still articulates his pet concerns of African unity, African renaissance and pan-Africanism with diligence and precision. His analyses are usually well-considered and deserving of attention. His interventions to end the Ivorian and South Sudanese crises are noteworthy.

Mbeki continues to function as probably the most resourceful elder statesman on the continent. He is involved in efforts to solve the impasse that has pitted Anglophone Cameroonians against their Francophone counterparts.

He is also involved in efforts to resolve the crisis in the Great Lakes Region. Because violence anywhere on the continent tends to have broader continental consequences, Mbeki makes it his business to try to prevent outbreaks of war and mayhem.

Mbeki has successfully transitioned from being an old horse of his party, the ANC, to a highly venerated and in-demand African elder statesman. And just as Nkrumah was, he is more respected on the continent than in his country.