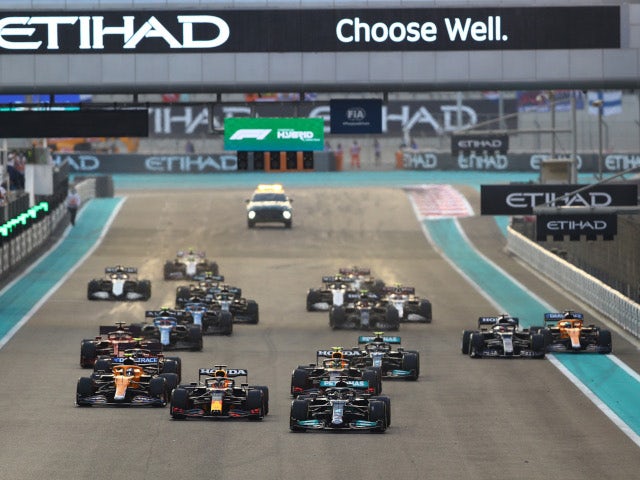 Lewis Hamilton appeared to be on course for his eighth world title having led from start to finish, but a safety car was required with six laps remaining after a crash involving Nicolas Lafiti.

Race control initially ruled that cars which had been overtaken by Hamilton would stay ahead of Verstappen, a ruling which was initially deemed necessary to ensure that one more lap of racing could take place.

However, the decision changed on the penultimate lap and Verstappen, on by far the fresher tyres, was able to pass Hamilton and stay ahead with DRS not an option.

Verstappen becomes world champion for the first time, winning by a margin of six points, and ends Hamilton’s four-year dominance in the process.

All eyes were on the race down to the first corner, Hamilton fastest off the mark in his Mercedes to edge ahead, but the drama started several corners later as Verstappen made an ambitious move which forced Hamilton off the track.

Despite Verstappen remaining within the allowed parameters, stewards decided that Hamilton did not have to concede first place, ruling that no investigation was required.

Verstappen and Red Bull were frustrated, a feeling which worsened when the Dutchman complained about his rear tyres and was forced to come in earlier than scheduled.

Hamilton followed suit and maintained his advantage, but the Briton soon caught fellow Red Bull driver Sergio Perez, who valiantly kept Hamilton at bay and allowed Verstappen to close the gap to a couple of seconds.

The middle part of the race was relatively uneventful until the introduction of the virtual safety car, Verstappen taking the opportunity to pit for fresher tyres.

With a lead of 21 seconds, Mercedes made the decision to keep Hamilton out, but Verstappen was quickly taking just under a second off the race leader per lap with 20 laps remaining.

At 10 laps left, Verstappen had moved to within 12-and-a-half seconds of Hamilton, but the pair of them having to lap several of the middle-order helped the leader more so than his pursuer.

However, the drama intensified as Nicolas Latifi crashed, resulting in a safety car and effectively giving Verstappen a free pit stop when Hamilton was unable to do so if he was to keep track position.

At one stage, it appeared that Hamilton may be crowned world champion behind the safety car, but the decision to deliver one lap of racing will go down in the sport’s folklore.

With Sergio Perez having retired before the drama unfolded, Carlos Sainz Jr was able to claim the last place on the podium.