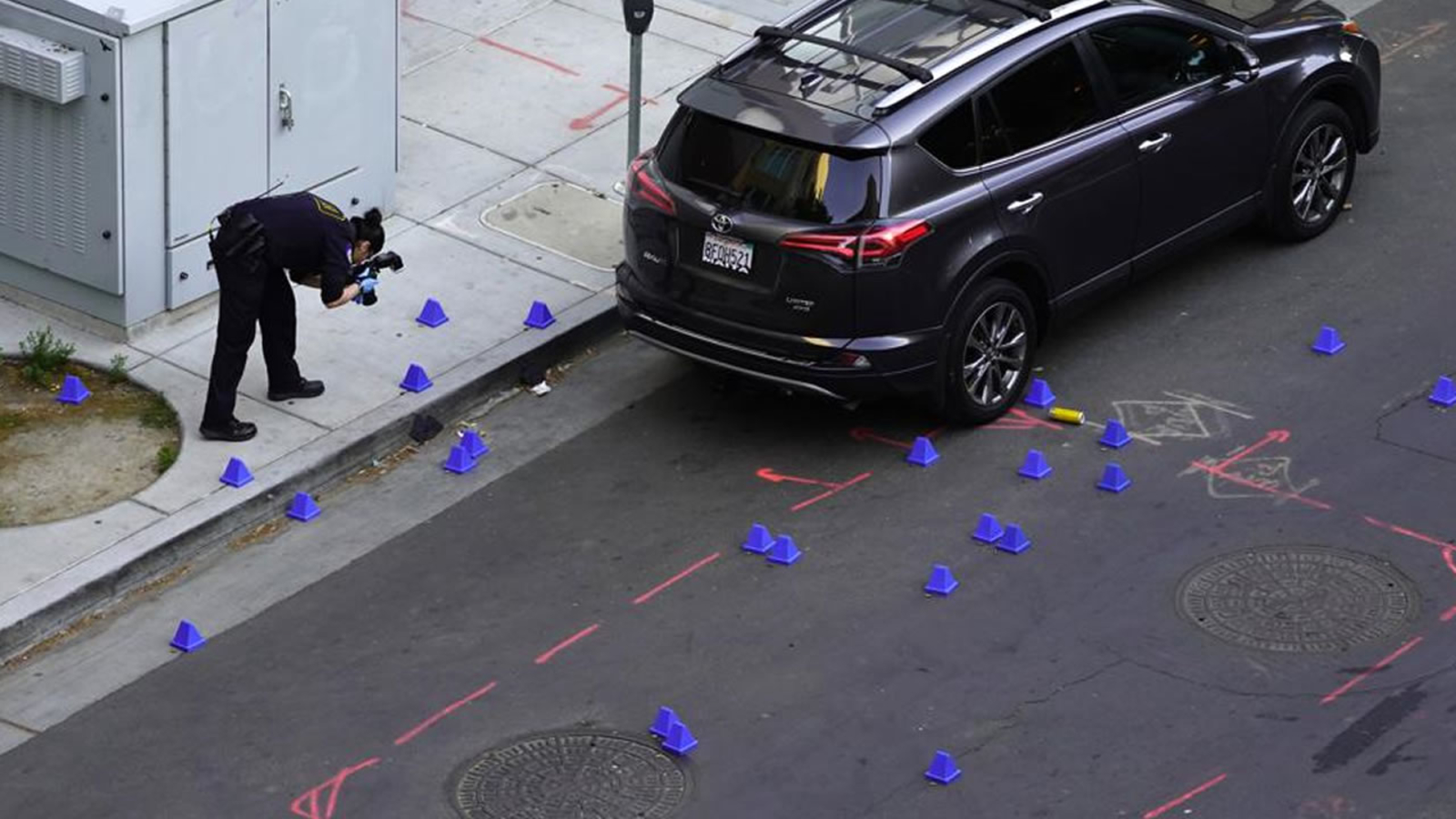 He was taken to the hospital for treatment but is expected to recover.

Officials say they identified Martin as a “person of interest” in the shooting. Detectives arrested Martin on Tuesday morning.

He remains at the hospital but will be taken to the Sacramento County jail once released on weapons charges.

Police say Martin is the brother of 26-year-old Dandrae Martin, who was arrested Monday as a “related suspect” on charges of assault with a deadly weapon and being a convict carrying a loaded gun.

THIS IS A BREAKING NEWS UPDATE. PREVIOUS STORY BELOW.

Sacramento police arrested a man Monday connected to the shooting that killed six people and wounded a dozen others in the heart of California’s capital as at least two shooters fired more than 100 rapid-fire rounds and people ran for their lives.

Police said they booked Dandrae Martin, 26, as a “related suspect” on charges of assault with a deadly weapon and being a convict carrying a loaded gun. Detectives and SWAT team members found one handgun during searches of three homes in the area.

The arrest came as the six victims killed were identified in the shooting that occurred Sunday at about 2 a.m. as bars were closing and patrons filled the streets near the state Capitol.

The burst of gunshots sent people running in terror in the neighborhood just a few blocks from Golden One Arena, where the NBA’s Sacramento Kings held a moment of silence for the victims before their game Sunday night.

Detectives were trying to determine if a stolen handgun found at the crime scene was connected to the shooting, Police Chief Kathy Lester said. Witnesses answered her plea for help by providing more than 100 videos and photos of evidence.

“The scale of violence that just happened in our city is unprecedented during my 27 years here,” Lester told reporters. “We are shocked and heartbroken by this tragedy.”

“The investigation is highly complex involving many witnesses, videos of numerous types and significant physical evidence,” Schubert said in a statement. “This is an ongoing investigation and we anticipate more arrests in this case.”

Martin was held without bail and was scheduled to appear in Sacramento County Superior Court on Tuesday, according to jail records.

Martin was freed from an Arizona prison in 2020 after serving just over 1 1/2 years for violating probation in separate cases involving a felony conviction for aggravated assault in 2016 and a conviction on a marijuana charge in 2018.

He was also wanted on a misdemeanor warrant by the Riverside County Sheriff’s Department in Southern California.

It was not immediately clear whether Martin had an attorney who could speak on his behalf.

Of the 12 wounded, at least four suffered critical injuries, the Sacramento Fire Department said. At least seven of the victims had been released from hospitals by Monday.

At the scene where the chaos erupted, streets were reopened Monday and police tape had been removed.

On sidewalks where video had shown victims writhing in pain, memorials began to grow with candles, balloons, flowers and stuffed animals paying tribute to the lives lost. One balloon had a message on it saying in part: “You will forever be in our hearts and thoughts. Nothing will ever be the same.”

Politicians decried the violence, and some Democrats, including President Joe Biden, called for tougher action against gun violence.

California has some of the nation’s toughest restrictions on firearms, requiring background checks to buy guns and ammunition, limiting magazines to 10 bullets, and banning firearms that fall into its definition of assault weapons.

But state lawmakers plan to go further. A bill getting its first hearing Tuesday would allow citizens to sue those who possess illegal weapons, a measure patterned after a controversial Texas bill aimed at abortions.

Other proposed California legislation this year would make it easier for people to sue gun companies and target unregistered “ghost guns.”

The gunfire erupted just after a fight broke out on a street lined with an upscale hotel, nightclubs and bars. Police said they were investigating whether the altercation was connected to the shooting. Video from witnesses posted on social media showed rapid gunfire for at least 45 seconds as people screamed and ran for cover.

The shots startled sleeping guests at the Citizen Hotel, which included a wedding party and fans of the rapper Tyler the Creator, who performed at a concert hours earlier.

From her window on the fourth floor of the hotel, 18-year-old Kelsey Schar said she saw a man running while firing a gun. She could see flashes from the weapon in the darkness as people ran for cover.

Schar’s friend, Madalyn Woodward, said she saw a girl who appeared to have been shot in the arm lying on the ground. Security guards from a nearby nightclub rushed to help the girl with what looked like napkins to try to stanch the bleeding.

Sunday’s violence was the third time in the U.S. this year that at least six people have been killed in a mass shooting, according to a database compiled by The Associated Press, USA Today and Northeastern University. And it was the second mass shooting in Sacramento in the last five weeks.

On Feb. 28, a father killed his three daughters, a chaperone and himself in a Sacramento church during a weekly supervised visitation. David Mora, 39, was armed with a homemade semiautomatic rifle-style weapon, even though he was under a restraining order that prohibited him from possessing a firearm.

The crime scene Sunday sprawled across two city blocks, closing off a large swath of the city’s downtown. Bodies remained on the pavement throughout the day as Lester said investigators worked to process a “really complex and complicated scene” to make sure investigators gathered all the evidence they could to “see the perpetrators of this crime brought to justice.”

This story has corrected the spelling of suspects’ first names to Dandrae, not Dandre; and De’vazia , not Devazia.