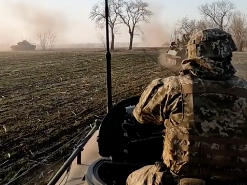 Early one morning last month in an undisclosed area of Ukraine, Canadian infantry veteran Hrulf headed off for what he thought would be a briefing with Ukrainian officers.

The host soldiers had already warned him an attack to liberate a Russian-occupied village was to be launched some time that day.

But almost immediately Hrulf — a nom-de-guerre he uses for security reasons — found himself climbing onto the command vehicle and heading straight into a pitched battle against Russian and Chechen troops.

Within minutes, two of the Ukrainian vehicles were in flames as shrapnel from a wall of artillery fire whizzed by and Russian planes swooped low over the battlefield to bomb the attackers.

It was the maiden combat operation for members of the Norman Brigade — the volunteer unit Quebec-native Hrulf commands — and might mark the first time any Canadians have seen action in Ukraine.

And it was an eye opener. Hrulf said he and his troops — a mix of Canadians, Americans, Brits and Europeans — have all had experience fighting insurgents in such places as Afghanistan. Combat in Ukraine against a modern army is something totally different, he stressed in a video call from the unit’s base camp.

“The intensity of this conflict f—ing voids everything we know,” Hrulf said, a scarf covering most of his face, the brigade flag hanging behind him. “What makes it a living hell is the actual artillery and the sheer amount of anti-tank weapons that are being used … and the extensive use of tanks and armoured vehicles and aviation.”

Hours later, and after the Canadian had neutralized a Russian infantry vehicle with a well-aimed rocket-propelled grenade, they took control of the village.

Hrulf spoke on the condition the National Post not reveal where the battle took place nor any information that could identify the brigade members, measures he said were necessary for operational and personal safety.

The Post could not independently verify details of the operation on March 26. But the brigade posted videos taken during the battle on its Facebook page that align with Hrulf’s account.

In an interview from the war zone, he also described how Ukrainians have embraced such foreign volunteer soldiers, and related unconfirmed new accounts of Russian atrocities.

Hundreds of Canadians have travelled to Ukraine to help fend off the invasion as part of the freshly formed International Legion for the Territorial Defence of Ukraine. The legion has said that about 550 fighters from Canada formed another unit, the Canadian Ukrainian Brigade.

The name of Hrulf’s unit alludes to the fact many Quebecers are descendants of settlers from France’s Normandy region. Its members are almost entirely military veterans, who either have family in Ukraine or are appalled by the invasion and reports of alleged Russian war crimes, he said.

It’s unclear to what extent such foreigners will make a tangible difference in the war, but Hrulf said they seem to at least be a morale-booster for Ukraine’s military and civilians.

“I’ve seen old women just crying and blessing us and kissing us,” he said. “It’s something you do not forget, because in previous campaigns — all the guys can confirm it — it’s all the same narrative. They hated us, they didn’t want us there. But here, they want us.”

In previous campaigns, they hated us, they didn’t want us there. But here, they want us

Hrulf, commander of the Norman Brigade

The intensity of combat in Ukraine — and the deadly environment many Canadians are rushing toward — became apparent 10 minutes into last month’s attack, as two of the Ukrainians’ armoured vehicles were hit. The Ukrainian commander jumped off the troop carrier he shared with Hrulf and raced across the battlefield, managing to pull one crew member free of a burning vehicle.

The soldier was “bleeding profusely” from shrapnel wounds but the Ukrainians had only a piece of cloth to tend to him. Hrulf had an extra tourniquet and they used it to stanch the hemorrhaging as the group began taking small-arms fire. Moments later, the injured soldier called out to the Canadian, pointing to his neck, which turned out to also have been punctured by a piece of shrapnel. Miraculously, the burning metal appeared to have cauterized the wound and it wasn’t bleeding, said Hrulf.

Another of the Ukrainians was not so lucky. Hrulf saw a hunk of shrapnel smash into the back of his head, killing him instantly.

The Ukrainian commanding officer himself suffered a concussion as shells exploded around them, but kept leading his men, “puking and running at the same time,” said Hrulf. “It was inspiring.”

Entering the village finally, the attacking soldiers noticed a Russian BTR infantry vehicle firing “hard” at another group of Ukrainians with its 30 mm cannon. Hrulf said he aimed an RPG-22 — a Soviet-designed anti-tank rocket launcher — at the armoured car and hit the turret with deadly effect.

“After that round, it shut up and just scrambled away,” he said. “That commander and that gunner (inside the BTR) didn’t have any chance that day.”

The Canadian sniper Hrulf had brought with him helped care for a civilian who had been injured by Russian shelling, hooking him up to an IV bag, also depicted in one of the brigade’s videos.

A day after the attack Hrulf took part in, the Russians re-occupied the same village and forced several of the civilian residents across the border, he said. If true, it would jibe with numerous other reports of Ukrainian civilians being deported into Russia.

Hrulf stressed that he and his colleagues are there only to help, are taking no salaries and have paid their own expenses. But they do appreciate donations to help fund medical supplies and the like, with various options on the brigade’s Facebook page for making contributions. This being warfare in the 21st century, there are even Norman Brigade t-shirts for sale.

He said he slept 13 hours after that exhausting, hairy day of battle, and realizes there were times when he could have been killed. But the Quebecer said he has “absolutely zero” regrets about coming to Ukraine to fight.

“I’m here for good reasons,” said Hrulf. “In the end I don’t care if I die. If I die I die, but … I’ll die content, knowing that we’re stopping this evil thing. It’s not normal what’s going on.”