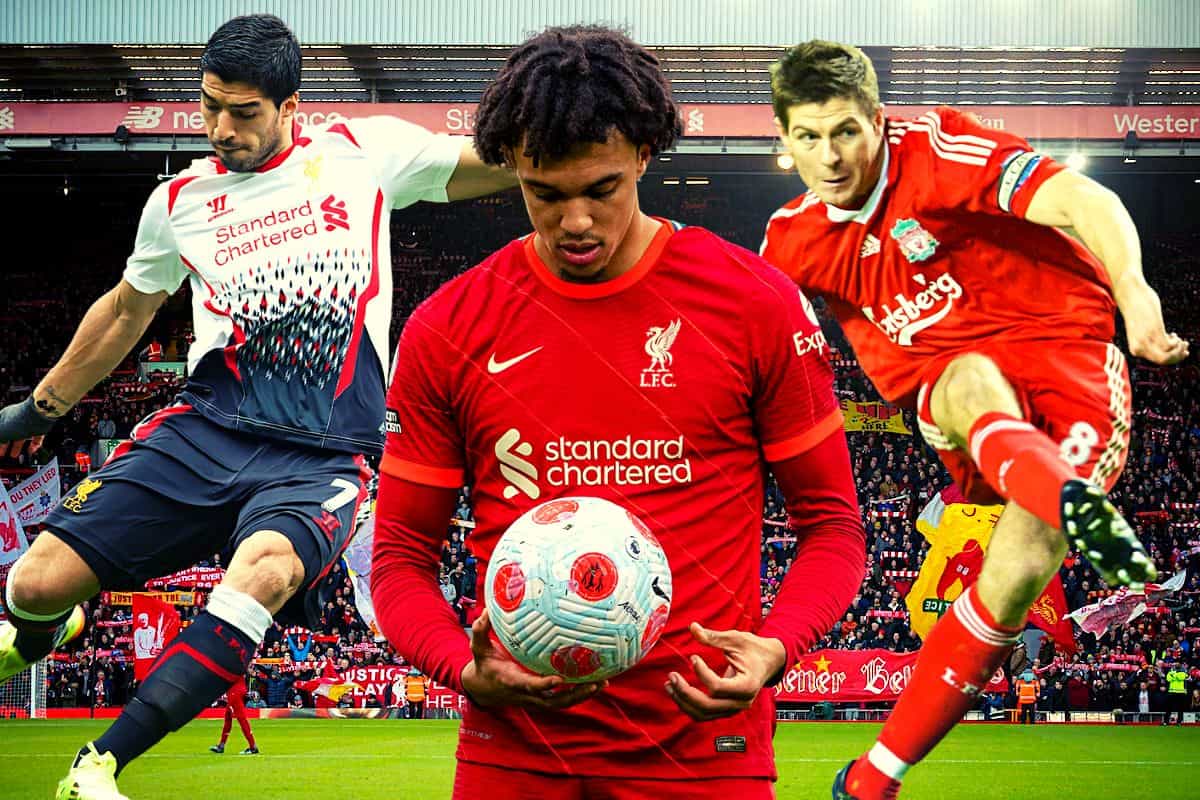 Who are the best free-kick takers in Liverpool’s history and why? Here, we rank our top 10.

The anticipation, the hush around the stadium, the noise as the ball is struck and the pandemonium when it flies into the net.

Is there a better way to score a goal than to score from a free-kick? Possibly not.

Over the years, as Liverpool fans, we’ve been treated to some truly memorable free-kick goals.

Several dead ball specialists have graced the red shirt, players you just know have every chance of scoring as soon as they step up.

Here, we rank our top 10 Liverpool free-kick takers of all-time.

As things stand, Smith has scored the third-highest amount of free-kicks (6) than any other player in Liverpool’s history, not bad for a centre half!

The former Reds captain earned the nickname of the ‘Anfield Iron’ due to his uncompromising style as a defender for his hometown club.

But when it came to free-kicks, he was always a threat, just as he was from the penalty spot, where he scored 22 goals across his 15 years at the club.

When you think Murphy and free-kicks, you think about that one he bent in at Old Trafford in December 2000.

That was one of four he scored for the Reds, with his others coming against Birmingham and Aston Villa in 2002, and Leeds in 2003.

For Murphy, free-kicks were less about power and more about placement and precision.

We’ll never forget that Gary Mac free-kick away at Everton.

But it’s worth nothing that he then went on to score two more in the next three weeks!

Seriously, though, that Goodison effort never gets old, does it?

Case scored four free-kicks in the space of just over two years for the Reds, at a time when footballs were certainly heavier and less aerodynamic than they are now!

A tough-tackling midfielder, Case became known for his powerful shooting, something he was able to use to his advantage from dead ball situations.

To date, Alexander-Arnold has scored four free-kicks for Liverpool, with the record set at 10. There’s every chance he will eventually eclipse that.

A right-back with fantastic technical ability, Trent is just as much of a threat from indirect free-kicks than he is from direct ones.

The right foot of dreams.

Brazilian Coutinho scored five free-kicks for Liverpool, all of which came in his final couple of years with the club, before his move to Barcelona.

Having played alongside Steven Gerrard and Luis Suarez for several years, the ‘little magician’ often found it difficult to get a look in from set pieces.

But when he was allowed to step up, he was a huge threat, with his long ranger at Arsenal probably the pick of the bunch.

Had Aurelio avoided some of the horrible injuries that thwarted much of his Liverpool career, he’d likely have scored more free-kicks than the three he managed in 2009.

His most memorable effort came in the stunning 4-1 win at Old Trafford that year, curling a beauty past Edwin van der Sar in the second half.

His clever strike against Chelsea one month later was just as impressive. What a left foot.

Gerrard is the player to have scored the most free-kicks (10) in Liverpool’s history.

Stevie stepped up when it mattered.

Barnes scored five free kicks in less than two years for the Reds between 1988 and 1990.

His delicious left-footed curler against Arsenal was arguably the best of the bunch.

“In his prime a free kick close to the box was as good as a pen.”

There was a stage in Luis Suarez’s career when you just knew his free-kicks were ending up in the back of the net.

With eight free-kick goals between August 2012 and January 2014, nobody else in Liverpool’s history has been as consistent with direct dead ball situations.

He scored five alone in the 2012/13 season, including two against Zenit in the Europa League. What a talent.

“Suarez was a magician with the ball, scored eight in an era of several players taking free-kicks.”