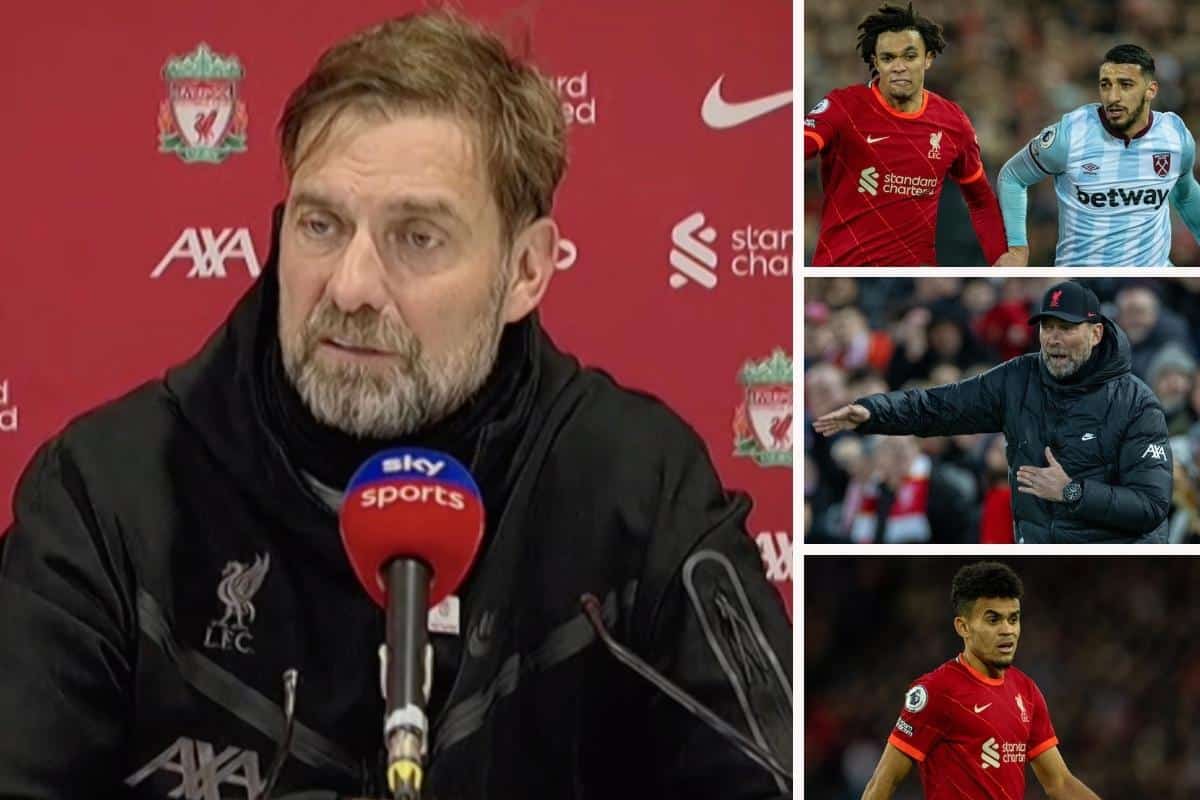 Jurgen Klopp gave a mixed review of Liverpool’s performance as they beat West Ham 1-0 at Anfield, but was full of praise for his side’s last-ditch defending.

Though Liverpool emerged with the three points, that was far from a foregone conclusion over the course of 95 minutes, with the Reds needing the dig deep to seal a result.

Trent Alexander-Arnold, Andy Robertson, Ibrahima Konate and Naby Keita were all required to make late interventions – which Klopp insisted was “like scoring a goal.”

“All these situations were, for me, like scoring a goal, to be honest. Inside, it’s exactly the same importance for me,” he said.

“If the organisation is wrong for the moment, it doesn’t mean you can’t defend the situation.

“You just have to do it in a different way – and we did that here quite well.”

Evolving the attack was “necessary”

While Saturday saw both Sadio Mane and Mohamed Salah start, there is a clear shift in emphasis when it comes to Liverpool’s attack with new faces being brought in.

Ahead of a summer that sees Mane, Salah and Roberto Firmino all enter the final year of their contract, Klopp has described this injection of new talent as “necessary” as he establishes “proper quality in depth.”

“It was necessary [to sign Diogo Jota and Luis Diaz]. We cannot rely [solely] on these boys,” he said.

“And we have, on top of that, Divock Origi and Taki Minamino. We had Shaqiri here, so all brilliant players who helped us, obviously, to win the things we won in the past.

“But obviously we need to bring in quality and fresh energy, and that’s what we tried.

“And it looks like it worked out, we now have proper quality in depth.”

No issues with Trent’s defending

Alexander-Arnold produced his 16th assist of the season for Mane’s winner, and in doing so, broke his own record for most in a single campaign.

But he was also required at the other end, most notably with a goal-line clearance following Pablo Fornals’ lob, with Klopp defying criticism of his right-back’s defensive work.

“If he couldn’t defend he wouldn’t play, especially not in that position,” he explained.

“His defending is not a problem we have.”