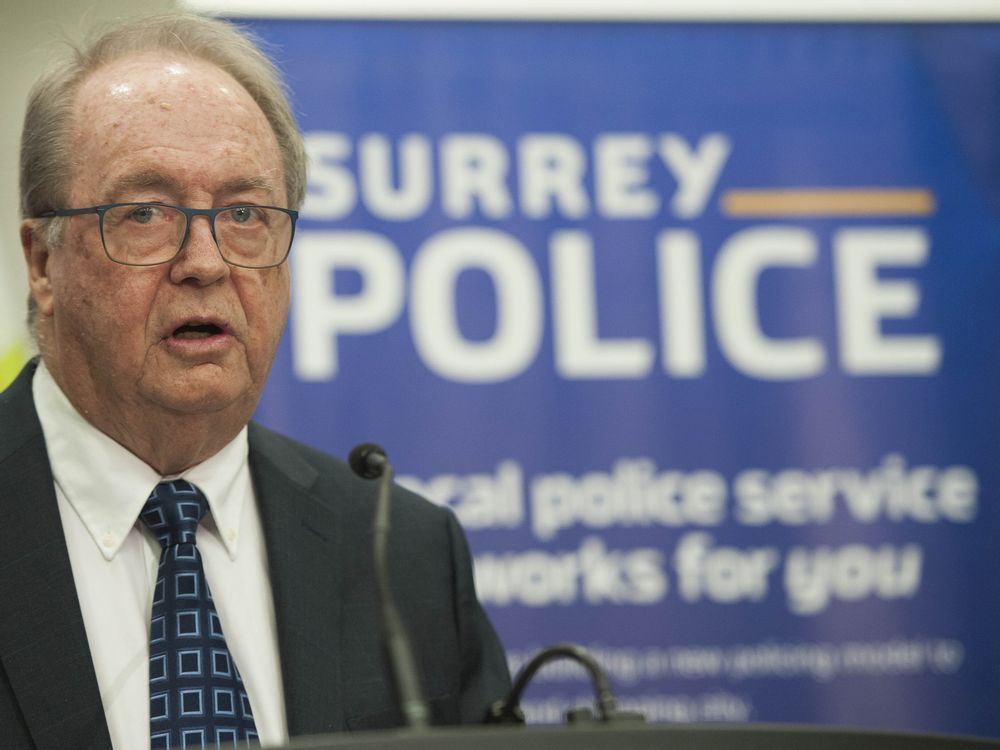 The rancour over Surrey’s shift to a municipal police department — which reached a boiling point with a criminal charge against the mayor — will be the central issue of the mayoral race in one of B.C.’s fastest-growing cities, turning former allies into foes and pitting old political rivals against each other.

Mayor Doug McCallum, running for a second term under the Safe Surrey Coalition, is dogged by his criminal trial for public mischief, set for Oct. 31, two weeks after the Oct. 15 election.

The charge stems from a September dispute in a Surrey parking lot with opponents of his plan to ditch the RCMP.

McCallum, 78, has rejected calls he step aside until the trial. It has led to raucous council meetings as opponents challenge his legitimacy as mayor, prompting McCallum to threaten to bring in the RCMP to keep order.

Surrey Connect Councillor Brenda Locke, who announced in July she would challenge her former political ally for mayor, said McCallum’s refusal to step aside has created a distraction.

“I think he is a distraction to what’s going on at City Hall,” said Locke, 66, a former B.C. Liberal MLA. “This is about the integrity of the office. And the fact that he won’t step aside when you’re facing charges like that, it’s just completely inappropriate.

Locke is running on a promise to reverse the transition to the Surrey Police Service, which she called a “failed experiment” and “colossal waste of money.”

McCallum said the Surrey Police Service has 85 officers on the streets, and that will rise to 300 officers by the middle of next year. “So the police is well advanced. It can’t be turned around,” he said.

Surrey Coun. Linda Annis, the only city councillor elected in 2018 who didn’t run with McCallum’s Safe Surrey Coalition, said she is running for re-election as a Surrey First councillor but has not yet decided whether to run for mayor.

Annis said the fuss over the mayor’s criminal case has taken focus away from important issues such as public safety, transportation infrastructure and affordable housing.

“We’ve got so much potential in Surrey that we’re not realizing yet,” he said Sunday, adding that he’ll make his decision soon.

Hogg, 75, was White Rock mayor from 1984 to 1993 before moving to provincial politics where he represented the Surrey–White Rock riding for the B.C. Liberals from 1997 to 2013. Hogg was elected member of Parliament for White Rock–South Surrey under the Liberals in 2017 before losing to Conservative MP Kerry-Lynne Findlay in 2019 and again last year.

Jinny Sims, NDP MLA for Surrey–Panorama since 2017, is rumoured to be announcing her candidacy on Wednesday, during a launch party for a new political party Surrey Forward.

That would revive the political rivalry between Dhaliwal, 61, and Sims, 69, who faced off during two federal elections.

In 2015, Dhaliwal beat Sims in the newly-formed riding of Surrey–Newton and he’s represented that riding for three terms.

“I find it kind of rich that two people that have said nothing about the behaviour of this mayor over the past almost three years and eight months … that they want to run now,” Locke said.

Gerald Baier, a political scientist at the University of British Columbia, said even with the legal troubles facing McCallum, he has the most name recognition in a crowded field.

“That kind of controversy sort of suggests that there’s no bad press,” he said.

McCallum delivered on his two major promises of the 2018 campaign, Baier said, which is to bring in a municipal police force and push for a Surrey SkyTrain over light trail transit.

Baier’s not surprised to see former MLAs and MPs put their names forward since Surrey has proved to be a battleground in both the provincial and federal landscape.