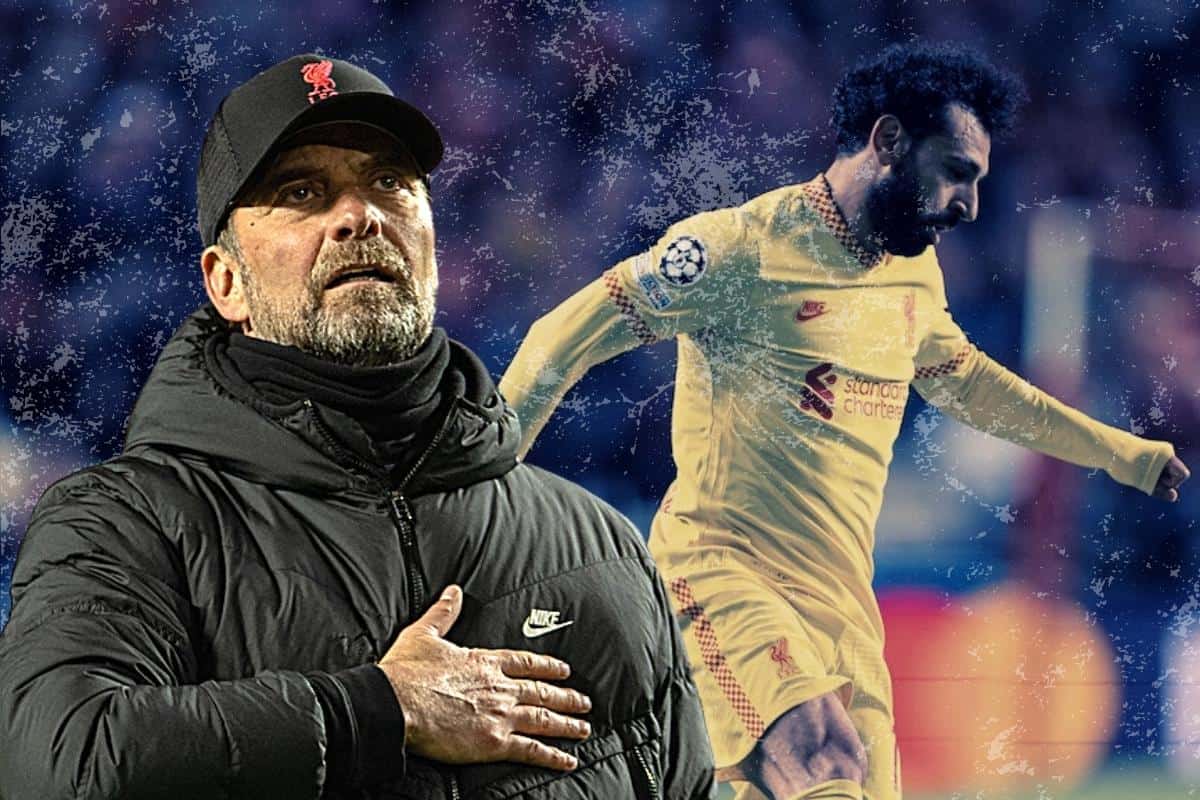 Future speculation is just that, Liverpool need to live the now and Jurgen Klopp‘s task is ensuring Mohamed Salah is one Red doing just that, writes Steven Scragg.

Tuesday night offered a comfortable outcome against Benfica, from a game that Liverpool both dominated and threw wide open again, before boxing off once more towards the end.

While Jurgen Klopp’s team have one foot in the Champions League semi-final, the Liverpool manager is indulging in straight-talking.

Klopp could play the footballing politician, but it simply isn’t his style. Ask the Liverpool manager a stupid question and you will receive a withering response and looks that will kill, but if you engage him in intelligent conversation, you will get a candid, informed, and often humorous reply.

Within the slipstream of Liverpool’s Champions League, quarter-final first leg victory over Benfica, Klopp was open enough to concede that Mohamed Salah is struggling within himself.

It’s nothing we didn’t already know, but in textbook managerial terms Klopp would have been well within his rights to deflect the conversation elsewhere, or to suggest everything is awesome for his Egyptian genius, and that top form is just around the corner once more. You never know, it might be, yet Klopp is not up for making unsubstantiated promises.

Instead, Klopp talked of “all the stories” and of a “tough period” for the man who has been the provider of so much that is glorious about modern-day Liverpool.

In Lisbon, Salah missed a golden opportunity to put Liverpool 3-0 up before halftime and within five minutes of the restart for the second half, the game had a very different complexion after Darwin Núñez had shortened Benfica’s arrears.

Salah was replaced just beyond the hour, as was Sadio Mane and Thiago, as Klopp looked to give the home team alternative issues to think about. Part of this decision would have been with Sunday’s trip to Manchester City in mind, and you could argue that the ploy worked.

Once upon a time, hooking Salah after an hour of a Champions League quarter-final would have been unthinkable.

We rightly concern ourselves with the outcome of Salah’s contract standoff, but to be brutal, we no longer have the need to be beholden to one player, and ironically Salah has made a bigger contribution to that collective status than any other member of Klopp’s squad.

Beware. If you help make something better than what it was, then you too will automatically become of less individual value as the collective grows in strength, I’m looking at you Bobby Firmino. The irreplaceable suddenly becomes replaceable. See Bob Paisley’s Liverpool for evidence of this.

Ultimately, Salah might well stay, but it needs to be under the terms and conditions of the good of the collective. How many zeros need to be on the end of his wage is merely shadow puppetry compared to what role he will play. The 2022 to 2026 Salah will undoubtedly be a subtly different entity compared to the 2017 to 2022 version, should he remain at the club.

Better off with Salah, we will cope should he move on. Either way, we should be forever thankful for his contribution to the joys we have experienced across the last five years.

Conversely, Klopp himself is another matter entirely; with two years left on his own contract, when it comes to the prospect of filling footballing voids, the Liverpool manager will surely be an impossible act to follow.

It was outside a Lisbon café where Klopp received confirmation of the offer to become the manager of Liverpool during the early months of what was meant to be a year-long sabbatical from the game, and there was clearly a sense of joy for him in being back there.

One of the greatest things about Klopp is his awareness of not only himself but of what surrounds him. He constantly touches base with reality and insists that those he works with do likewise. It’s possibly why he never seems to blink when players opt for pastures new.

Klopp’s response to Philippe Coutinho agitating his way to Barcelona was to funnel the transfer fee into the areas of his team that needed it the most, while when agreements over new contracts could not be reached with Emre Can and Gini Wijnaldum, he waved them off and wished them the very best of luck.

If a player is no longer on board, for whatever reason, there is no genuine benefit in them staying. Klopp grounds his decision making in common sense, and you can see that there is no club better suited to his vision and personality. He himself has stated the two are perfectly suited.

While there was nothing particularly new to be learned in BT Sport’s excellent documentary The Boot Room Boys, which was on directly after Tuesday night’s game, it was a timely reminder that Liverpool is a club that was built upon the foundations of a similar, almost identical ethos to the one which Klopp works to.

Klopp really will feel irreplaceable. Of course, this was thought of Bill Shankly when he departed the club unexpectedly and along came another brand of brilliance under Paisley, but do we really have a contemporary version of him at Anfield?

You can’t stop change as it will eventually force itself upon us, so living in the now is massively important, and the trick for Klopp is convincing Salah of living the now as the biggest game of the season lumbers upon the horizon. Eastlands will be the ideal place for everything to click into gear for him once more.