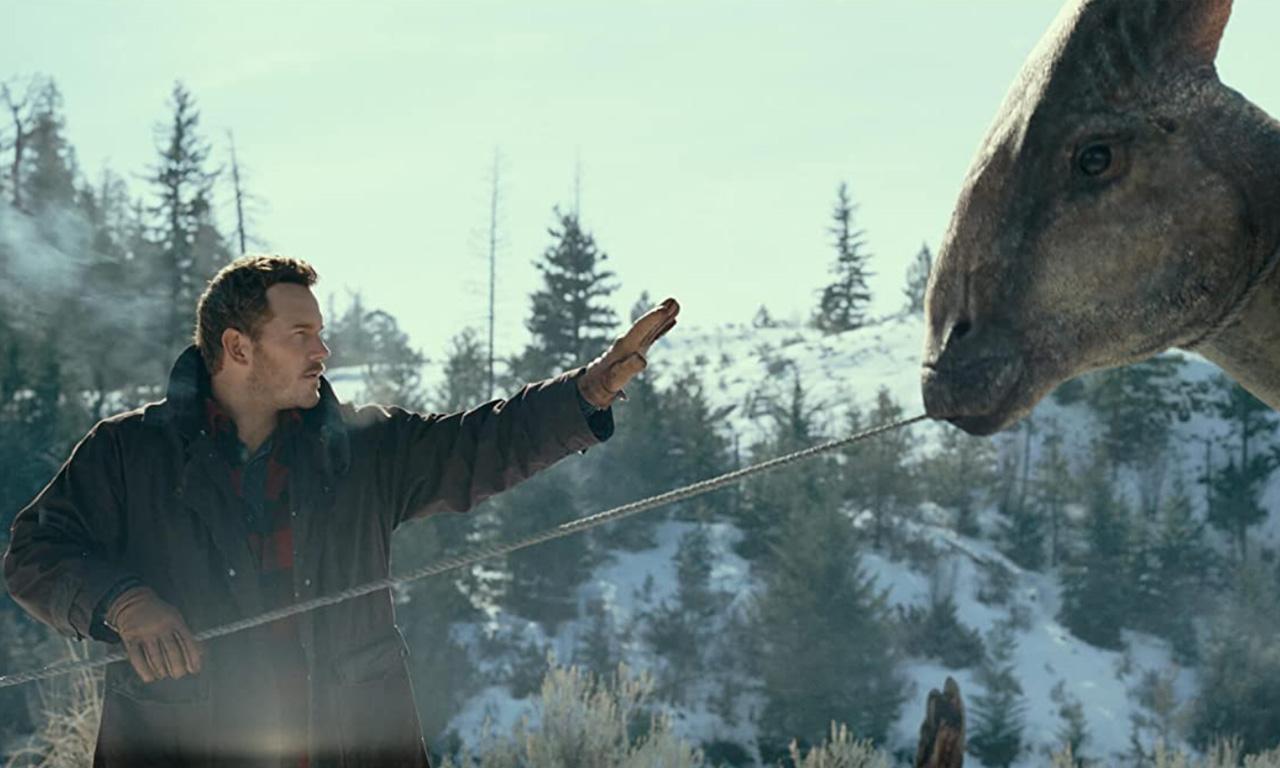 Several years after the events of ‘Jurassic World Fallen Kingdom’, a locust infestation is beginning to ravage the world’s food supply and threaten extinction for mankind. Dinosaurs are now being rehoused in an enclosure in the Dolomites by BioSyn, a massive conglomerate that is somehow linked to the locust infestation…

If ever there was a movie franchise that never should have been, ‘Jurassic Park’ is that.

The movie was Spielberg’s blockbuster pinnacle of the ’90s. It was wondrous, spectacular, fascinating, wryly funny. It married spectacle with suspicion in a way that the franchise has been trying to replicate ever since. ‘Jurassic World’ came close. It had the same sense of sly humour, imaging a world where people are effectively dulled to the amazement of dinosaurs living again and needing bigger and more dangerous creatures. ‘Fallen Kingdom’, its follow-up, was a mish-mash of some of these ideas and incorporated a dizzyingly poor subplot about human cloning. Fast forward to 2022 and ‘Dominion’ is a hodge-podge mixture of about ten different blockbusters since the new millennium.

There’s an extended sequence in Malta that’s copied nearly shot-for-shot from ‘The Bourne Ultimatum’, with a raptor making the same rooftop-window jump. Earlier in that sequence, you have Chris Pratt driving a motorcycle through the tourist traps while dinosaurs run amok. All of this should be exciting and thrilling, yet ‘Dominion’ is so overloaded with trying to keep the plates spinning that nothing has a chance to settle. Moreover, it’s painfully clear that the movie went through at least a dozen rewrites and half-formed strands still exist everywhere, leaving the story just incoherent and indecipherable half the time. No doubt there was an entire script written for the original cast that was then folded into whatever was written with Chris Pratt and Bryce Dallas Howard in mind. On top of that, they’ve also got to include obscure minor characters – does anyone remember Dodgson from ‘Jurassic Park’, for example? – and new characters like DeWanda Wise‘s hot-shot pilot who looks like she walked off the set of a Disney+ ‘Star Wars’ show.

It’s hard to know exactly who to lay the blame for the utter shitshow that is ‘Jurassic World Dominion’. Clearly, Colin Trevorrow’s feckless attempts at concluding the franchise involve firing everything at the screen and seeing what works, but what’s galling is that it doesn’t need half of them. For example, how can you have a movie about dinosaurs and be so uninterested in dinosaurs? They’re littered about the place, but the core of the movie is about a locust infestation that was created by an evil billionaire who looks like Tim Cook. Why would you try to crowbar in a whole subplot about human cloning as well? Why would you pull together a huge cast and spend two-thirds of a movie two and a half hours long and keep them apart? Just to bring them together for no good reason?

The CGI throughout ‘Jurassic World Dominion’ feels lifeless and flat, the complete opposite of what we all saw in ‘Jurassic Park‘ so many years ago. Indeed, Trevorrow’s direction doesn’t seem to capture any of the wide-eyed mystery of it all because nobody seems interested in them. There’s a moment, towards the start of the movie, where a long-necked dinosaur wanders aimlessly into a snow-flecked construction site and everyone on screen seems mildly inconvenienced than taken in rapt wonder. Towards the end of the movie, Jeff Goldblum’s leather-bound chaos mathematician confronts the evil billionaire and holds up a paper dinosaur to him, telling him that he’s taken people’s fascination and squandered it to make money. The billionaire shrugs and waves him off, telling him people see what they like. Never has a movie been so uninterested in itself as ‘Jurassic World Dominion’ is. At least with ‘The Matrix Resurrections‘, Lana Wachowski took part in some full-blown castigating and malicious compliance with her corporate overlords. Here, everyone’s just punching in and out of work.

In the end, ‘Jurassic World Dominion’ closes out the franchise in such a feeble manner that it reminds us why it never should have existed in the first place. There was nowhere really for it to go. Once you show the world dinosaurs, it’s looking for the next thing. In ‘Jurassic World’, the premise was the world was jaded by dinosaurs. In ‘Dominion’, they’re just a nuisance. If the people on screen can’t possibly care about dinosaurs, how can anyone in the audience be expected to either? How do you manage to squander the prospect of dinosaurs rampaging across the planet so unappealing?