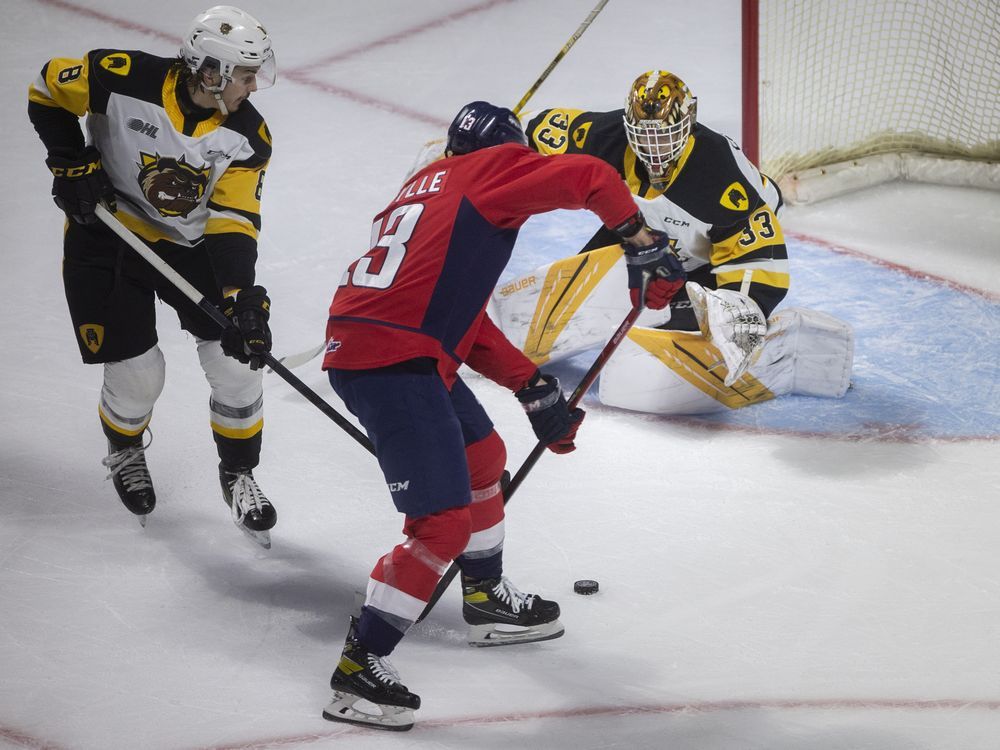 The Windsor Spitfires provide an offensive challenge the Hamilton Bulldogs have yet to face this season.

Hamilton, which built the best regular-season record in the Ontario Hockey League, rolled through the Eastern Conference playoffs with 12-straight wins and yielded just four goals in one of those games.

For the third-straight game, the Spitfires, who had the league’s No. 1-ranked offence, hit four goals and more important turned that offensive output into a win on Monday.

Behind a two-goal performance from OHL scoring champion Wyatt Johnston and Alex Christopoulos, the Spitfires beat the Bulldogs 6-3 before a crowd of 4,970 at the WFCU Centre.

“It’s amazing when you believe,” Spitfires’ head coach Marc Savard said. “I can just see it in the room. We dig in, we work and we play the right way.”

With it, the Spitfires now lead the best-of-seven OHL final 2-1. Game 4 is Friday at the WFCU Centre at 7 p.m.

Monday’s match was Windsor’s fifth game in the last seven days and 10th in 17 days with the club rallying to win a seventh and deciding game against Flint in the Western Conference final.

Along with being back on home ice Monday, the Spitfires also saw goalie Matt Onuska return to the starting role on after Xavier Medina had stepped in and performed well after he was injured in Game 5 against Flint.

“A lot of games in a row, X (Medina) was fantastic, but I’ve always been of the old adage that (when) a goalie gets hurt, he was our No. 1 guy for a while,” Savard said. “I wanted to give Onuska another opportunity to go in the net and he answered the bell.

It was a shaky start for the Spitfires, who fell behind midway through the opening period on Logan Morrison goal.

Windsor responded with a pair of goals to take a 2-1 lead in the final minute of the period. Christopoulos pulled the Spitfires even and, after Hamilton could not convert on a scramble in front of Onuska, Pasquale Zito won a race for a loose puck and hit Johnston alone in the slot.

It marked just the third time in this series that Windsor had held a lead with the first coming on Michael Renwick’s overtime winner in the opener and the other early in Game 2 on Sunday on a Louka Henault power-play goal.

However, the Spitfires could not take the lead to the dressing room. Unable to clear the puck at the blue line, Ryan Winterton’s floater from the point eluded Onuska and got the Bulldogs even at 2-2 after 20 minutes despite being outshot 11-4.

Onuska found his form in the second period and turned aside all 13 shots he faced in the period and the Spitfires regained the lead on Johnston’s second of the game. Jacob Maillet followed by tipping a point shot by Nicholas De Angelis in to give Windsor a 4-2 lead after 40 minutes.

“After that first, we made what were some uncharacteristic mistakes for our team,” Bulldogs’ head coach Jay McKee said. “Just a couple of small mistakes that (the Spitfires) capitalized on and they have that ability, that’s part of the reason they’re at this point here in the season.”

For the Spitfires, the Maillet goal marked the first time in this series that the Spitfires have enjoyed a multi-goal lead.

In fact, for most of the first two games of the series, the Spitfires often found themselves trying to claw back into the game.

“I think we’re all really confident with the lead,” Johnston said. “Biggest thing is coming out early, getting the lead and holding them off.”

Onuska had to be sharp early in the third period as the Bulldogs fired the first six shots of the final period thanks to a power-play opportunity.

Shortly after killing off the penalty, Christopoulos extended the lead by putting home his own rebound to put the Spitfires up by three goals. It marked the first time in 15 playoffs games that goalie Marco Costantini and the Bulldogs have allowed five goals.

“I think we’re still yet to see the best version of the Hamilton Bulldogs yet,” McKee said.

Mason McTavish scored on a Hamilton power play to cut the Windsor lead to two goals once again with just over nine minutes in regulation.

The Bulldogs got three of the team’s four power-play chance in the third period, which included one with 83 seconds left in regulation and the goalie pulled for a six-on-four advantage.

Onuska would not allow another, despite Windsor being outshot 38-32 at the final buzzer and 21-10 in the final period. Captain Will Cuylle hit the empty net with 24 seconds to play to close the scoring.

Forward Pasquale, who was hit in the eye in the series opener, returned to the lineup on Monday wearing a full face shield. He picked up an assist on Johnston’s first goal.

However, first-year forward Oliver Peer, who scored the tying goal in the series opener to force overtime, missed his second game in a row with a non-COVID-19 illness.

Meanwhile, the Bulldogs were without defenceman and captain Colton Kammerer, who suffered a leg injury in Sunday’s game.

That left the Bulldogs short two mainstays on the back end. Former Spitfire Nathan Staios, who was named the OHL defenceman of the year this season, has been out since the second round of the playoffs after taking a hit from behind. He took the pre-game skate on Monday, but did not play.