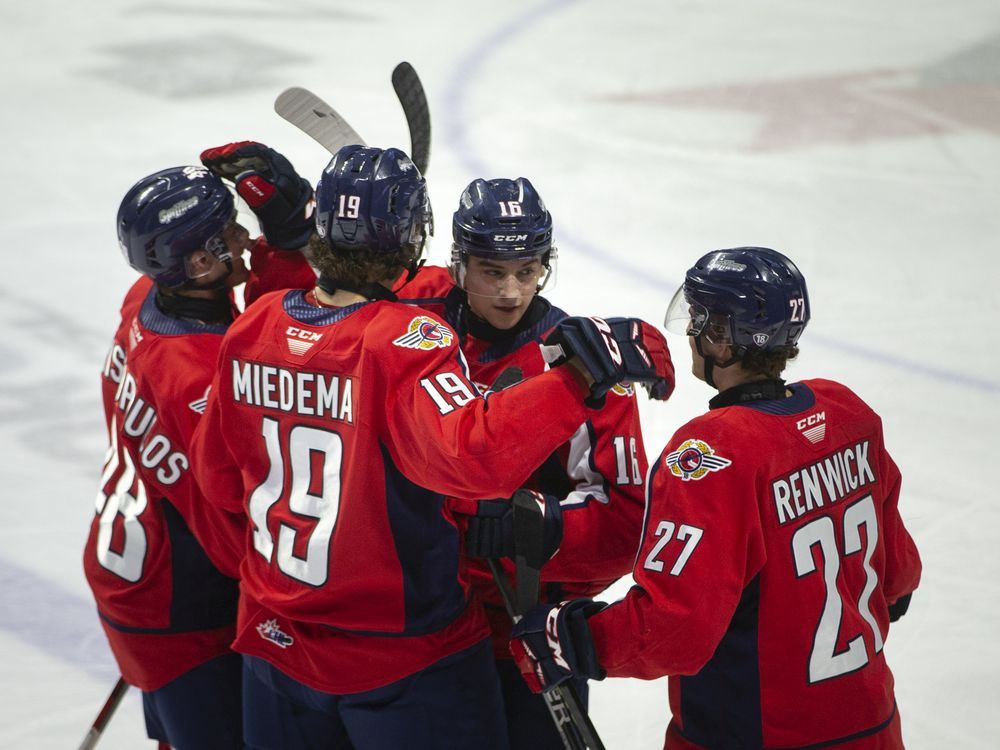 Against an opponent that has frustrated the Spitfires for much of the season, 19-year-old James Jodoin scored twice in the final seven minutes to spark Windsor to a 6-5 comeback win over the Kitchener Rangers before 2,739 at the WFCU Centre.

When a Kitchener defender slipped and fell, Jodoin was all alone at the Rangers’ blue line. A Nathan Ribau stretch pass sent him in alone to break a 4-4 tie.

“I had a feeling about him,” Spitfires’ head coach Marc Savard said. “He comes to work every day. Killer move, chipped it over the blocker.”

Jodoing may have been drafted as a defenceman, but the move showed a forward’s touch.

“I was tapping my stick on the ice and calling as hard as I could,” Jodoin said. “Ribau made a nice pass, I went down, faked going glove and chipped it back. It was a pretty sick move. I’ve done it in practice.”

Jodoin notched his third goal in two games with just over two minutes to play when an Andrew Perrott point shot went in off his shin pad. That proved to be the game-winning goal with a late goal by Kitchener’s Mike Petizian, with the goalie on the bench, making it a one-goal game.

“The coaches are gaining more confidence in my play as a new forward,” said Jodoin, who was a fourth-round pick by the Spitfires in 2019. “They’re seeing my potential for the opportunities like that and I took it and capitalized.”

It was a key win for the Spitfires against a Kitchener club that sits under .500 on the season, but had won four-of-five meetings against Windsor heading into Thursday’s game.

“We haven’t won too many,” Spitfires’ centre Wyatt Johnston said. “They play hard and they’re pretty dangerous in the offensive zone off the rush and their goalie’s been playing great. It was great to get the win.”

Defenceman Louka Henault, whose three assists give him six points in the last two games, made a perfect cross-ice feed to Jacob Maillet, who had an open net to get Windsor on the board first.

Reid Valade and Carson Rehkopf countered for the Rangers, but Perrott’s power-play goal pulled Windsor even after 20 minutes.

Valade scored a short-handed goal in the opening minute of the second period and Mitchell Martin put Kitchener up 4-2 and the Spitfires once again looked puzzled to find a way to solve the Rangers.

“It’s frustrating, especially when give up goal on power play, but we’ve come back from a lot of (deficits),” Johnston said. “We know it’s frustrating, but we knew we’d get back in the game.”

Johnston, who had two assists to retake the OHL scoring lead, helped get things started with an assist on a power-play goal by Pasquale Zito. Daniel D’Amico finished off a Henault play to tie the game just 24 seconds later.

“The guys stuck with it,” Savard said. “That’s the motto for our team. We’re physical and we never give up.”

Jodoin took care of the rest as the Spitfires picked up the team’s 11th point in the last six games and moved to within five points of first-place Flint in the West Division with three games in hand.

The Spitfires hit the road on Friday with a game in Guelph against the Storm. Game time is 7:30 p.m.