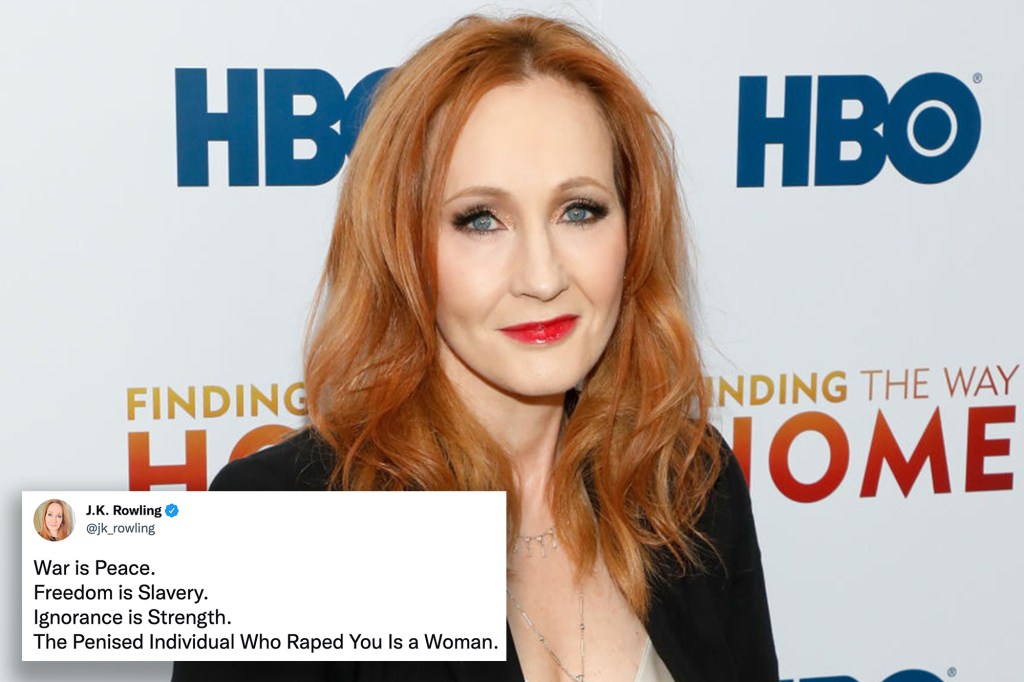 J.K. Rowling is causing controversy again, again wading into the debate about transgender people by criticizing Scottish police for allowing rape suspects to self-identify as female.

The “Harry Potter” author — who has previously been accused of making transphobic comments — took to Twitter on Sunday by sharing an article from The Times of London titled: “‘Absurdity’ of police logging rapists as women.”

“War is Peace. Freedom is Slavery. Ignorance is Strength. The Penised Individual Who Raped You Is a Woman,” Rowling wrote, referencing “Newspeak” in George Orwell’s “1984.”

She then linked to the news article, which stated, “Police Scotland said that they would log rapes as being carried out by a woman if the accused person insists, even if they have not legally changed gender.”

Thousands of fans immediately hit out at Rowling, with many accusing her of having an unhealthy fixation on trans issues.

“You literally have a castle and you spend your time doing this,” podcaster Rob Rousseau wrote.

“What a weird hill to die on Rowling,” producer Brett Erlich added.

A third chimed in saying that Rowling was focusing her attention on the wrong part of the story about rapes in Scotland, highlighting her prejudice and fixation.

“The vast majority of sexual assaults are committed by men who don’t identify as anything other than men. Perhaps you might consider using your public profile to combat this instead?” they stated.

The 56-year-old author was first accused of transphobia last June, when she poked fun at an article titled: “Creating a more equal post-COVID-19 world for people who menstruate.”

“People who menstruate,” Rowling mocked. “I’m sure there used to be a word for those people. Someone help me out. Wumben? Wimpund? Woomud?”

She later insisted “sex is real” before being described by critics as a TERF, or Trans Exclusionary Radical Feminist.

Rowling was lambasted by “Harry Potter” actors, including Emma Watson. She was also excluded from an upcoming HBO Max special celebrating the fantasy films.

However, that hasn’t stopped the Scottish author from expressing her views.

“Many women are concerned about the challenges to their fundamental rights posed by certain aspects of gender identity ideology,” Rowling stated in a Good Housekeeping interview last December.

However, in her latest dust-up, Rowling also received praise for her comments — with many prominent Twitter users thanking her for having the “courage” to speak out.

“Thank you for calling out the insanity,” Canadian political commentator Lauren Chen wrote.

“Thank you. You have no idea how important your voice is, or how much it means to women and girls,” columnist Susan Dalgety responded.

Rowling told Good Housekeeping last year that she’s been inundated with supportive messages for her controversial stance, saying he’s received a flurry of letters since speaking out on trans issues — more than 90% of which reportedly have been positive.