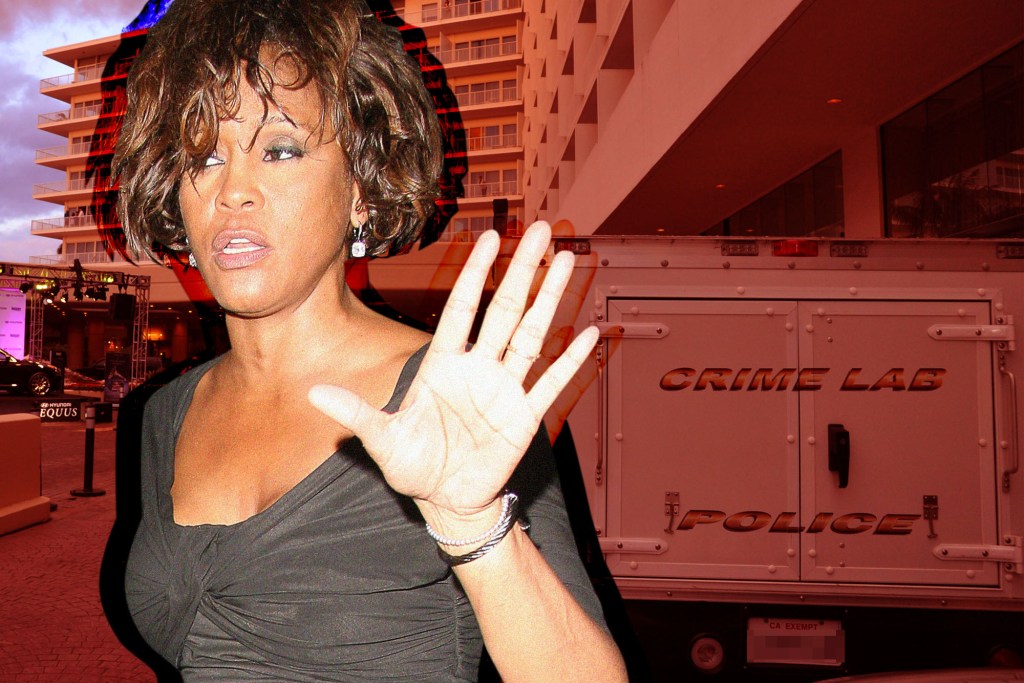 Two days before her death on Feb. 11, 2012, Whitney Houston showed up to rehearsals for mentor Clive Davis’ annual pre-Grammy gala, a glitzy night of music and mingling that she was planning to attend. The star-studded bash — which, held the night before the awards, is always one of the hottest tickets of Grammy weekend — was taking place at Los Angeles’ Beverly Hilton hotel, where the singer was also staying.

Houston’s longtime musical director Rickey Minor was putting the band through its paces for the event, and he noticed immediately that something was different about the woman who was like his “little sister.”

“She pops into rehearsal, and we hadn’t even started, and it’s 10:30 in the morning,” Minor told The Post. “Like, she doesn’t get up till the crack of 3, you know? She’s not a morning person. She loves her sleep, and she’s a night owl, so I never get to see her at 10:30. And she was kind of wet, like dripping. And I said, ‘Where are you coming from?’ She says, ‘I’ve been swimming. I’m getting my lungs back. I’m getting back in shape.’ ”

Houston claimed to be cleaning up her act, after years of drug abuse and smoking had taken their toll on her once-pristine pipes. But she was clearly lying to Minor — and perhaps to herself.

Indeed, the comeback that Houston was hoping to have after wrapping her upcoming movie “Sparkle” — a remake of the 1976 musical drama — didn’t happen. She died, at age 48, in the drug-filled bathroom of her hotel room just a few hours before the Davis party was due to begin. The cause of death was accidental drowning in the bathtub, but long-term cocaine use and heart disease were contributing factors.

The shocking passing of the pop diva who once possessed the greatest voice of all rocked that Grammy weekend, turning it into a collective mourning by the music world that had assembled to celebrate its biggest night of the year. Still, amid the surreal sadness, the Grammys carried on the day after Houston’s death.

“Your almost natural instinct right at the beginning was to throw the [originally planned] show out and make the show a tribute to Whitney Houston,” longtime Grammy producer Ken Ehrlich told The Post. “But that wouldn’t have been the right thing to do. So it was trying to find the blend between honoring her memory and then doing a Grammy show right.”

Kennedy recalled seeing Houston at the Beverly Hilton two days before her death. The star was in lively spirits when she crashed an E! News interview that Brandy and Monica were doing at the Davis party rehearsals. “In the moment, it was just like, you know, she’s having a good time,” he said. “She was there to see her little babies. But obviously, we now know that clearly she was not [sober].”

Later that night, Houston gave an impromptu performance of “Jesus Loves Me” at Kelly Price’s For the Love of R&B pre-Grammy event held at Tru Hollywood nightclub. It would turn out to be the last time she ever sang in public.

The next day, photos surfaced with Houston looking disheveled while leaving Tru. Minor got a call from Houston that day, but she didn’t leave a message and didn’t answer when he called her back. “I never talked to her again,” said Minor, who had formed a close bond with the singer since first working with her in 1982.

Minor got news of Houston’s death from the head of security at the Beverly Hilton. “He said, ‘Come with me.’ And we went to the service elevator, and we went up to the floor. And he said, ‘You know, she’s unconscious. She’s unresponsive.’ And then they cleared the floor, and I was the only one allowed to be on the floor. My head was spinning. Of course, I couldn’t tell anybody. It was an out-of-body experience to me … like some weird freak dream.”

A Grammys without Whitney

Ehrlich was busy at Grammy rehearsals when word of Houston’s death spread throughout the Staples Center. “I had two or three people come up to me with long faces,” he said. “And my first reaction was, ‘You’re kidding.’ Because those are things you think when the unthinkable happens. And I could see from their reaction that they weren’t kidding.”

At that moment, Ehrlich — like many who knew and were inspired by Houston in the music industry — felt a very personal loss. “It hurt me so deeply,” said the producer, who had first showcased Houston singing “Saving All My Love for You” at the Grammys in 1986. “We worked with Whitney an awful lot over the years. I felt like we had been there for her for so long. And I had watched, honestly, the steady decline.”

But Ehrlich and others at the Staples Center found comfort in LL Cool J, who was hosting the Grammys for the first time. “All of a sudden, here he is walking into a show that he was really looking forward to being a part of and being hit with what might have been, you know, the last thing that you want to hear when you were starting a new venture. But he was remarkable … He guided the vibe that was needed behind the scenes and on camera.”

In fact, it was LL’s idea to honor Houston’s memory with a moving prayer to open the Grammys instead of the monologue he had planned. “To be honest with you, I wasn’t so sure that was the right thing to do,” said Ehrlich. “But basically, they were his words.”

Meanwhile, Ehrlich immediately thought of Jennifer Hudson to perform a musical tribute to Houston and reached out to her. “She was getting dressed on her way to Clive’s party when we finally reached her. And she agreed to do it, very reluctantly. But obviously, [Houston’s death] had a profound effect on her.”

Hudson worked out the stripped-down performance of Houston’s classic “I Will Always Love You” with Minor in another room before Davis’ party. Meanwhile, other artists scheduled to perform at the Beverly Hilton ballroom — including Alicia Keys and special honoree Diana Ross — wondered if they should still do it while Houston’s body was still upstairs.

“I was grappling over what to do,” said Minor. “My input was that everyone will be grieving and mourning. So we celebrate her life separately or together — and we’re here. And if the artists are willing to do it, I mean, it’s a healing thing.”

But Kennedy doesn’t think that the Davis party should have gone on as scheduled. “I thought it was completely disgusting,” he said. “I have never gotten over the fact that this party happened. She’s upstairs, and the coroner is waiting to go up there and get her. It’s appalling to me. It felt like this weird Shakespearean tragedy unfolding where it’s like, this woman who was granted so little dignity in her lifetime can’t even die in dignity.”

At the Davis party and other pre-Grammy events around Los Angeles that Saturday night, Kennedy describes the mood as “like the apocalypse.”

Then on the morning of the Grammys — with stars such as Bruce Springsteen, Adele, Taylor Swift and Paul McCartney set to perform later in the day — Hudson arrived before everyone else to rehearse in private. “Before anybody came in, it would be a little bit less pressure on Jennifer,” said Ehrlich. “And it’s probably a good thing that I did it that way ’cause she couldn’t get through it. She broke down at least twice while we were rehearsing.”

Ultimately though, Hudson — backed only by a piano — delivered a stirring rendition of “I Will Always Love You.” But there wasn’t a dry eye in the house at the Staples Center. “She got through it, but all of us were crying,” said Ehrlich.

Although Adele was the big winner with six Grammys that night, music’s biggest night belonged to Houston. “That is a room full of people, many of whom have walked through doors that she opened,” said Kennedy.

And in the wake of Houston’s death, the Grammy after-parties were decidedly somber affairs. “That’s when it really set in,” said Ehrlich, “and it really hit us how impactful she had been — and how tough it was.”