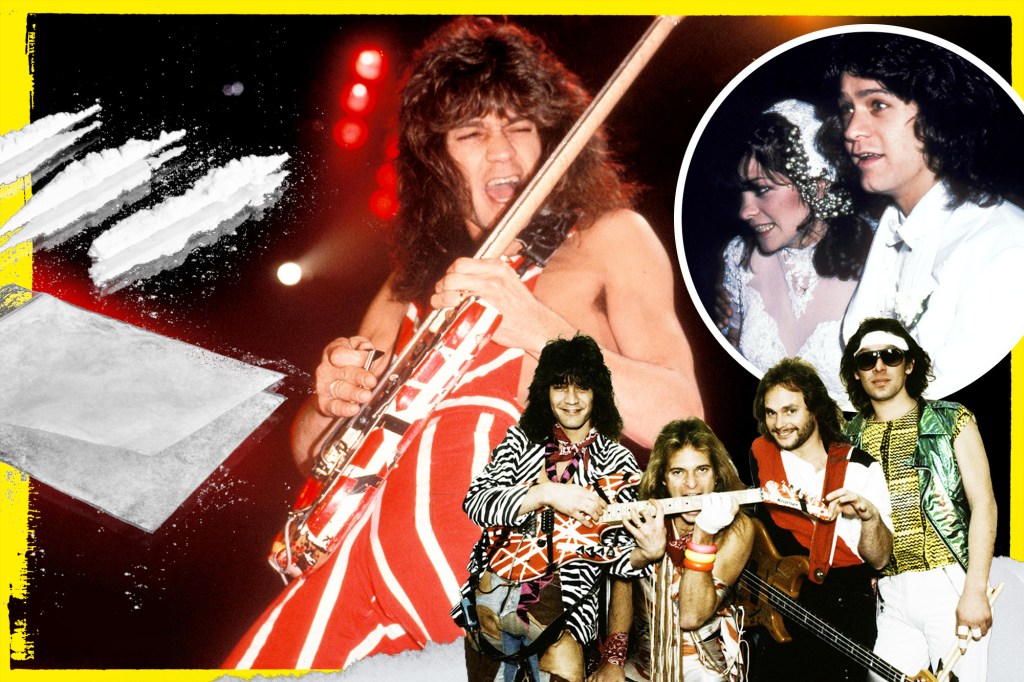 Guitar god Eddie Van Halen married “One Day at a Time” actress Valerie Bertinelli on April 11, 1981, with a $35,000 reception held at the mansion featured in Barbra Streisand’s version of “A Star is Born.”

But while the early days of their marriage saw them portrayed as a dream couple, a new book “Unchained: The Eddie Van Halen Story” (Permuted Press) by Paul Brannigan, out Dec. 28, shows how Eddie’s wild lifestyle of sex, drugs and rock ’n’ roll led to trouble from the outset.

The wedding became a party extraordinaire, as Eddie and Van Halen singer David Lee Roth did “fat bumps of [cocaine] in a restroom, ‘taking turns holding each other around the waist so [they didn’t] plunge head first into the toilet from dry heaving.’”

This scene would soon be repeated with Bertinelli, as tour manager Noel Monk discovered when he located the newly-married couple in the bathroom.

“There I found Valerie in her beautiful white lace wedding gown, looking every inch the angel — except for the tears streaming down her cheeks,” Monk recalls in the book. “Valerie was holding her husband’s head over a toilet bowl, pulling his hair back to make sure it didn’t become encrusted with puke.”

Eddie Van Halen, who died of cancer in October 2020, at age 65, was a groundbreaking guitarist who redefined the instrument like no one since Jimi Hendrix.

A Dutch immigrant who came to the US with his family in 1962 at age seven, Eddie played gigs with his father, Jan, and older brother, Alex, from childhood. At these shows, Jan ushered Eddie into an unfortunate habit that would define much of his life.

“My dad got me into drinking and smoking when I was 12,” Eddie recalled.

The brothers grew up to form their own band, with bassist Michael Anthony and singer David Lee Roth.

One of Van Halen’s first big opportunities came in early 1976, when they opened for British rockers UFO at the Golden West Ballroom in Norwalk, Calif.

They wowed the crowd and, after the show, a local drug dealer offered Eddie some “dynamite blow,” which he accepted. Ten minutes later, Alex saw his brother collapse, and ran to him. Eddie had unknowingly snorted PCP.

He went into spasms and was rushed to a hospital, where he was strapped to an operating table as an oxygen tube was forced down his throat.

“I actually died on the table,” Eddie later said. “When I woke up the doctor said, ‘Your heart stopped. If it was thirty seconds later, we couldn’t have brought you back.’”

Van Halen’s self-titled debut album, released in 1978 and recorded on a steady diet of morning beer and cocaine, introduced the rock world to its next legendary band, and the members tried every day to live up to the party attitude their music promised.

‘No one wore condoms, and it was just a big bone-fest, day after day‘

After playing their first out-of-state headline show at a club in Madison, Wis., the band celebrated by “laying waste to their accommodations on the seventh floor of the Madison Sheraton hotel,” Brannigan writes. “They hosted fire-extinguisher battles in the corridors, taped frozen fish to the ceilings and reduced the in-room furnishings to match wood,”

In May, while opening for Black Sabbath in Aberdeen, Scotland, the band received word that their debut album had gone gold, signifying sales of over 500,000 copies. They celebrated by getting “thoroughly s–t-faced on Glenmorangie whiskey.”

“We took shoe polish and wrote our logo all over the walls,” Eddie later recalled. “The next morning the cops came and escorted us out of the country, not because we wasted their hotel, but because one of our crew stole a pillow!”

Van Halen fell so deeply into their roles as emerging rock gods that at one point, someone captured a “graphic, X-rated, home-made [pornographic film] featuring the band members and enthusiastic female fans.”

According to Brannigan, this led to a bizarre incident where their manager, Marshall Berle — nephew of comic Milton Berle, who MC’ed the party at the all-nude strip club the Body Shop where the band were presented with their first platinum albums — showed the footage to staff at Van Halen’s label, Warner Bros. Records.

The band was so enraged by this betrayal that, in addition to firing Marshall Berle, they enacted an appropriately rock ’n’ roll revenge.

“[They] elected to retaliate by breaking into [Marshall’s] Hollywood office with Noel Monk and stripping the room of everything bearing the Van Halen name — gold discs, memorabilia, promotional items and more.”

“Everyone likes to think they’re the bad boys of rock n roll, but the things I witnessed with Van Halen were the most debauched,” said veteran rock photographer Neil Zlozower in the book.

“[They] had the hottest chicks you could imagine. There would be, like, 75 girls in the hotel room. Back then, it was pre-AIDS, no one wore condoms, and it was just a big bone-fest, day after day. Even just being the photographer, I got two or three chicks every night.”

In their 2013 memoir, Ann and Nancy Wilson — the siblings who front the band Heart — recalled meeting the brothers Van Halen in 1979.

“Eddie and Alex let it be known that if Ann and I wanted to sleep with them, they would be amenable to that,” Nancy wrote. “The concept was two brothers with two sisters … except they wanted us in one bed. It wasn’t the only time we had that offer, and as with every other request, we turned it down.”

For their 1980 tour, Van Halen changed their rider — the contract that dictates a band’s backstage requirements — to include a demand for M&Ms, with the provision that there be “absolutely no brown ones.” This became legendary, with many interpreting it as a sign that the band had gone off the egomaniacal deep end.

In reality, the outrageous clause had a greater purpose. The band’s technical stage requirements were precise and essential, and failure to implement them could cause the band harm. If their dressing room had brown M&Ms, they would know the rider hadn’t been read — and that they needed to review the stage set-up for their own safety.

For those who hadn’t read it, the repercussions could be severe, as the band applied their hotel-destroying expertise to backstage dressing rooms.

But the unusual provision had one very positive outcome, as without it, Eddie would never have met his future wife Bertinelli.

By the time Van Halen rolled into Shreveport, La., for an August 1980 show, the brown M&M clause had become iconic. A radio DJ happened offered local brothers David and Patrick Bertinelli — big Van Halen fans — tickets and backstage passes if they could “sweet-talk their celebrity sister into presenting each of the four band members with a bag of M&Ms backstage.”

Valerie, then 20 and a cast member on the hit sitcom “One Day At A Time,” agreed for her brothers’ sake. But at the venue, she was quickly enamored with guitar player Eddie, telling her brother Patrick, “Oh my God — what a cutie!”

The couple remained together for 20 years, separating in 2001 and divorcing in 2007. Eddie got clean for good around 2008, and married actress and publicist Janie Liszewski the next year.

Van Halen released one final, well-received album, with Roth on lead vocals and Eddie and Valerie’s son, Wolfgang, on bass, in 2012, followed by a successful worldwide tour.

To those that saw Eddie in action around this time, he played like a man who had finally put his demons to rest.

“His recent personal struggles seem to have been dealt with,” wrote Chris Epting for the heavy metal website Noisecreep.

“He looks a bit heavier, but a lot healthier, and he played with the joy of a teenager, losing himself in the music while ripping off one ferocious solo after another. It was like seeing Van Halen’s classic ’80s videos all over again.”