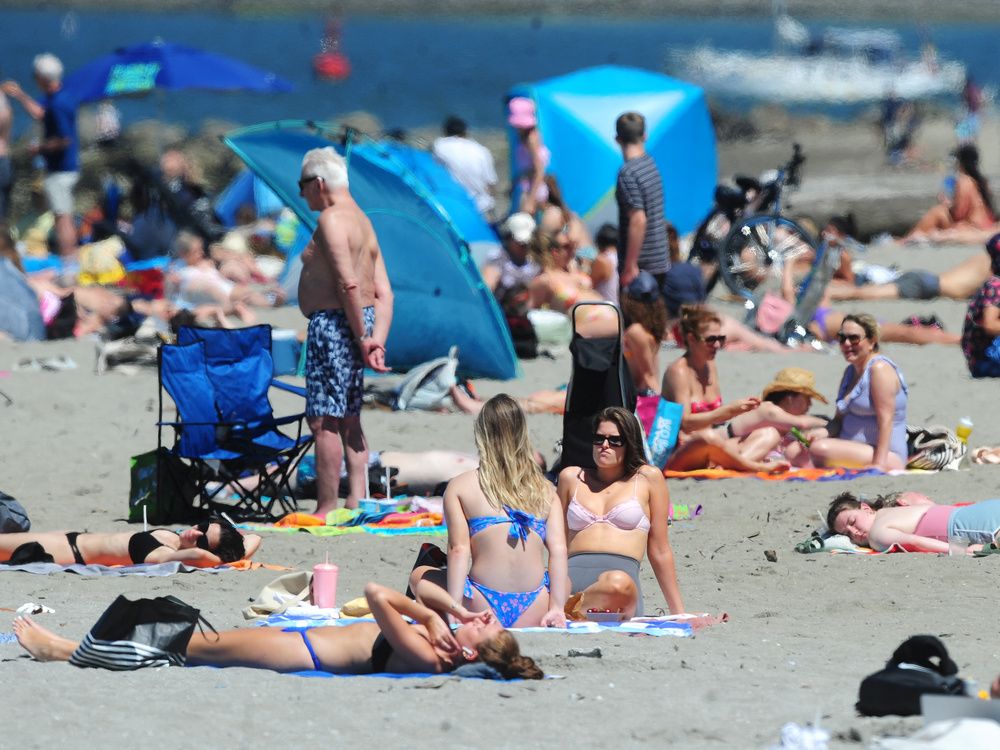 Vancouver’s beaches are expected to be packed today and tonight for the fireworks event.

But spectators camping out early to save a spot are being urged to come prepared to prevent heat-related illness as southern B.C. continues to swelter in a heat wave.

Shortly after noon Wednesday, Paul Runnals, executive producer of the Honda Celebration of Light fireworks festival, said he had already noticed fewer people setting up on the beaches, which he links directly to the heat wave. He said he anticipates more people will arrive in the evening as temperatures begin to cool off a little.

He recommends people going to watch Canada’s fireworks show on Wednesday and Spain’s show on Saturday take extra precautions before they leave the house.

“We’re encouraging people to be thoughtful about the heat and just make sure they’re staying hydrated and seeking some shelter — and if they do come down early, making sure they’re getting into some shade from time to time to make sure they don’t get overheated,” he said.

Temperatures in Metro Vancouver were expected to hit 36 degrees Celsius inland Wednesday or 29ºC closer to the water; however, Environment and Climate Change Canada said with the humidity, it could feel closer to 40ºC inland and 34ºC on the shore. For Saturday’s fireworks, temperatures are expected to be around 26ºC near the water and 33ºC inland.

Runnals said there is a water wagon set up near the A-maze-ing Laughter statues in Morton Park to refill water bottles, and ticketed events will also have extra water brought in. He said while the event doesn’t have space to erect shelter, there are many trees in the area to take cover under.

Southern B.C. is under a heat wave warning, with temperatures above 35ºC expected Wednesday through Sunday in some parts of the the region. After Sunday a cooling trend will begin, according to the warning posted early Wednesday by Environment and Climate Change Canada.

Several heat records have been set this week, including Lytton at 40.2ºC. Pemberton also had unseasonably hot temperatures at 37.1ºC on Monday and 39.1ºC on Tuesday.

B.C. Emergency Health Services said paramedics responded to 13 heat-related events in the province on Monday and 25 more on Tuesday. It did not say how long it took to respond to specific calls, noting responses are triaged based on the severity of the patient’s condition.

Metro Vancouver has also issued a poor air-quality advisory because sunlight is reacting with pollutants to create high concentrations of ground-level ozone east of Vancouver, potentially causing breathing difficulties for pregnant people, children, outside workers or anyone with conditions such as lung disease or asthma.

Meantime, drivers are also being asked to exercise extra caution as the number of cars breaking down on the road due to temperatures over 30ºC is up this month, according to BCAA.

Battery replacement calls to BCAA are up 13 per cent since the heat wave started because the hot weather is hard on batteries, according to Sara Holland, a senior communication manager at BCAA.

Holland said the number of cars overheating is up 15 per cent over June. Newer vehicles don’t usually overheat but high temperatures can put a strain on any vehicle, particularly older ones, she added.

Heat exhaustion can also cause problems for drivers, who may feel dizzy behind the wheel. A spokesperson for ICBC said the insurance corporation does not track the number of heat illness related traffic accidents.

Here are 10 tips from BCAA to prevent car breakdowns in the heat:

1. Plan your route. Long inclines and heavy loads drastically increase the stress on your engine and increase the risk of overheating. Try to limit towing heavy trailers to early in the day or later at night when temperatures are cooler. In addition, heavy stop-and-go traffic increases the likelihood of overheating so, if possible, try to find routes without as many stops.

2. Have your trusted mechanic check the level and concentration of engine coolant and top up as necessary. Check your owner’s manual to find the correct coolant type and strength for your vehicle.

3. Ensure the air conditioner is blowing cold air. If it’s not, you might want to get it checked for leaks, or it may require a flush.

4. Change your oil regularly to help prolong your engine’s life. Check your owner’s manual for the recommended service intervals.

5. Check the age and strength of the battery. Heat is harder on a tired cell than cold. As a guide, a five-year-old battery is usually nearing retirement.

6. Ensure tires are properly inflated and in good condition. Replace them if they’re cracked or low on tread. Don’t forget the spare.

7. Keep the gas tank more than half full. This will keep the fuel cool and not overwork your alternator.

8. Use folding sunshades when parked to lower the temperature inside the vehicle.

9. Slow down on the road. This saves gas and reduces the likelihood of the engine overheating.

10. Be prepared for a breakdown. Carry water, food, a fully charged phone and some type of portable shade, such as a hat or umbrella.

Here are some suggestions/reminders from the City of Vancouver for watching the fireworks:

• When it is very hot, remember to stay hydrated, even before you feel thirsty. There are over 200 permanent fountains across Vancouver, with more temporary ones added during summer months.
• Remember to bring a reusable water bottle with you, however, there will be bottled water available for purchase from vendors on-site.
• Take it easy and stay out of the sun as much as possible during the hottest hours of the day.
• Dress for heat. Wear a wide-brimmed hat, lightweight, loose-fitting clothing and sunscreen.
* Help people who might be in distress when you’re out and about. If you see someone suffering as a result of hot weather, try to help the person hydrate, get to a cool place and apply cool water to their skin.
• If someone has heat stroke symptoms, call 911 and apply cool water to their body.
• During heat events, City staff working outdoors in the community will look out for people suffering heat-related illness.
• Barbecues, including propane barbecues, are not permitted in English Bay between the entrance to Stanley Park and the Inukshuk to ensure fire safety, particularly in this hot weather.
• We remind attendees that the consumption of alcohol is not permitted on any beach in Vancouver and could exacerbate dehydration during the hot weather.
* Please help our clean up crews and put any garbage in the bin or take waste home with you. We encourage attendees to use reusable containers where possible, including reusable water bottles.