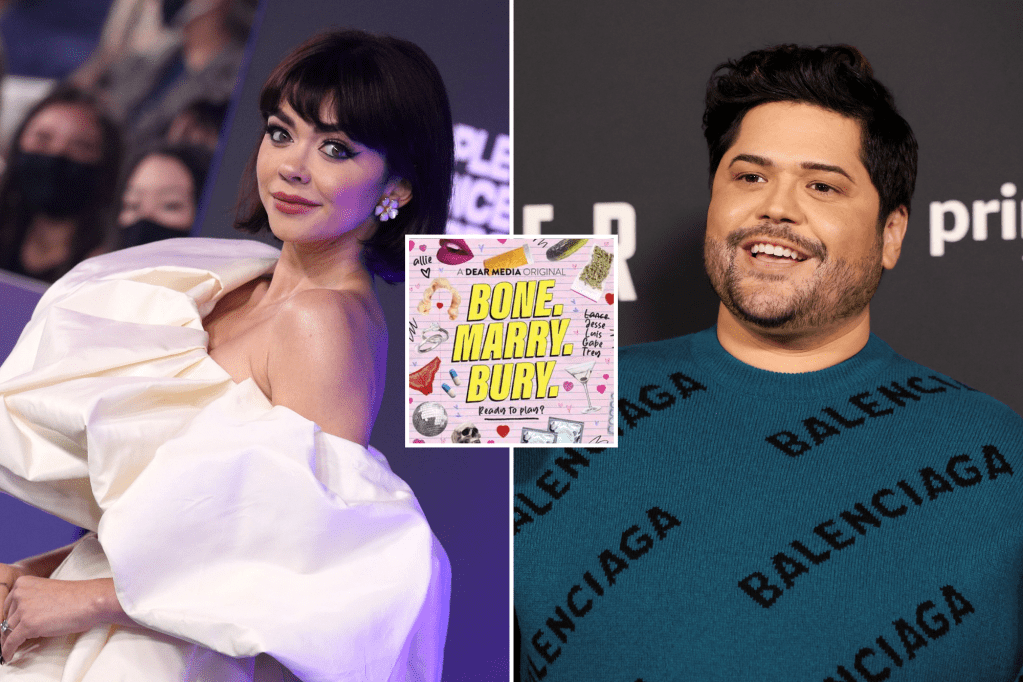 Harvey Guillén and Sarah Hyland are camping out in the new podcast “Bone, Marry, Bury.”

Here’s the skinny: Allie heads out to a New Year’s Eve party to get drunk — and forget about losing her waitressing job, getting dumped and being evicted from her apartment. The series title is a play on the social media game “Kiss, Marry, Kill” (a raunchier four-letter word can be used in lieu of “Kiss”). When all is said and done, Allie checks off every box on that list … “Bone, Marry, Bury” … with three people at the party.

“She’s basically this girl who Gabe loves and she has a wild side and has a way of finding herself in predicaments — and, with the help of Gabe, she gets out of them,” said Guillén, 31, aka Guillermo from “What We Do in the Shadows.” “It’s just super-fun from beginning to end, and I sing karaoke in it, so I was like, ‘Sign me up!’”

“Bone, Marry, Bury” marks Guillén’s entry into the scripted podcast genre which, he said, is an about-face from filming a television show or a movie.

“It’s very engaging,” he said. “With film and TV, you rely on subtle moments to convey the emotions through your face, your mannerisms or what you’re doing. When you’re doing that through a podcast … it has to be in your voice, which has to convey anything that moves or that projects the story going forward, whether you’re setting listeners up for suspense or fear — it’s always in your vocal cords, in that emotion delivering the lines.

“It’s very taxing and exhausting,” he said. “People go, ‘Oh, it’s a podcast, it’s easy, you’re just talking.’ It’s really not — you really have to focus, enunciate and make sure you don’t throw away a line.”

Guillén snared the role of Gabe while he was in Toronto, filming his role as Jasper in the new Prime Video series “Reacher,” starring Alan Ritchson.

“I was shooting [‘Reacher’] when we were recording this, so I would go in on my days off and do the recording, sometimes with Sarah, who was in LA,” he said. “With the technology, we could be in the same room with the director on a third screen — it’s very doable and safe.”

It’s been a whirlwind year for Guillén; he and his “What We Do in the Shadows” co-stars have already shot Season 4, which will air later this year.

“It was the first time in our history that we shot two seasons within 10 months,” he said. “We shot [Season 3] January through early May, and while I was [in Toronto, where the show films], ‘Reacher’ asked if I wanted to join their already wonderful cast. At first I hesitated — I really wanted to go home because everything was in lockdown … but they said, ‘You would bring such a great element to the character — he’s Southern and he has an accent and he’s Latino and I was like, ‘Whoa, you rarely see that.’

“So in the span of 10 months we did Season 3 of ‘Shadows,’ I went straight to ‘Reacher,’ when I was shooting that I recorded [‘Bone, Marry, Bury’] and went straight into Season 4 of ‘Shadows’ in the fall through Christmas — and that’s how the year ended.”

“Bone, Marry, Bury” is produced by Dear Media Studio in conjunction with RomComPods. It’s available on all major platforms.