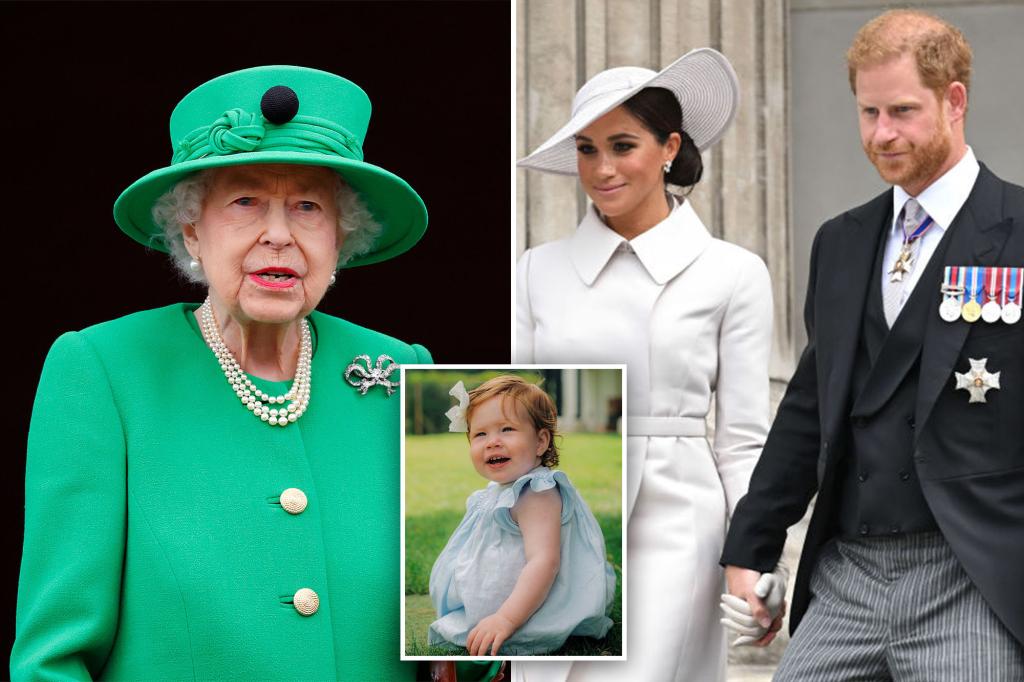 Depending on whom you ask, Prince Harry and Meghan Markle were either cruelly rejected by royal aides when they asked Queen Elizabeth II to pose for photos with their daughter Lilibet Diana last week — or they were just too polite to bother her royal grandmum majesty.

Contradicting claims over an alleged picture request have gone viral since the California-based couple introduced baby Lilibet, 1, to the queen for the first time last Wednesday, after jetting to the UK to partake in Platinum Jubilee celebrations.

Reports from multiple other outlets claim Harry, 37, and Markle, 40, wanted their personal photographer to take happy snaps of the queen and Lilibet — but were shut down. According to one anonymous source, they were told: “No chance. It was a private family event,” the Sun originally reported. That leaker also claimed the queen’s minders were worried that Harry and Markle would leak the photos to US television networks.

However, a source with knowledge of the situation told The Post that claim is bunk.

“They just enjoyed a private and intimate visit with the queen,” the source said, adding that Harry and Markle didn’t even bother with asking for photos as the 96-year-old monarch wasn’t feeling well.

Elizabeth’s Communications Secretary declined The Post’s request for comment about the conflicting reports.

Lilibet — who celebrated her first birthday while in the UK — is the monarch’s great-granddaughter and namesake.

The source told The Post that Harry and Markle also took Lilibet to meet Elizabeth for a second time on Friday.

The following day, the couple held a small party for their daughter to mark her first birthday. They subsequently released a photo of the tot, which was taken at that celebration.

The birthday portrait is only the second photo the couple have released of their daughter after she was featured on the family Christmas card last year.

While Harry and Markle are said to enjoy a warm relationship with the Elizabeth, their ties with other royals are far more strained.

The couple — who notoriously quit royal life back in January 2020 — trashed the royal family in an infamous interview with Oprah Winfrey 14 months ago.

During that sensational sit-down, the aggrieved couple leveled accusations of racism at one unnamed member of the royal family, saying there were “concerns about how dark” their son Archie’s skin would be.

Meanwhile, Markle claimed she was silenced by employees of the family and claimed sister-in-law Kate made her cry during a tiff about flower-girl dresses ahead of her wedding to Harry.

It’s unclear whether the two women have had any contact since the bombshell interview.

Harry, meanwhile, is said to be estranged from brother Prince William.

Harry and Markle’s visit to the UK was brief, with the pair touching down in the country partway through last week.

On Thursday, the pair were barred from appearing on the Buckingham Palace balcony alongside the Queen, Prince Charles and other senior members of the royal family.

On Friday, the couple were booed as they appeared at a Jubilee event at St Paul’s Cathedral.

Meanwhile, the couple flew out of the UK on Sunday, before the Jubilee celebrations had even wrapped up.