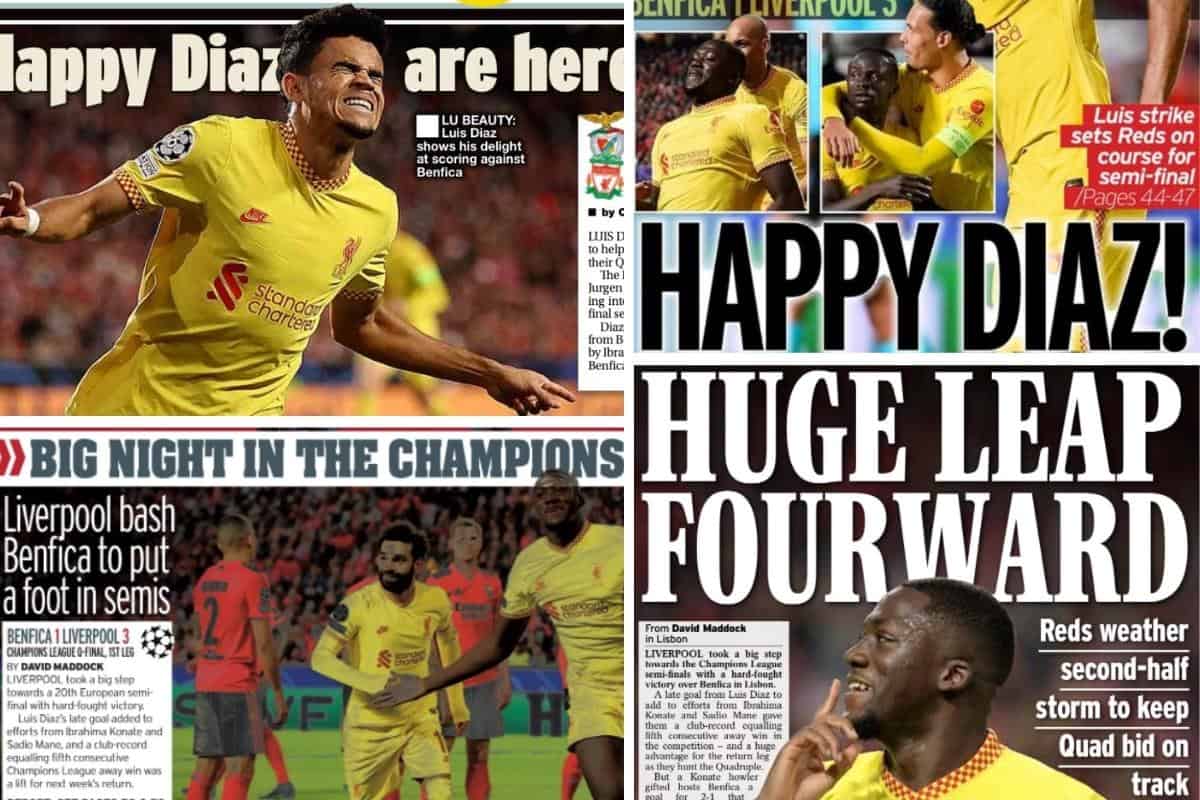 Liverpool picked up a hard-earned 3-1 victory at Benfica on Tuesday night, as certain individuals were singled out for praise by the media.

The Reds were favourites to prevail at the Estadio da Luz and they did just that, in what was a hit-and-miss performance.

Goals from Ibrahima Konate and Sadio Mane saw Jurgen Klopp‘s side take complete control by half-time, but Darwin Nunez pulled a goal back after the break.

Liverpool regained some composure, though, and Luis Diaz rounded off a good night with a nicely-taken effort late on.

Here’s a look at how the media reacted to the Reds’ fifth away Champions League win in a row.

A hugely productive evening was lauded by some…

“On a night when any win would have done, a two-goal triumph represents a huge success for Jurgen Klopp and his side.

“They were made to work for their advantage, mind.

“Liverpool deserved the win, and they deserved at least a two-goal cushion as well.

“They were breathtaking at times in the opening 45 minutes and had they been a little more clinical, things could have gotten really messy.”

Andy Hunter of the Guardian felt it was an imperious all-round showing:

“Liverpool were a model of composure from the first whistle, with neither the raucous atmosphere inside Estadio da Luz nor six changes from the team that beat Watford in the Premier League on Saturday able to disturb their rhythm.

“Such is the strength at Klopp’s disposal as they enter a defining phase of the campaign. His team had to deal with moments of individual menace from Benfica’s forwards but otherwise they were in almost complete control throughout the first half; quicker and stronger in the challenge, better structured and the more cohesive attacking unit.

“But for a few lapses in front of goal and interventions by Benfica goalkeeper Odisseas Vlachodimos, the quadruple chasers would have had the entire tie sewn up by half-time. They had to settle for a two-goal cushion instead.”

The Daily Mail‘s Ian Ladyman feels the tie is all but done and dusted:

“This was a game that finished as it started. Liverpool on the attack, Benfica struggling to cope. The gap in class evident and painful.

“But in between, for a period of about 25 second half minutes or so, Benfica had raised themselves to energise their terrific home crowd and turn this in to frenetic, dramatic and very watchable European contest indeed.

“You could argue that a team playing in the last eight of the Champions League should be able to engage fully with an opponent for longer than that, especially when playing at home.

“You would probably be right and the fact Benfica could not do that reflects their modest domestic standing – third in the Portuguese league – and tells us this tie is now all but over ahead of next week’s second leg at Anfield.”

This Is Anfield‘s Mark Delgado enjoyed what he saw from Liverpool’s ‘NFT’ midifeld:

“At last, many fans’ deepest, darkest desires were met by Jurgen Klopp: Naby Keita, Fabinho and Thiago together in midfield from the start.

“We’d only seen them for a few minutes previously, but in they came to very good effect at the Luz.

“On the ball, both No. 8s were a little loose early on, but both also had some magic moments and through balls – Keita’s to Diaz for a one-on-one being the pick.

“Naby should have scored a header too, but getting into great areas repeatedly was a huge positive. More important for the midfield is their off-ball work and this trio excelled.

“Direct challenges saw all three come out on top repeatedly, while together they worked well at tracking back, following runners from deep and bringing the ball out of defence.”

Mark Critchley of the Independent also touched upon the midfield trio:

“One foot in the semi-finals? Perhaps. Diaz’s late contribution on his return to Portugal probably makes Klopp’s selections for next week’s second leg somewhat easier, potentially allowing others to be rested before that FA Cup semi-final.

“It was an important goal, scored after rounding goalkeeper Odysseus Vlachodimos, and crafted by a surging run through midfield by the excellent Naby Keita.

“In a week when Liverpool’s non-fungible token made a less than impressive debut, Keita, Fabinho and Thiago started together as a midfield three for the first time and it is fair to say this NFT launch was more successful.

“Keita had an immediate impact on proceedings, linking play on the edge of the box and turning up late in it as Liverpool made a flying start full of attempts on goal.”

And The Anfield Wrap‘s Ben Johnson hailed Keita in his post-match ratings:

“Could have feasibly had a hat-trick first 20 minutes. Great in that inside right channel, they couldn’t cope with him first half.

“Drifts a little second half when The Reds go a bit mad, but then so does everyone else. One of the first to get his foot on the ball again and get The Reds ticking over.

“Great for the third. Wins it back first and foremost and then creates the goal by marching up the pitch. Boss.”

Focus also turned to a relentless run ahead…

The Telegraph‘s Chris Bascombe admitted an improved performance is needed at Man City this weekend:

“Liverpool’s players seemed quite subdued at the end.

“The epic showdown with Manchester City is upon them. They will reflect on this night knowing that only 100 percent, not 75 per cent perfection will get the job done at the Etihad.”

While Delgado looked ahead of a defining period with both excitement and trepidation:

“Benfica twice, Man City twice – it’s a hell of a run of games we’ve got, with United and Everton to follow.

“One game at a time though, Reds.

“What the result does here is keep us in the hunt for a semi-final berth, nothing more.

“But what the performance might do as a whole is serve as a well-timed reminder that Liverpool, however good they might be in one part of a game, have to maintain the level to take victory.

“Man City will be a lot tougher than Benfica, you’d expect, but a showing similar to that of the first half might just be enough to turn the title fight on its head.”