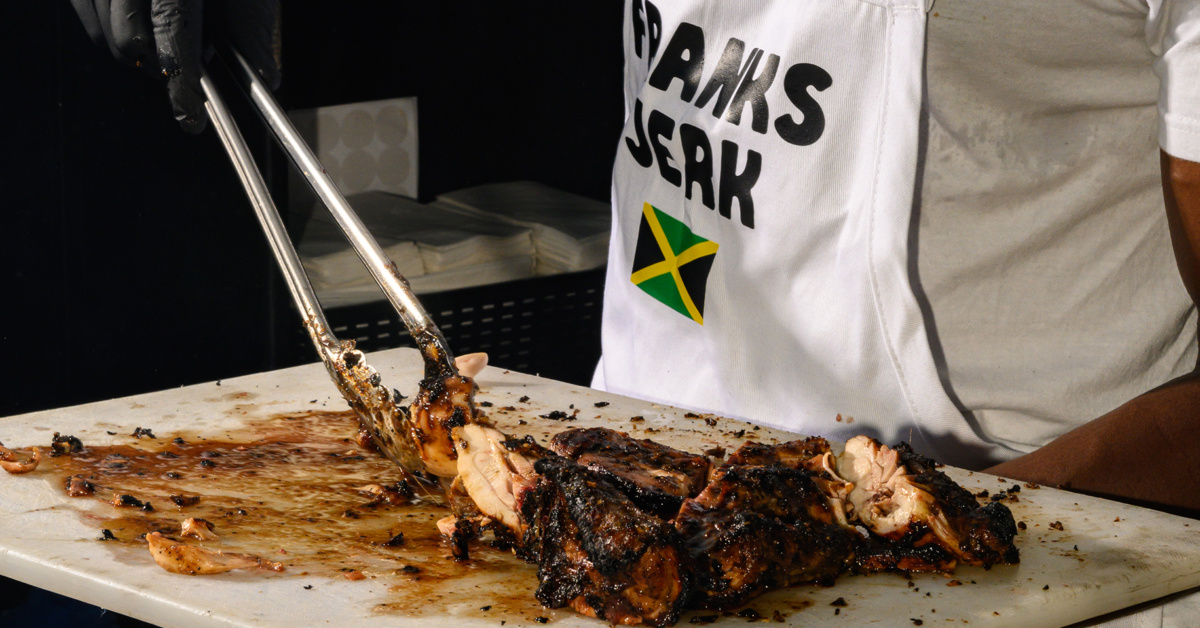 The sort-of secret: Frank’s Jerk, a Jamaican chicken pop-up at Churchill Bar
You may have heard of it if: You’ve walked down Dundas West on the weekend and happened upon Frank Sutherland grilling outside
But you probably haven’t tried it because: It opened during the pandemic and operates only between 6 p.m. and 11 p.m. from Friday to Sunday

You’ve probably heard some version of this before: the pandemic hits; a Torontonian with extra time on their hands takes up an old hobby and suddenly realizes they could turn said hobby into a viable small business. Well, that’s exactly how Frank’s Jerk, a one-man Jamaican chicken operation, came to be.

From Thursday to Sunday, starting at 6 p.m., you can find Sutherland behind the grill at the corner of Dundas and Lakeview, a plume of smoke overhead, billowing with the wind. “By the time I turn on the grill, they can smell it all the way down Ossington,” he says.

He chops up the chicken and serves it with a side of hard-dough (pronounced “hardo”) bread for $14. It’s a simple set-up: a three-sided stand with a grill, a couple of food warmers, a light and a washing station. Sutherland also slapped a big Jamaican flag on the front—part marketing, part mission statement.

More than anything, Frank’s is a good hang. Churchill customers come out onto the streets, a little bit buzzed, to stand around, chat and maybe buy something to soak up the booze. Passersby yell hello to Sutherland like he’s an old childhood friend. It’s good vibes all around.

So where did Sutherland learn to cook? Well, he was a serious basketball player back in the day, a shooting guard with a big vertical, the son of two Jamaicans immigrants. He grew up in Toronto but played college ball in the states. While there, he had a grill in his room, which he used to make chicken and white rice. He called his mom to get her jerk recipe and sold it to his basketball teammates for $5 a dish, an experimental sophomoric version of Frank’s Jerk. “I always loved doing it, brother,” he says.

Sutherland’s hoop dreams died when he injured his groin. “Tore it right up,” he says. So, in 2009, he came back to Canada and coached his 10-year-old nephew’s basketball team, among other jobs. Fast forward to just before the pandemic: Sutherland was working at Churchill—bartending, bussing, cleaning, pretty much all of the nitty-gritty stuff. He also worked construction for Metrolinx on the side, helping to build the new LRT on Eglinton.

When everything shut down, he spent a lot of time grilling at home. One night, during a small gathering with friends, he made a batch of chicken and everyone suggested he start selling it at Churchill. And that’s what he did. The first real test was the most recent Dundas West Fest, and Sutherland aced it, going through 1,700 pieces of chicken. “It was rapid fire,” he says. “And, once I realized this could work, I thought, Hey, might as well work for myself.”

In the long term, Sutherland hopes to expand the operation. He thinks a restaurant with 10 to 15 tables would be perfect. “I’ve still got that basketball mentality, like, ‘Go big or go home,’” he says. “But, if you go too big, you lose the sanctity of it, right?”

So, about that chicken. First, Sutherland slathers it in a homemade rub, which contains 28 ingredients. “Scotch bonnet, scallions, red onion,” he says. “I can’t tell you too much, though. I don’t want to give away the recipe.” (Fun fact: he initially tried to sell his homemade marinade at Loblaws, but it didn’t work out. Their loss.)

Sutherland tries to get a good char on the skin, cooking it at roughly 400 degrees Fahrenheit. He buys all of his chicken from Nosso Talho, a Portuguese butcher nearby. “You gotta try to keep the circle tight, right?” he says.

Then he adds a bit more marinade, careful to keep rotating the chicken so it doesn’t burn. He uses Cowboy charcoal, which he buys from Augusta Fruits, in Kensington. “I like it because it has that hickory taste,” he says.

The chicken takes about 20 minutes to cook. At that point, Sutherland chops it up and puts it back on the grill so the insides can get a char.

Here’s the result: four pieces of chicken and and a generous helping of hard-dough bread. Enjoy it with a drink (or three) from Churchill.